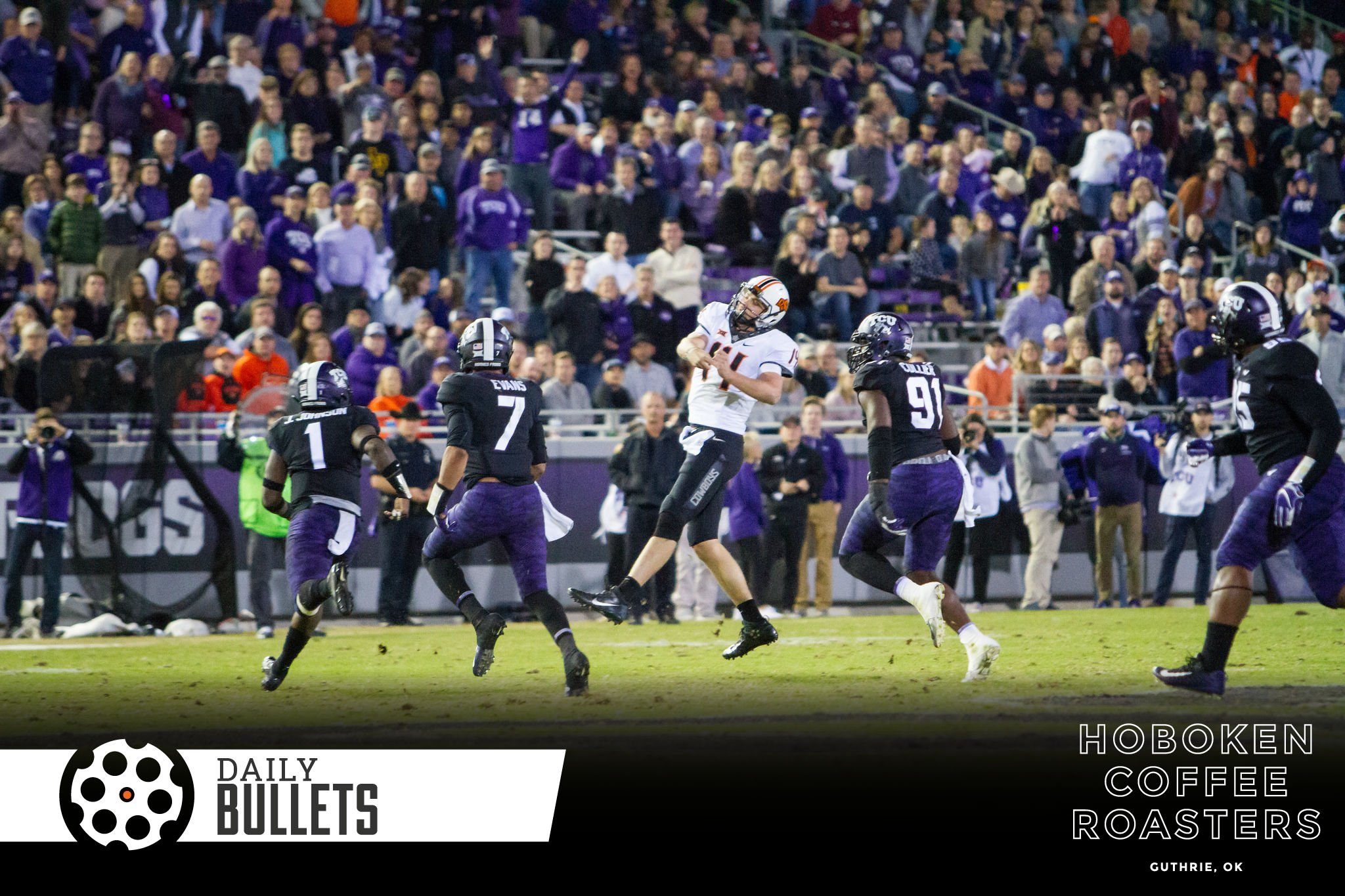 Bowl season – and this creepy face shot of Urban Meyer – is here.

The Liberty Bowl is kind of intriguing and kind of not – so many things to go back and forth on with the New Year’s Eve game.

This is a surprisingly good game, that is if Oklahoma State decides to show up. I can’t tell with this team this season. But it’s a Big 12 vs. SEC game, but it’s also a battle between former Big 12 foes. Missouri has a quarterback in Drew Locke who should be in the discussion as one of the top QBs in the 2019 NFL Draft. I’d love to get at least a little bit of a look at OSU QB Spencer Sanders, but that seems unlikely. [HCS]

If you told me the Spencer Sanders era was about to begin…. must-see TV. Locke vs. Cornelius could be fun (if passionate/engaged Cowboy team shows up). Playing the SEC is fun but there’s a little fatigue playing an old league-mate. I’ll be watching but I’m not sure the CFB universe will be hanging on every play.

Mike Gundy is a quote/publicity machine, and he’s as Pat Jones likes to say “dumb like a fox”. Sometimes his commentary seems unnecessary, sometimes it’s a hit for the program. And sometimes he comments on things and we’re better off for hearing his thoughts – like these comment on Purdue’s cancer-fighting superfan Tyler Trent.

“Some people in life don’t get dealt the hand that we all expect them to, and it’s extremely difficult, so I think we’re all responsible for trying to make it better for those people,” Gundy said. “Purdue and coach (Jeff) Brohm, they’ve done an unbelievable job of making his life and his days much better, so I really enjoyed the 5-minute conversation I had with him and his mom and dad, and he said he would cheer for Oklahoma State, so that made me happy.” [NewsOK]

It’s wild that even losing games has you better off in rankings systems.

#OKState, at 72, is the only team in the top 100 with a losing record. It's actually better than OSU's RPI on Selection Sunday last season. https://t.co/hXkvaB2mhE

You just love to hear stories like this – where folks use the opportunities that athletics provide them and use them for a better life. Congrats to Mr. Carter. After watching the last Mississippi season of Last Chance U, this one is fun too.

Proud moment man, first one in my family on both sides to do this, and also come out on top. So many emotions, I didn’t even think I could keep a straight face long enough to take the picture. Leaving a great legacy ?? Thank You, proud Alumni ? fist of many blessings to come ?? pic.twitter.com/6zfkklrDEN

Brodrick Brown’s mildly impressed by this.

Keenan Brown – the former Poke – headed to the league after a whale of a year in San Marcos.

Keenen Brown enters the draft after finishing this season as the highest-graded tight end in all of footballhttps://t.co/a5u9MpNuy9 pic.twitter.com/MYv3p5niTF

ESPN’s no. 1 recruit committed to Oregon yesterday – you just know Arroyo had something to do with it.

Well damn. Mario Cristobal and his staff sure can recruit. Ducks are gonna have their highest-rated class in school history, currently No. 7 per 247Sports Composite. https://t.co/A7agNQ517e