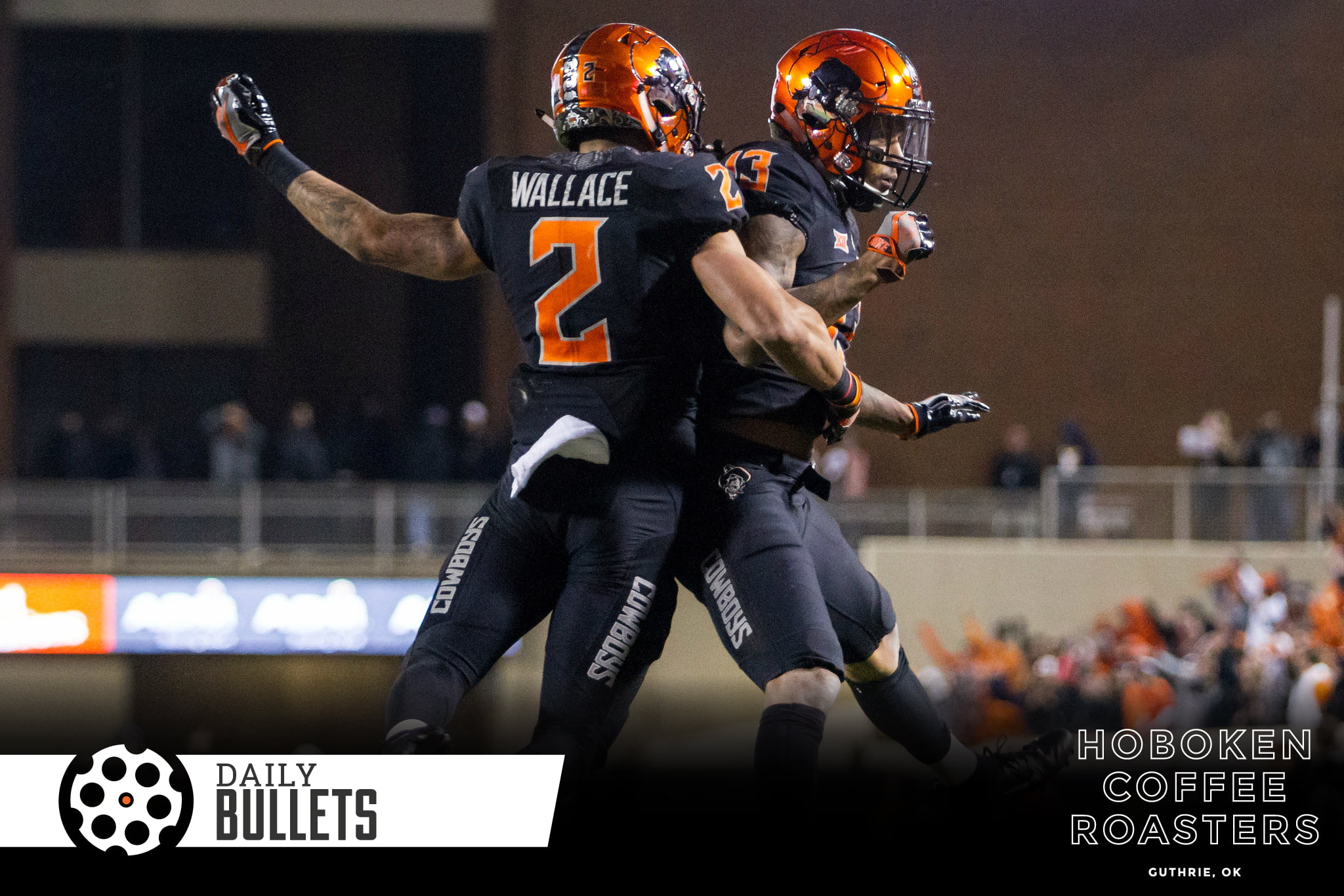 Good morning! If you aren’t signed up to get our daily newsletter, you can do so right here. You can expect these very Bullets, condensed, but you can also expect a few surprises and fun things from us that you won’t see on the site starting January 1.

• Nathan Ruiz wrote a nice piece about Britton Abbott today in the Oklahoman.

His mom sees an innovator. His dad sees an inventor. They’ll both miss Saturdays in Stillwater, with family in Oklahoma City and Tulsa often coming to games, as well.

“It’s just been the best family building experience,” Shari said. “Instead of just seeing each other for Christmas, Easter and Fourth of July, our family got to spend time together every game.” [NewsOK]

This familial aspect of CFB is not exactly a hidden narrative that we don’t notice, but it’s one that maybe we (I) don’t pay enough attention to. Transformative years for so many of these students.

Not now. In Memphis, OSU and Missouri fans will see an opponent that jogs lots of memories and lots of emotions. Last year, the Tigers played Texas in the bowl game, and “everybody hates Texas,” Becking said, “so that’s not strange at all. It’s easy to go down there and want to beat those guys. But the old Big Eight teams, it is strange.” [NewsOK]

I didn’t realize how much vitriol Mizzou fans had for Texas!

• RA does the Dez-Tylan thing. Not here for it, but I do appreciate the practice notes.

This week in practice he has been drawing the attention of everybody. He’s making plays in practice that are better than what I remember Dez Bryant making. He made three catches on Friday, two diving, that were flat out insane. “Three of the best catches you’ll see anywhere,” said Johnny Barr, long-time coach and now fundraising assistant to head coach Mike Gundy. [Go Pokes]

I would like to see the things Dez would do in the post-2010 OSU offenses when they were less concerned with run/pass equivalence and more concerned with getting the ball to as many playmakers as possible as often as they can.

• I wrote about two things over the past two days. The first was a year-end mailbag answering some golf questions. Rickie Fowler was involved. I was asked which of the non-major winners I think is the best bet to win one in 2019.

I think if my life was on the line with this question, I’d probably go with Rahm; although, I think the course rotation in 2019 would favor somebody like Tommy Fleetwood or Rickie Fowler. It’s so easy to see Fleetwood winning one of the Opens that it sometimes feels like it’s already happened. I’ll say Fleetwood for 2019 but Rahm if I have to pick somebody for the rest of their career. [CBS Sports]

I also ranked Fowler third among best players currently without a major.

• The second thing I wrote about is the power structure in Stillwater, which I could write about for weeks. I got a great question via email about my Gundy-Holder thoughts, which of course is like catnip for me.

All of this is incredibly fascinating to me, too. I’m endlessly intrigued by power, and there is clearly a wrestle for it in Stillwater. Gundy approached this year as if he has never had more of it (which is probably a reality), and yet he’s about three 50-50 games away in 2019 from some legitimate “wait … are we sure this is the right thing” talk being on the table. [PFB]

• How many future professional wideouts did OSU have on its 2017 team? It’s starting to look like maybe five.

Congrats @Gifted_CLacy! This is great news. Super smart young man and works his butt off. We are so proud of you. #GoPokes #okstate https://t.co/4hgyK4P8JC

• This paragraph from Kottke fascinated me.

I think it ended when the Google Books settlement died, leading to Google Books becoming, basically abandonware, when it was initially supposed to be the true Library of Babel. I think that project, the digitization of all printed matter, available for full-text search and full-image browsing on any device, and possible conversion to audio formats and chopped up into newsletters, and whatever way you want to re-imagine these old and new books, remains the gold standard for the future of the book. [Kottke]

• John Saddington wrote on decisions and how he makes them.

I had some ideas but my own process for deciding what (and when…?!) I should do with my own time! It did remind me of a quote I was told and I repeated this to him: Try a ton of different things. Then, focus more energy and time on the things that are working. That’s it. [Saddington]