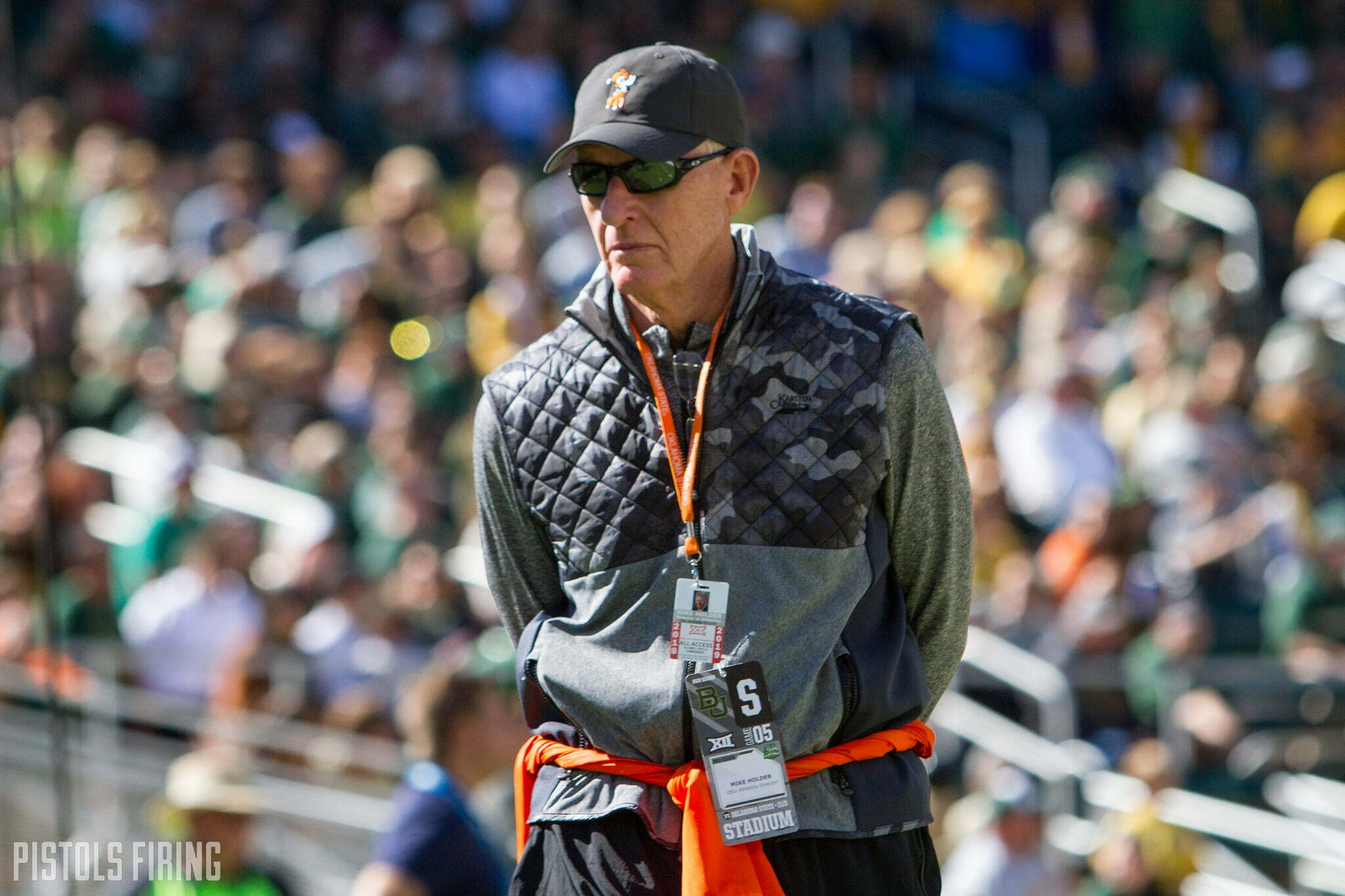 Here’s a good question from a loyal reader that I thought deserved its own post.

I’m looking over OKC Dave’s post-season survey results and after looking at Gundy’s approval % I had a couple thoughts. I agree with everyone that this seems to be a knee jerk reaction and a lot of disapproval relates to the QB situation and not the program overall.

First off I want to say I’m not calling for Holder to fire Gundy and my guess is that they probably don’t talk that much. But given the year OSU just had do you think Holder is starting to put more pressure on Gundy?

When Holder came onto your podcast he said he didn’t like how Gundy recruited but given the success OSU had between 2015-2017, it’s hard for Holder to really force Gundy to change. Now after a bad year do you think Holder will expect changes from Gundy or do you think he will let Gundy just keep doing his thing regardless if it is not what Holder thinks is best?

Their relationship fascinates me, and given that Gundy basically can’t be fired makes it even more intriguing. But I still wonder how Holder feels and what/if he is doing anything about it.

• I don’t think Gundy and Holder interact much after 12-win seasons, 10-win seasons or 6-win seasons. I just don’t think their paths cross very often in the natural flow of both of their jobs. They’ve both essentially said as much.

• I don’t think one year is enough for Holder to put a ton of pressure on Gundy, especially with the bank of goodwill he’s built up (and massive contract he has). Two years, though? That could be a real thing. I keep going back to this, but what if OSU goes 5-7 next year? What if that happens? Then what? Which leads me to …

• Gundy’s “lifetime” contract. The way I understand his rolling five-year deal is that it auto-renews until OSU decides for it to not auto-renew. As an aside: What if Holder forgets to cancel the auto-renew like I forget with my Spotify or Netflix or whatever and accidentally gives him another year. Is that how it works? ?

Regardless, OSU has until January 7 to renew the deal for another year, which they will undoubtedly do (remember: it’s not just about Ws and Ls to the OSU administration … Gundy has always sold tickets pretty well and made OSU a lot of money).

This perpetual, rolling five-year contract will remain in effect unless — and this is straight from the contract — the university provides written notice to Gundy within seven days of the final game of the season. [Tulsa World]

• All of this is incredibly fascinating to me, too. I’m endlessly intrigued by power, and there is clearly a wrestle for it in Stillwater. Gundy approached this year as if he has never had more of it (which is probably a reality), and yet he’s about three 50-50 games away in 2019 from some legitimate “wait … are we sure this is the right thing” talk being on the table.

I’m sure he’ll go out, and Spencer Sanders will pull rabbits out of helmets for four straight months and OSU will be prepping for a NY6 bowl 12 months from today because we’re talking about all of this. But at some point the dream run ends, which means some point is also the beginning of the dream ending. Are we there? I have no idea. I hope not. I don’t think so. But maybe.

• The question I go back to is, “if you could erase Holder’s memory of the past, which of the Mikes (Boynton and Gundy) would he pick to keep if he could only pick one?” As Kyle Cox pointed out, they’re both about to be 6-6 in a week or so, but one is recruiting the lights out, and the other … is not. While I don’t think winning at recruiting is everything, it’s certainly more than Gundy (and some of you) think it is. And the person who matters most — Holder — not only believes that but has lived it, too.

• To actually answer your question, I think Holder would give Gundy a 7 out of 10 approval, down from an 8 this time last year. Holder doesn’t strike me as the type of person to overreact to four months of ball with 14 years behind a man, but he also doesn’t strike me as the kind of person who has much time for snowflake talk and Duck Dynasty GIFs when OSU could only bag two of the top 500 players in the United States.

• While we’re here! Gundy’s buyout would be around ~$16 million if, say, he was fired after the Liberty Bowl. Obviously that won’t happen, but I wanted to provide a little context for the situation we’re talking about and point out just how much power Gundy has and how tied Holder’s hands are when it comes to making demands from his top coach. There’s $21.2 million left on Gundy’s contract and would be owed 75 percent of that.

Termination by Oklahoma State: OSU will pay Gundy 75 percent of the money in the remainder of the contract, to be paid out over the course of the contract. [Tulsa World]