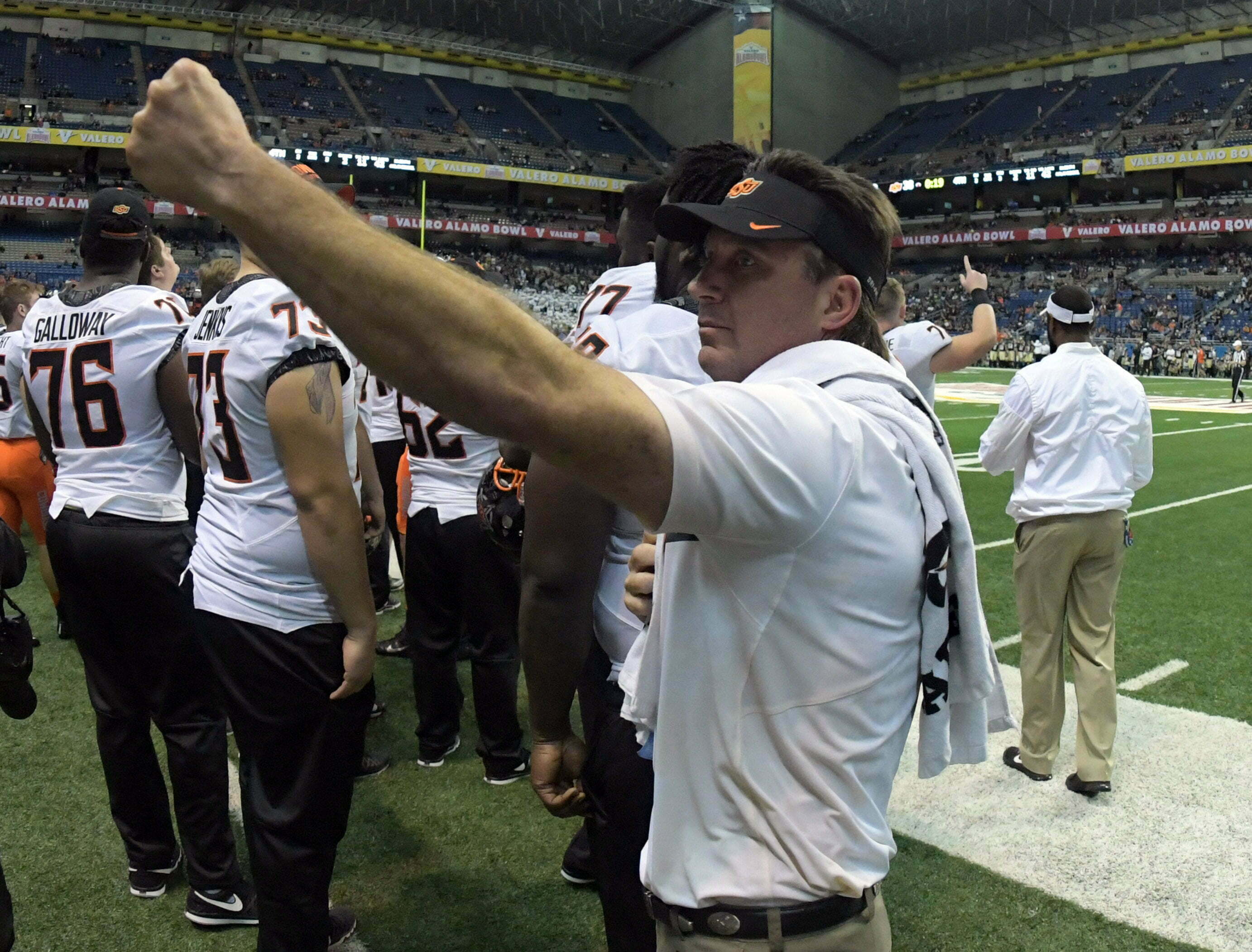 On Tuesday, Oklahoma State fans got good news. Mike Gundy (finally) signed a new contract that ties him to OSU for the next five years (and likely beyond). Gundy inked a deal for at least $22.25 million over the next five years with an automatic annual renewal that makes it read like a lifetime contract for Gundy (we’ll get to that in a minute) and a built-in $125,000 annual raise.

This is terrific, obviously, but it also begs a lot of questions. Here are my five thoughts on Gundy’s new deal and what it means for the future of Oklahoma State.

Gundy already has more money than he can ever spend on hair product or tractors. He desires security and power. That’s the triumvirate of success in our economy, and Gundy has largely only had a third of it (the dollars) throughout his career. Now he has the security part locked up, and as the landscape shifts in Stillwater, he will likely acquire more power as well (see final point).

That’s the good news for him.

The reason this might not be a great deal for Gundy is that he’s locked into relatively small salary bumps over the course of the contract. Like I just noted, I don’t really think he cares about that, but by the time this thing is over, Gundy could be the 55th or 63rd highest paid coach in the country instead of in the top 20 like he is right now. Heck, he’s starting out as the third (or maybe fourth) highest paid in the Big 12. What’s that going to look like in five years as more and more money is poured into the CFB world?

Consider the following: Six years ago Nick Saban’s salary was $4.8 million. Bob Stoops’ was $4.1 million. In 2016 those two made $6.9 million and $5.6 million respectively. The point is that salaries change a lot in six years. Those are ~40 percent bumps in six years for those two guys. Gundy’s contract will only pay him 15 percent more in its sixth year of existence.

The other part of that equation is that this is not a contract you tear up. This is a lifetime contract (literally), and I don’t think Gundy will ever sign another one as long as he’s at Oklahoma State.

Oklahoma State’s leverage here is that it can argue that Gundy would not have the type of success in Fayetteville or Knoxville as he has in Stillwater. So it has a top 10 (?) 15 (?) coach locked in at top 20 money with minimal increases into the indefinite future. That’s excellent. What’s not so excellent is that this brings to mind Travis Ford and his 900-lb. albatross of a deal.

Here is the exact language on okstate.com:

The new deal is for five years and provides for annual automatic rollovers. [okstate]

So it just … renews every January 1? I presume there are qualifiers (see below), but it sure reads up front like Gundy can be in Stillwater as long as he wants. Which leads us to …

The full contract will be released at the beginning of next week, and it’s going to be incredibly interesting. What are Oklahoma State’s outs? What language is in there that will allow the university to free itself from Gundy if he slaps together back-to-back 2-10 seasons? Will he have qualifying plateaus he has to reach to get the contract renewed? Will the contract say “if Mike Gundy does not reach a bowl game his contract will not be renewed”?

I realize Mike Gundy and Travis Ford are about as similar as coaches as me and Rickie Fowler are as golfers, but the secret subplot in the midst of this good news is that you do not want to be tied to any coach on that coach’s terms for as long as he wants. Any coach. Not Nick Saban. Not Urban Meyer. Not the ghost of Knute Rockne. I’m confident the language will play in OSU’s favor — Person Who Knows Things insinuated as much to me — but I’m going to be parsing that document like it’s the Rosetta Stone.

Mark Cooper of the Tulsa World reported that OSU has basically said the decision will be on the university to renew the five-year deal every year until … well … it doesn’t feel like doing so anymore.

What that means: Gundy’s contract will roll over — have an additional year added to it — every year unless the university provides notice that it won’t happen. [Tulsa World]

In this sense, it’s better than the Ford deal because you’re never locked in for more than five years, and you apparently don’t have to renew. But did Gundy really give OSU unilateral authority to not renew him because they don’t feel like it? Again, the language in the actual contract will be fascinating.

As John Hoover of The Franchise pointed out to me on Wednesday, this actually happened this week at Arizona State with Todd Graham. He was to receive one-year extensions so that he always had a five-year deal just like Gundy, but it was not re-upped in 2017 so now he has a four year deal.

ASU Vice President for Athletics Ray Anderson said a contract extension for Graham is not mandatory although his contract reads: “If grounds do not exist for termination for cause, ASU will ask the board to extend coach’s contract for one additional year following completion of the 2016 football season.” Anderson said, “That’s not an automatic provision in the contract. It wasn’t rolled over because it didn’t need to be rolled over.” [Arizona Republic]

The other part of this is that gets a little awkward when you don’t renew like with ASU and Graham. We know you have four years left on your deal, but the writing is on the wall. Good luck! Also, I hope Gundy’s says: “If he cuts his hair or wins fewer than eight games in any season, we reserve the right to not renew.”

Let’s say Gundy stays for 10 more years (from an outsider looking in, this seems optimistic). This would be his total haul in that decade.

That’s pretty good for both sides. And all Gundy has to do to earn it is to get his contract renewed in each of the first five years. All of a sudden that five-year is a 10-year deal and you’ve been paid 1/20th of a billion dollars. The other part of his contract that will be intriguing is the buyout which was previously set at $3 million.

5. What it means for the future

I went on with Mark Rodgers and Dusty Dvoracek on the Sports Animal on Wednesday, and they posited something I hadn’t thought that much about yet: That this could be a signal of the end of Mike Holder’s tenure in Stillwater. It could be the final tick mark on his to-do list before he retires to a life of tending to Karsten Creek and doing whatever people like Mike Holder do when they retire.

I think that’s plausible, and I think it probably means that we’re closer to the Weiberg Era than maybe we thought. It also shifts a bit of the power from Holder and others to Gundy and his staff (which also got raises in the new deal). Not that Weiberg won’t be in charge as AD, but it’s easier for Holder (who came in with Gundy and is much older) to assert his will than for the new, younger guy entering when Gundy is already into his second decade as the most important figure in Stillwater.

Lastly, and I touched on this earlier, I think this is the beginning of the end for Gundy as well. I set the over/under for Carson last week at 6.5 more years that Gundy coaches. He’ll be 50 in August, and he’s not a lifer. I think he takes his shot at a couple more Big 12 titles, maybe makes a run at one more national championship (possibly this year) and rides a horse off into the sunset. This is a contract that has “that’s the last one, I’m richer than the owners of Bass Pro and Cabela’s combined!” written all over it, and I think it will be.