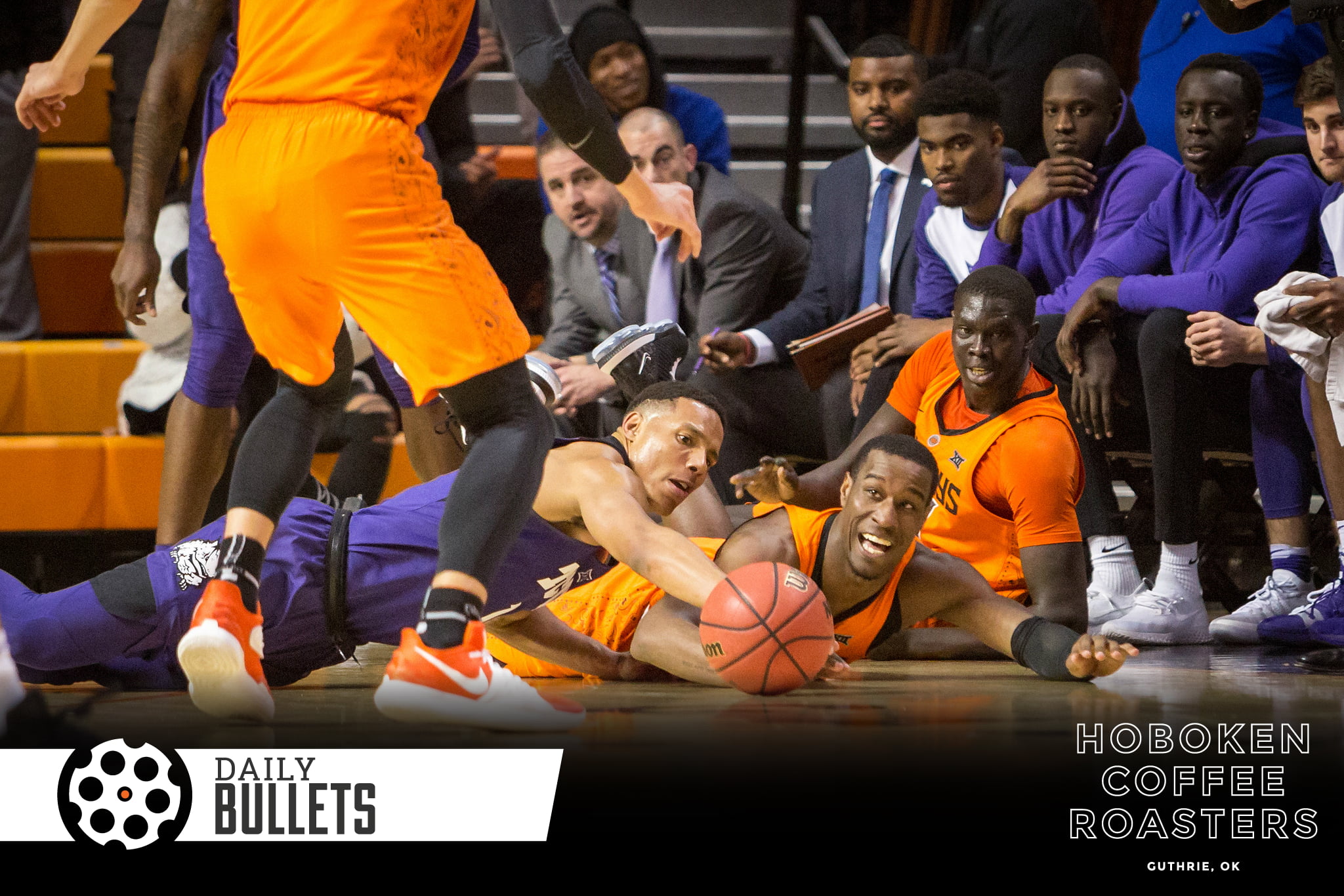 After listening to this week’s pod with our wrestling writer Seth, it’s hard not to be excited (and informed) about Sunday’s wrestling match against Iowa.

• I could really go for a Gundy press conference or a handful of articles to drop about Gundy’s off-season decisions and winter conditioning progress.

The Oklahoma State fans want to hear from their football coach about their football team. On top of that the athletic department is in the middle of football season ticket renewals and my guess is a dose of Mike Gundy will be good for more than a few renewals and probably some upgrades. [GoPokes]

I get that Gundy doesn’t want to answer questions about the rash of program transfers (or recruiting for that matter), always going for the free publicity that doesn’t involve answering undesirable questions (see Mike Gundy Twitter account).

But there’s no reason he couldn’t invite in a few reporters and answer questions about these new coaches and drop some Spencer Sanders’ insights.

• These comments on Cam McGriff’s impact on Monday night’s win tell me McGriff has a little Marcus Smart-intangibles to him.

McGriff was Oklahoma State’s leader in plus-minus in the Cowboys’ 68-61 victory over TCU on Monday despite missing all seven of his shot attempts. Coach Mike Boynton joked that McGriff’s night even included missing “probably the best play I’ve drawn up all year,” an alley-oop to open the second half, but the junior forward made the plays he needed to late.

Diving to the floor for a second-half steal. Rebounding his own 3-point miss and throwing it off a TCU defender to set up a crucial Lindy Waters jumper. Winning plays that showed maturity on a night his offense wasn’t there. [NewsOK]

The setup of this team calls for somebody to put up points and that’s falling to  Cam McGriff or Lindy Waters to do their best impersonation of a ball-dominant scorer. In reality, these guys are best at doing the things like what McGriff did on Monday – making winning plays like those mentioned above.

Chief among the tasks of the incoming recruiting class will be establishing a go-to-guy who can score regularly and with efficiency. There should be plenty of Robins to his Batman.

Loved this play by Smart last night that gave the Celtics at a shot to win it. He tied up an MVP candidate with the game on the line!

• The Pokes had a graduate-transfer visitor on campus recently that could provide a boost to the offense this fall.

The former Arkansas Razorback would essentially be slotting into some of Tyron Johnson’s void, a hedge against some of these young or inexperienced guys not developing (CJ Moore, Braydon Johnson, L.C. Greenwood, etc.)

• Here’s a way-too-early bowl prediction for Cowboy Football in 2019.

That would put OSU fourth in the Big 12 pecking order (with OU to the playoff bumping everybody up a spot), which seems like a relatively successful season.

• Inside the world of college football recruiting graphics

• I didn’t realize how competitive Malcolm Rodriguez is a run-defender.

In today's game, playing safety is about holding up against the run and the pass. In the Big 12, no one was better against the run than Braxton Lewis from Iowa State. pic.twitter.com/bbE9PSPDFs

• One of life’s more difficult questions.

Me trying to decide between Eskimo Joes and Thai Cafe this weekend in Stilly https://t.co/2PYF1U9L6a

• Solid thoughts on what comes first: work or passion

“How Hong Kong Changed Countries” – after visiting Vancouver last year, it made perfect sense that I was a minority as a Caucasian .