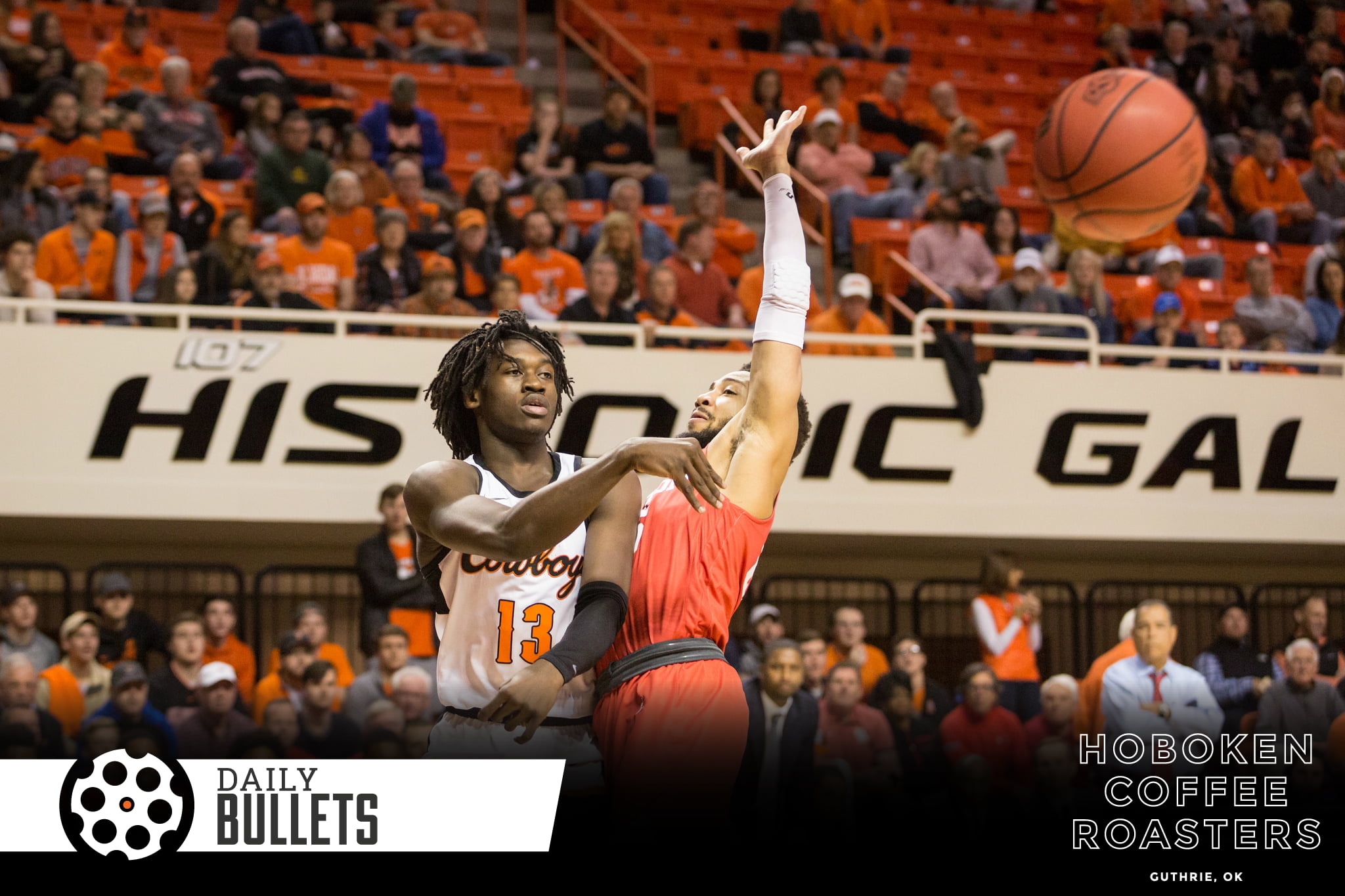 The Pokes fought back to .500 in the Big 12, got to see the Thunder avenge a double-OT loss to San Antonio, and now we’ve got an Office-themed Monday night game in Stillwater against a struggling Big 12-foe. Here’s to a fine winter day.

Do we have any fans of The Office? Perfect, you're going to love Monday night. #c2e #okstate pic.twitter.com/oHe707lgyb

• With the recruitment of stud running back Deondrick Glass mercifully coming to an end today, something that has to play in the Cowboys favor (other than loads of experts predicting) was his official visit.

Glass has already made his official visit to Stillwater back on Oct. 26 when Oklahoma State upset then ranked No. 6 Texas. Glass was there with his dad in the locker room following the upset of Texas and both were very impressed with how things went and his time in Stillwater with his lead recruiter John Wozniak and Oklahoma State players that weekend. [GoPokes]

For a guy from southeast Texas, it’s tough to top a homecoming beatdown of the state’s flagship program.

Deondrick Glass is making his commitment TOMORROW. Scroll to the 3:30 mark here to hear what @DustRagu and I said about his situation and where we expect him to land. ??https://t.co/Gw1u4pr82I

OSU continuing its momentum starts Monday with its game against Baylor. Before the season started, the Bears were picked to be the second-worst team in the Big 12. The Bears have since pulled off an impressive victory against Iowa State and put up a good fight against Kansas, but Baylor is one of three Big 12 teams who have yet to reach 10 wins this season — and the Bears lost an important player for the season this week, too — so at home, this is a game the Cowboys ought to win. [PFB]

Good news – Baylor is without their best player for the season (think 2014-2015 team without LeBryan Nash), bad news – they lost to Kansas by five yesterday without him.

• After Saturday’s coming out party, one storyline tonight will be around the sustained success of point guard play and Isaac Likele.

After a prolonged timeout, the sophomore guard (Michael Weathers) had to be helped to the locker room with what was reported as a right ankle sprain. He didn’t return.

At the time, it was troublesome for an OSU team lacking depth at point guard.

Freshman Isaac Likekele assuaged those concerns with the best performance of his 16-game career.

The 6-foot-4 guard was terrific, dropping 23 points on 7-of-10 shooting, securing nine rebounds and playing 35 minutes of turnover-free basketball. [TulsaWorld]

• In Gundy’s recent contract-extension announcement, there was plenty of language around excitement and enthusiasm. Looking at recent history, what’s the implication with this marketing bit?

Bill Haisten tackled the topic in a recent column. He recalled Gundy’s first bout with burnout occurred in 2014. He discovered a quote Gundy used in the spring of 2015 to signal a comeback: “I’m just as energized now as when I started. I hit a wall and I kind of fell off, but I’ve broken through now.”

I assume Gundy’s use of “energized,” not to mention “excited” and “chomping at the bit,” is his signal four years later. [TulsaWorld]

This goes back to the “monster” that is expectations around OSU Football. Winning seven games at Iowa State was a massive win over the last two decades, a nightmare season in Norman. Seven has gone from decent to dismal in the eyes of the fans.

• How Kyler Murray has been able to play off his NFL draft-prospects against the star-crazed MLB is amazing.

I am told that $15 million figure being cited as Murray's request to A's is inaccurate (the figure is too high, source says), but the A's and Murray's representatives are working on trying something creative to accommodate him, thus today's meeting. MLB would have to OK.

• This on the “affective presence” of a person was pretty interesting.

It seems that “our own way of being has an emotional signature,” says Elfenbein, a business professor at Washington University in St. Louis.

• Finished this fiction read about dealing with a crisis from the president’s perspective. Co-authored by Bill Clinton so you have to believe there’s some sort of realistic perspective – fun read.