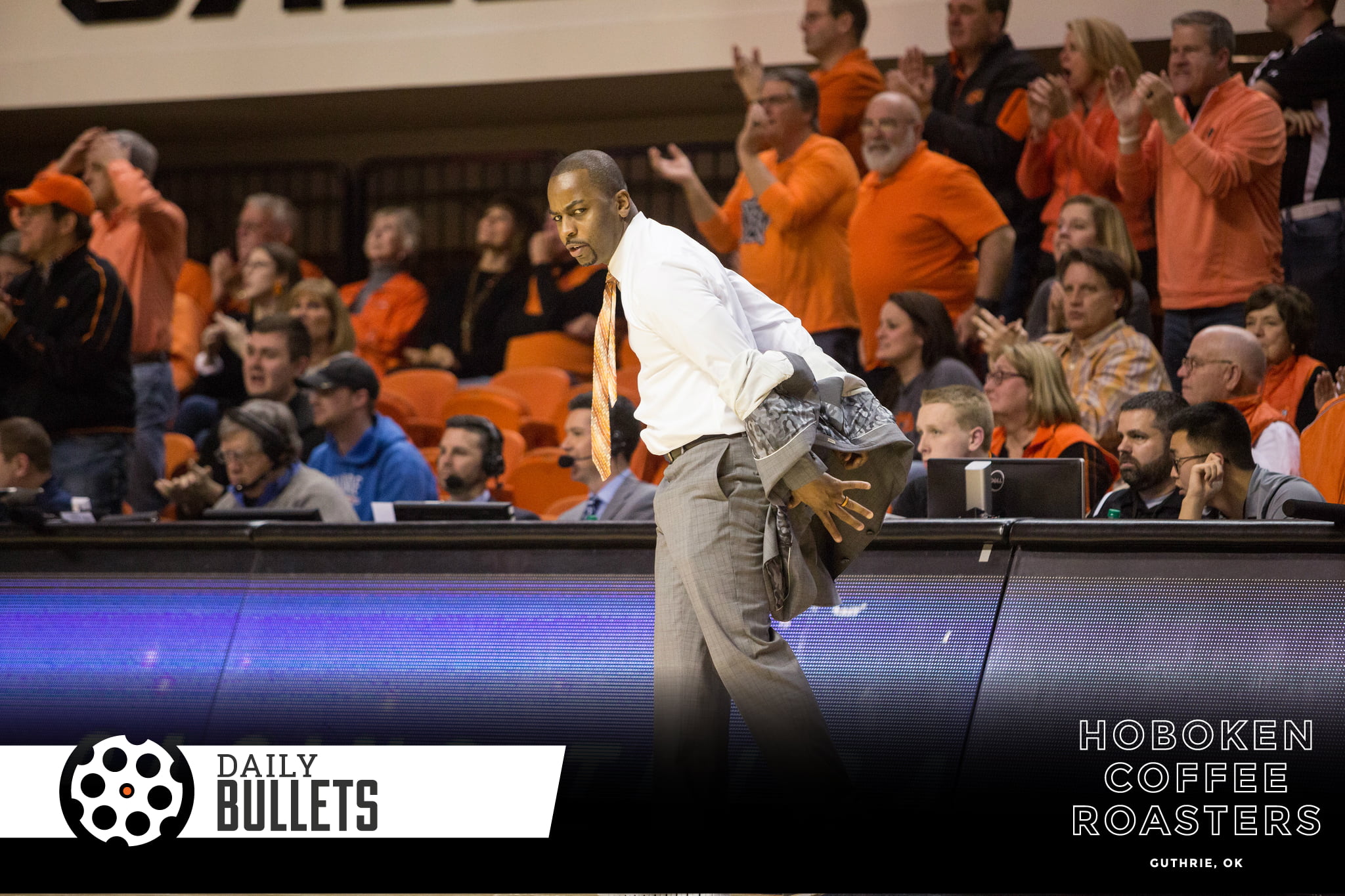 Back at it this morning after a three-day MLK weekend, let’s hit it.

• Mike Boynton offers a solid update on the walk-on tryouts for filling the open spots.

“I think five or six of them were called and asked if there schedule worked and if they could be here for practice.”

It’s definitely not expected a new member will log minutes in Allen Fieldhouse on Feb. 9, but it’s not something that’s completely off the table.

“If there’s a kid who comes through here and I think over a few practices, he can help us, I’m not opposed to it,” Boynton said. “I just don’t see that scenario right now.” [PFB]

So there you have it, five or six guys worth bringing into the fold but don’t expect to see any of them spelling the short-handed Pokes anytime soon.

• These comments by the TulsaWorld columnists being critical of Gundy (and Lincoln Riley’s) general MO on millennials/transferring was interesting. How many times have you heard Cowboy Culture critiqued?

Gundy should revisit his culture, not just because Jalen McCleskey, Thabo Mwaniki, Darrion Daniels and J.D. King decided to leave last year or because Gundy said what he did about millennials.

Rather, because (Dru) Brown tweeted what he did on Jan. 4: “Fans always assume kids are transferring because of football related reasons. Like bruh we are human beings as well just like y’all. And 99.9% of the time we not trying to tell the public the personal reasons behind it.”

And because OSU running back Chuba Hubbard tweeted what he did last week: “It’s funny how coaches can leave to another school in a heartbeat without saying a word to any of the players. But as soon as a player does the same they hate on you for it. They block you from which schools you can go to and all this other stuff.”

Gundy should have conversations with these players, not harbor stereotypes toward them. [TulsaWorld]

Calling it a double standard, which is certainly true with coaches, doesn’t change the public perception: some would say more power to them and some would be frustrated on account of disloyalty.

When Darrion Daniels transferred to Nebraska (the only transfer that concerns me), it stunk. As an OKC Thunder fan, it was miserable when KD left (still is at times). But within the system that is agreed upon, those were acceptable moves. Reality is fans have to swallow the bitter pill and the players have to man up and deal with the criticism for making their decision.

• As Mitchell Solomon is still on campus finishing his engineering degree, my goodness could the Pokes use 30 minutes of Solomon right now.

A Bixby native who grew up an OSU fan, Solomon was one of those players, with his career defined by hard work and intelligence and featuring strong defense and continual dives to the hardwood. The most notable of the latter, beating Oklahoma star Trae Young for a loose ball in last year’s Bedlam home game, is guaranteed to be shown on OSU’s video board Wednesday, when the Cowboys host the Sooners at 8 p.m. [NewsOK]

• Adding four-star receiver Langston Anderson was a big win for the Pokes, continuing to stock the pipeline with elite talent. GoPokes gave Anderson an interesting NFL comp with some pros and cons.

— Short and screen game effectiveness to date is largely attributed to strength and straight-line explosion.

— Needs to add some short-area quickness to get open against high-caliber defensive backs. If he adds consistent dart-and-dodge ability, watch out.

• One of the more refreshing elements of Boynton is his general lack of coach-speak.

"I'm not backing down. I'm not turning my back. I'm digging down deeper. Hunkering down harder." ??? #c2e #okstate pic.twitter.com/kEfun9IDHP

• I don’t even care what other schools put out, this was the uniform ace-in-the-hole OSU has been sitting on.

The fans have voted and the 2018 Throwback Uniform of the Year winner is @CowboyFB #uniswag pic.twitter.com/MH9HoYPhys

• Good short read on the “moral weight of (using your) gifts”

• Finished this WWII read – fantastic book. True story about a couple who met in a concentration camp, great story.

• I liked this faith-based look at the unselfish reasons for reading.