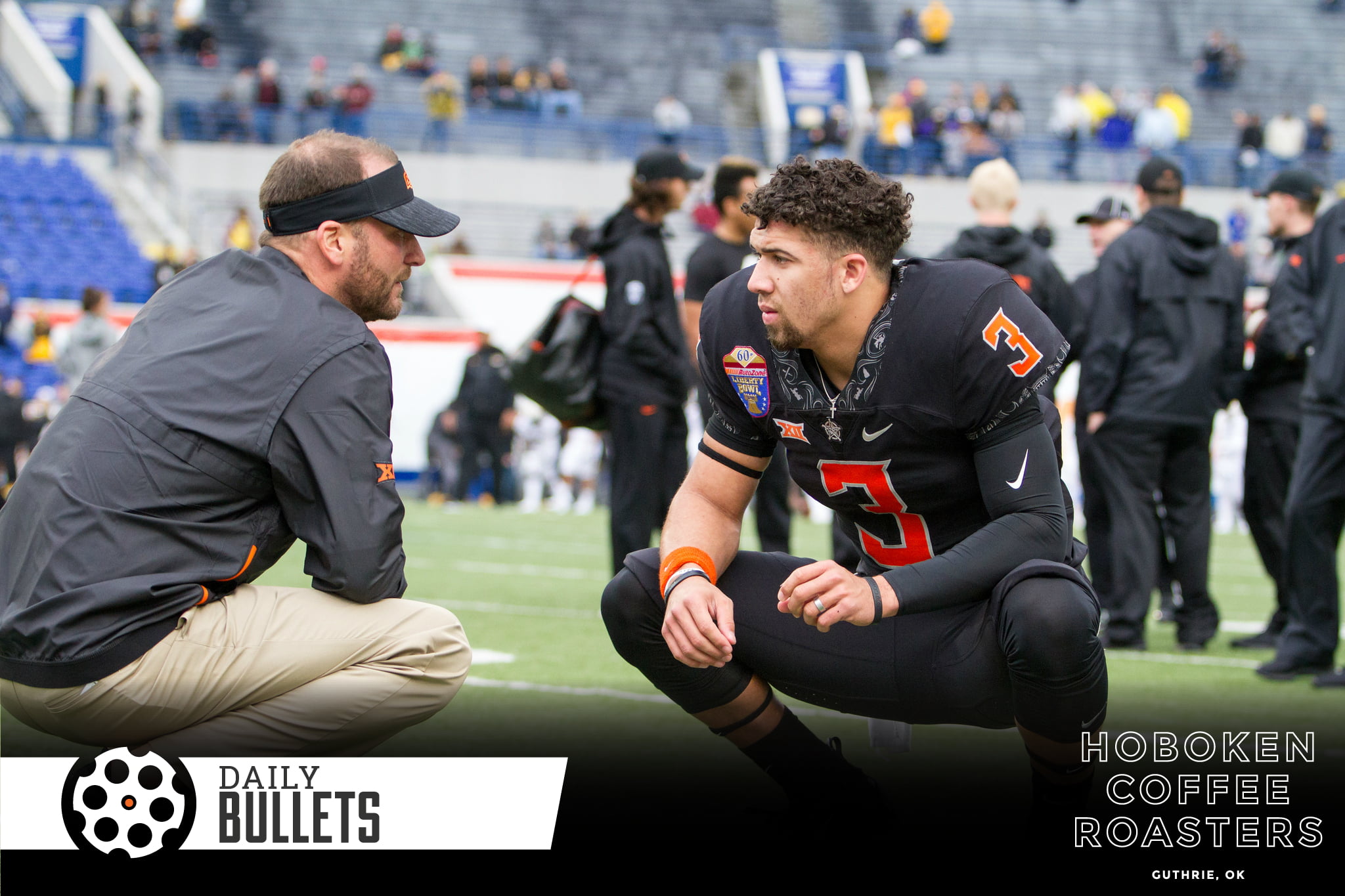 The OC hunt is over – the football program for the Princeton of the Plains is now resplendent with Ivy League coaches.

• Concerning the Sean Gleeson Hiring, this by Boone on his flexibility to adapt to strengths (and succeed) seems like a fantastic quality.

Gleeson’s 2017 offense was led by quarterback Chad Kanoff, a 6-foot-4 gunslinger who was primarily a pro-style prospect. He threw 388 passes and completed 284 in his lone season with Gleeson calling plays, a 73.2 percent completion percentage, and tossed 29 touchdowns to 9 interceptions.

A year later, Gleeson completely remade the offense with a different player. Though Kanoff only ran 28 times the year before, his successor, John Lovett, ran a team-high 141 times for 972 yards rushing in 2018. Lovett was a good passer, too, completing 66.1 percent of his attempts for 18 touchdowns and 3 interceptions, but his strength was running — and Gleeson made that strength shine through. [PFB]

While Graham Harrell (whom conversations were rumored to be happening with on Sunday) is one of the more ripe fruits on the Air Raid tree with Texas-ties to boot, the price was likely right with Gleeson and you could have his talents for longer and at a better rate.

Plus – he must be a quality guy for his old employer to tweet out this kind of stuff when he leaves.

Thank you @CoachGleesonPU! We wish you the best of luck at Oklahoma State! pic.twitter.com/g1kt5VvYyR

• Something else that has me feeling (relatively) confident about the Gleeson hire is seeing his (brief) track record with quarterbacks.

Chad Kanoff and John Lovett, two elite Princeton quarterbacks in 2017 and 2018, have put together some stellar passing tape for Sean Gleeson. From watching Princeton film I’ve seen some Air Raid concepts in their passing game. Princeton likes the shallow crossing routes as well as stick routes. Of course play-action passing will be a huge part of their game as they love to run the football as much as sling it around. [State of the U]

The piece had loads of good insights on his Princeton offense (love the two tight end stuff to create gaps) but putting an Ivy Leaguer into the pros and swinging a four-star QB over Bama and Tennessee is alright in my book.

• In 2018, it seemed like Boise State would be the defining game for the season’s trajectory. While that was a bit of fool’s gold, what game in 2019 will tell us where the season is headed?

OKLAHOMA STATE COWBOYS: SEPTEMBER 28TH VS. KANSAS STATE
This might seem like an odd choice, but my thinking goes as follows: Oklahoma State plays Oregon State, Tulsa and McNeese State, then they open Big 12 play at Texas. The Cowboys should be 3-0 before the Texas game, and while they beat the Longhorns last year, it’s likely UT is a heavy favorite in this game at home. So if OSU wants to have a bounce back season and not end up with a mediocre year for a second straight season, then this game against Kansas State will be telling. [HCS]

Without too much thought, I’m not anticipating Spencer Sanders to waltz out of Austin with a win in his Big 12 opener and I do agree this K-State game will give a better read. K-State without Billy S. will be fascinating.

• Another big-game target Mike Boynton’s after is 2020 guard Bryce Thompson who appears to be on an incredible high trajectory.

In a video that was tweeted in November, Young endorsed Thompson as a rising-star figure.

“I feel like we don’t get the credit we should in the state of Oklahoma,” Young said. “Good players came out (of Oklahoma). Blake (Griffin), obviously. … Me, trying to come up and do things. Bryce is up next.” [TulsaWorld]

I love the close exposure and friendship with the Boone twins – can only help OSU. Thompson would be a fantastic replacement for a graduating Curtis Jones at the two.

The ‘Pokes don’t have a ton going for them on defense but these two guys at least have played a lot of football and have some decent size. Jim Knowles’ best bet for next season is going to be more in going pseudo-dime and flooding the field with extra safeties of reasonable quality than relying on key matchup weapons. They have Kolby Peel (6-0, 210, sophomore), Jarrick Bernard (6-2, 195, sophomore), and Malcolm Rodriguez (6-0, 205, junior) back who all played a lot of football last year at varying levels of competency. [Concerning Sports]

OSU generally does a good job of layering units – generally having a more experienced portion of at least one part of the position group (defensive tackles and ends, tackles vs guards/centers, safeties/corners). For the first time since Ashton Lampkin and Kevin Peterson, the corners have flipped back into the vet role.

If you’re interested in X’s-and-O’s, this related piece on defending matchups was good.

• This comeback on Saturday was insane.

ODU: 99.9% chance to win@UTSAMBB: So you’re telling me there’s a chance pic.twitter.com/Nqbe53xDqu

• The deviation in the trajectory of iPhones/smartphones from Steve Jobs initial vision is pretty wild.

Mr. Jobs seemed to understand the iPhone as something that would help us with a small number of activities — listening to music, placing calls, generating directions. He didn’t seek to radically change the rhythm of users’ daily lives. He simply wanted to take experiences we already found important and make them better.

The minimalist vision for the iPhone he offered in 2007 is unrecognizable today — and that’s a shame. [NewYork Times]

• An insightful look at body language