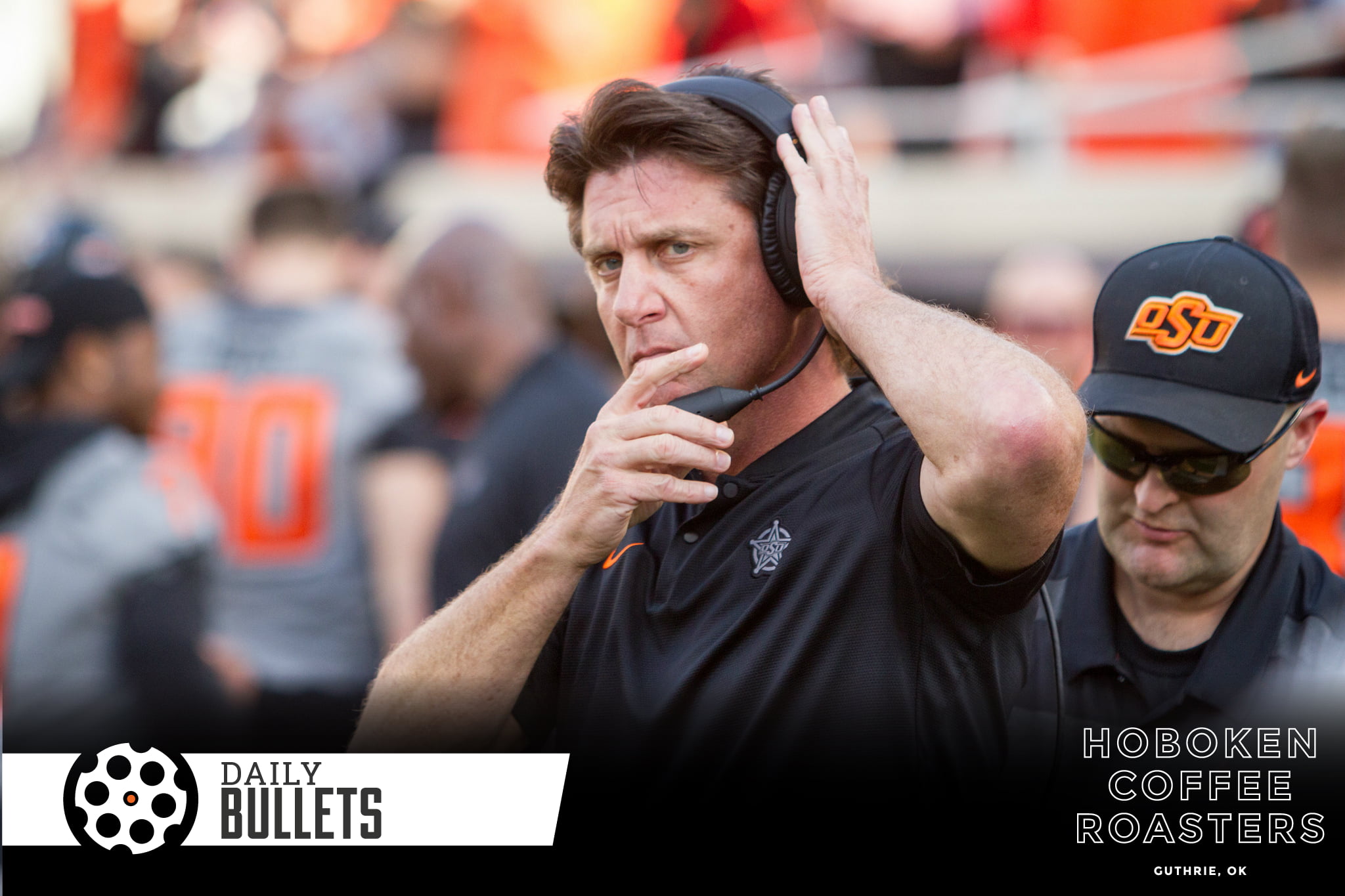 The media race to interview anybody with insight on Sean Gleeson is on – PFB came in hot interviewing SB Nation’s Bill Connelly, a CFB aficionado with loads of insight.

• More credit to the system or the OC?
• Gundy: the angel investor to lower-level coordinators
• Gleeson’s translatable skill

• Mike Yurcich is getting plenty of hype in Ohio.

Yurcich’s career so far has been defined by taking an under-the-radar quarterback and turning him into a high-caliber player. He is responsible for four of Oklahoma State’s 10 best offensive seasons in school history. Over a six-year span, the Cowboys averaged 38 points and 478.3 yards per game. They scored at least 40 points 35 times, 50 points 15 times and 60 points three times.

In 2018, he took Taylor Cornelius — who arrived in Stillwater, Okla., as a walk-on — and turned him into one of the top 10 quarterbacks in the country statistically. Cornelius finished the 2018 season with 3,978 passing yards and 32 touchdowns. [Cleveland.com]

Something that fascinates me about OSU offensive coordinators is how they’re perceived much highly after time in Stillwater. When a Texas Tech quarterback (that’s not Patrick Mahomes) leaves Tech, he’s not an automatic first round draft pick because he threw for 4k.  Interesting that right or wrong, Gundy’s OCs aren’t labeled “system guys”.

I don’t know who to assign the credit to. Gundy/Holgorsen’s system has clearly proven it’s value but every OC to come through has gone on to find success elsewhere (I’ll hear Fedora arguments).

• Something unique about these extreme career makeovers that Gundy has overtaken (Yurcich, Gleeson) is that a guy jumps about ten rungs in the career ladder of college football coaching.

”To this day we’re extremely close,” (Gleeson’s boss at his first coaching job at a New Jersey high school) said, “and when you see a young guy, I guess dedicate his life to coaching … We all know that there’s risk involved when you do that, especially at the collegiate level and for it to work out for a guy like him, everyone in our community is ecstatic. It’s a great thing for him.” [TulsaWorld]

How many lower level coaches are dreaming of getting a call from the Mike Gundy’s of the world to go ahead and take a 10x bump in salary to call plays in the Power Five?

• Apparent in the “three quarterbacks in one play” ideas at Princeton is this quality: Sean Gleeson is creative.

“It seems like it was mostly red zone,” said Bill Connelly on our podcast on Tuesday. “Which makes perfect sense. You’re just trying to wrong-foot a defense for a half second, and that’s really maybe all it takes to get into the end zone.

“That’s really the one thing anybody knew about Princeton in 2013 was they ran these plays with three quarterbacks! It wasn’t like that with their offense. It was a wrinkle and something they were willing to do.” [PFB]

Given Gundy’s conservative-tendencies, it doesn’t seem prudent or rational to assume concepts like this will be copy + pasted into the OSU playbook. But the mindset of looking at a problem from all different angles – that perspective is something Gundy should gladly welcome.

• The Lamont Evans legal troubles appear to be drawing a conclusion.

• Four guys top-50 at their positions is just unreal to me. If you’ve gotta hitch your wagon to a group of players (and your not Kentucky, Duke, or Kansas) this is the kind of outfit you’d take a long hard look at.

• Mikey Stoops is headed southeast to work off-field for Alabama and Baylor’s old AD think Art Briles will be coaching college football in 2020.

• Good piece talking through the tension between analog and digital

• This on screen-free zones seems like a good idea

• I’m super curious as to what happens with Anthony Davis before the NBA’s trade deadline next Thursday.