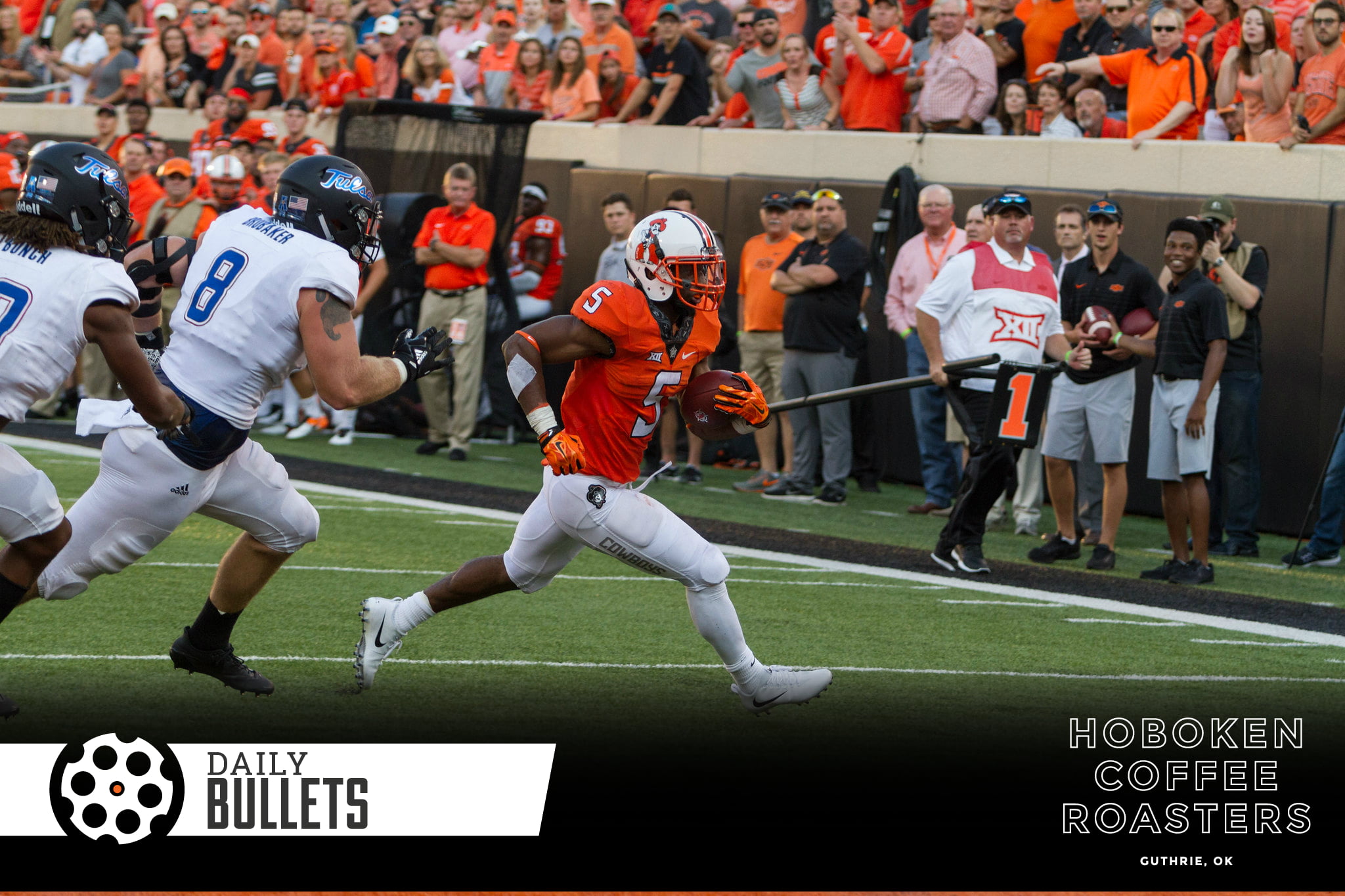 Happy 4th of July – the day that’s finally starting to be more about celebrating the incredible opportunity it is to live in the U.S. again than moping about Kevin Durant leaving.

• We’re finally starting to see some reporting out on what the athletic impact will be from the OSU branding news earlier in the week.

The move is designed to emphasize the use of the “brand OSU” as the school’s primary mark as a university-wide initiative, with Pistol Pete remaining as an integral part of OSU’s public image.

However, the baseball team’s well-recognized interlocking “OS” will remain on their hats. Same for golf’s Swinging Pete logo, and the wrestling team’s chevron design on uniforms and warmup tops, according to OSU officials.

Other images will be phased out of use by the university. For instance, the sheriff’s badge logo will gradually disappear as part of the change. [NewsOK]

There you have it – R.I.P. the badge. My only request is that they keep it around for the bowl game captains.

Many Division I colleges have checked in, and nearly all have scoffed at handing out a scholarship to a player playing such a key position who is expected to stay home.

“I can see where they’re coming from,” Gunnar said. “I just try to push more and more that I am looking forward to seeing other schools, not just OSU. I’ve been here my whole life, so if I can have the chance to go see other places I would look forward to that.”

Gunnar does remain open to playing for his father.

The two have discussed it. Mike won’t offer a scholarship. Gunnar will need to be a walk-on, and he’ll get the same treatment as every other player. [NewsOK]

So no scholarship will be extended but others are timid about offering a scholarship too. The piece outlines that the Ivies are giving Gundy a long hard look at the middle child, that could be an ideal scenario.

• This is always fun – see what Justice Hill is “rated” on the latest NFL video game, Madden 2020.

Justice Hill was the highest-rated Oklahoma State rookie. The Baltimore Ravens running back was given a 70 overall rating. [NewsOK]

• Sad news in CFB yesterday – the big quarterback who played for Kentucky University from the late 90’s, early 2000’s passed away at age 38.

Rest in Peace to a college legend.

Jared Lorenzen was a baller. pic.twitter.com/iHpnv2B9ER

• This was a fun question – the answer has to be a Jimmy Johnson or Les Miles era defender. Years from now, it’ll likely be a Mike Gundy era offensive player.

Testing a theory: If your alma mater/team you root for could add one player from its history onto this year's college football team, who would it be?

• This is interesting – when too many choices are paralyzing

• The steps (and rewards) of deep work

• The Indiana Pacers offseason has been fascinating

The youth movement in the NBA is wild and completely visible in this graphic. It was so crazy when the Kobe Bryant/Kevin Garnett/Kwame Brown picks came in but then it became the norm.