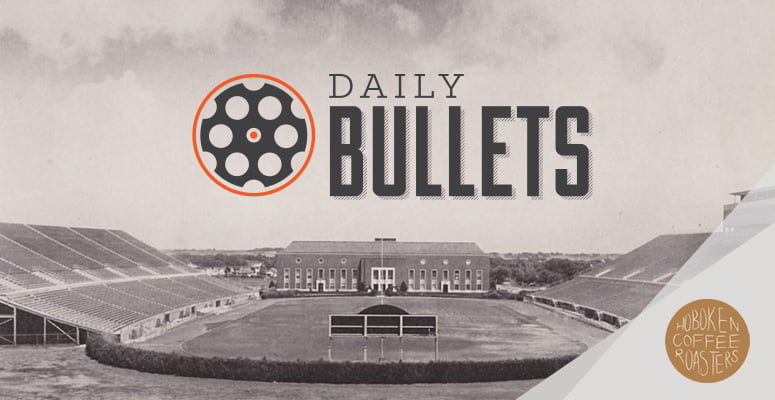 Thanks again to Michael Lane for the slick new Bullets logo. If you need a guy, he’s your guy.

Berry Tramel on how Fox can take on ESPN when it comes to college football: start games earlier on Saturday mornings. (NewsOK)

What in the world is going on in Norman? (Yahoo)

Jhajuan Seales did a back flip off an electrical unit over the weekend. I’m sure that pleases Mike Gundy to no end. (PFB)

On Dez: “It’s hard for these guys to be away — him more than anybody, because he’s such a competitor. If there’s anybody who wants to be out here, it’s him.” (ESPN)

Not stunning, but OSU renewed its contract with Learfield Sports. (okstate)

“Obviously I haven’t coached in a game so everybody’s really nice.”

Josh Holliday on Michael Freeman: “Whoever gets him is going to get a steal, no matter where they take him. You can’t take this kid high enough to put a value on what he’s done.” (Tulsa World)

Good story on Courtney Dike who is making her debut at the World Cup for Nigeria today. (NewsOK)

Legit chills when American Pharoah galloped home at the Belmont. Watch it here. (For the Win)

A Rickie Fowler fan jumped in a pond to retrieve a ball of his this week. (CBS)

Alex Noren won on the European Tour this week.

The debate channel. How cool of an idea is this? (Godin)

These 100-year-old blackboards found in schools in Oklahoma are pretty outstanding. (Kleon)

The emotions of Pixar. Amazing.