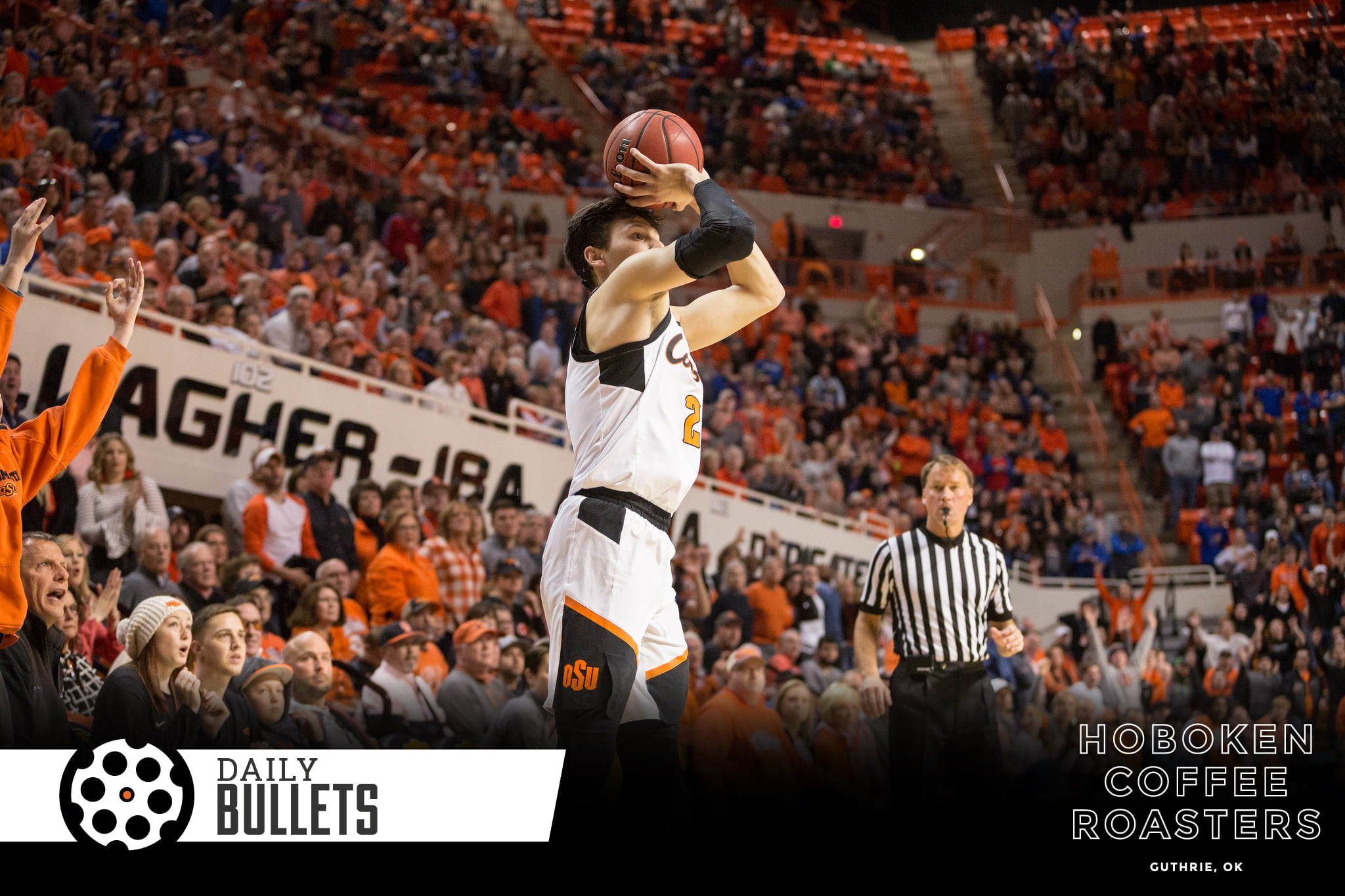 I enjoyed hearing new coordinator Sean Gleeson speak glowingly yesterday on life in Stillwater but it’d be a lot more fun to hear his observations going from New England to rural Midwest over a cold beverage. A big difference from Yurcich’s life in Pennsylvania and Ohio.

• You can make an argument the Pokes are playing their best ball going into Kansas City.

Despite a rough season that featured three player dismissals and an eight-game Big 12 losing streak, the Cowboys enter the tournament believing they are playing their best basketball. After losing to two of the Big 12’s best in Texas Tech and Kansas by a combined nine points last week, OSU has won consecutive games for the first time since the Jan. 16 dismissals of Michael Weathers, Kentrevious Jones and Maurice Calloo left the team with seven scholarship players. [NewsOK]

Consecutive wins for the first time in two months and a four-game streak of close games are positive indicators of a peaking team.

• Mike Boynton is hard after a power forward after chasing Isaiah Todd, Julius Marble, and now Christian Brown prominently. Here’s a great look at what Brown brings to the table.

For the Cowboys next season, I could see Brown assisting Cam McGriff in bringing energy and intensity to the game both on offense and defense. He’s already an excellent 3-and-D piece who has the versatility to defend guards and forwards and be your stretch four at times on offense. The Pokes don’t currently have anyone with his size and skill set on the roster and he would be a huge addition to this OSU squad in 2019. [PFB]

You throw that kind of forward with a couple of All-Conference (ish) wings and a primo shot-blocker, you’ve got the trappings of a winning team.

• The maturity with which Cowboy wrestler Chandler Rogers handled not competing in the postseason was impressive.

During the weekend, as Oklahoma State captured its seventh consecutive Big 12 title at the BOK Center, Rogers wasn’t sulking in Stillwater. He was in Tulsa with teammates.

Before the Sunday night round, Rogers helped to prepare OSU’s Preston Weigel for his championship test at 197 pounds. After finishing with Weigel, Rogers was perspiring as heavily as he was after winning in the Iowa dual two weeks earlier. [TulsaWorld]

Wrestling is interesting – it’s simultaneously an individual and team sport. There’s no element of “if I’m not nice, he may not pass me the ball”. There are ways I’m sure you could make life rough on a teammate but Rogers’ response says a lot about Rogers and the culture of the program.

• Fox is bringing a College GameDay rival to the table – I’d rather see Joel Klatt on that stage over Brady Quinn on Matt Leinart. I feel like they’re trying to be the mid-30’s version of GameDay.

• The boys are back at it. You could talk me into Mike Scott being a solid DE, certainly looks the part.

• TCU now caught up in the college basketball scandals – they went from Kansas Football bad to a tourney team a little too quick with Dixon.

• Considering if we’ve “innovated” some of our greatest minds away from deep thinking isn’t a fun thought but I agree there’s a possible trend towards depth.

Twitter is fun, but most of us would still rather our biggest minds quietly wander the paths surrounding their Black Forest hideaways, hunting transformation over retweets. We can hope that as long as this instinct persists, a correction to our current slide toward shallowness remains inevitable. [Cal Newport]