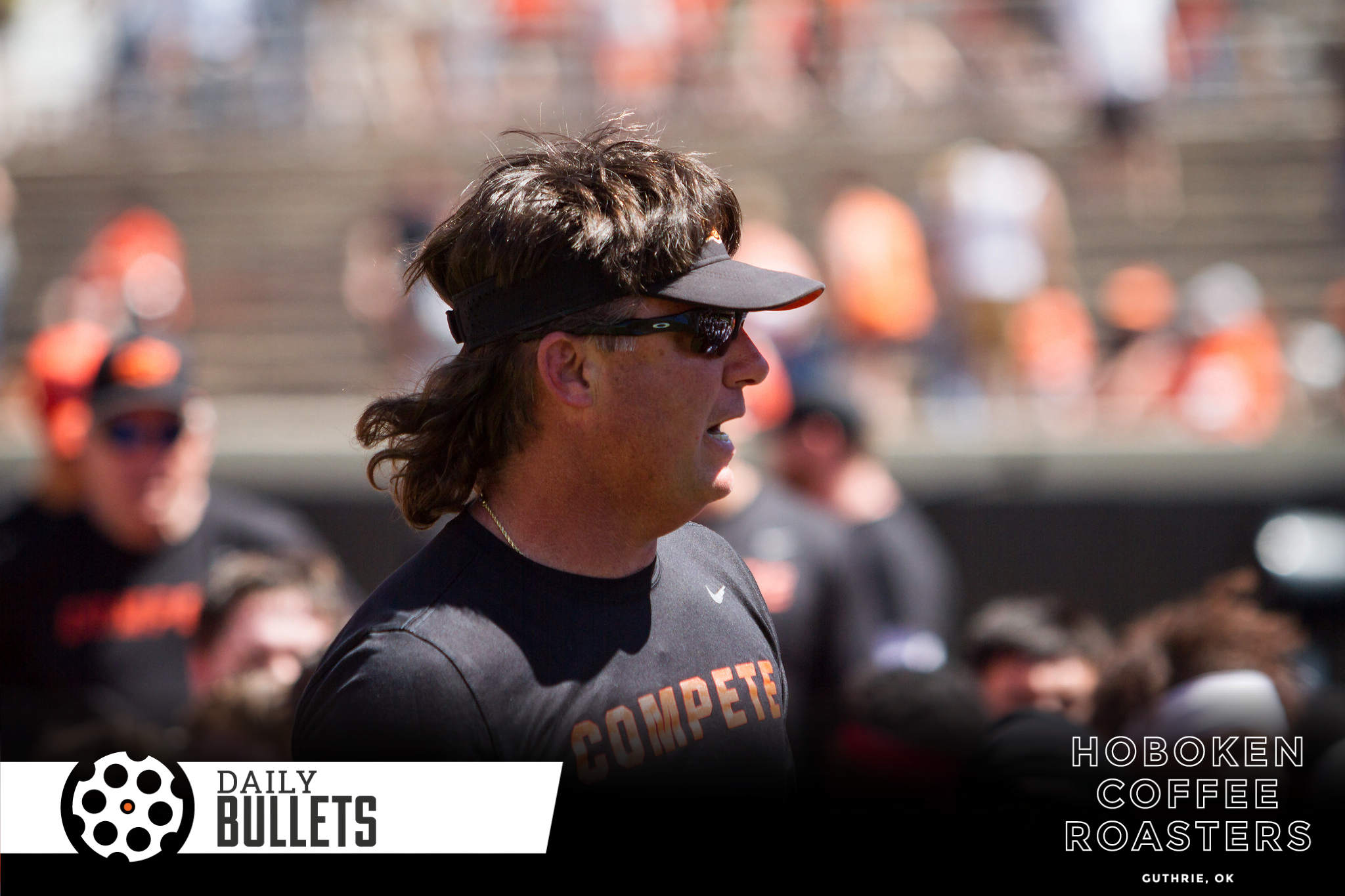 Good morning and happy Mother’s Day. Hope your well-thought out gift to your wife, mom or sister is well received.

• Pokes fell in OKC on Saturday evening for the first time in nearly three years to OU. Is this what football feels like x100?

It took 10 innings for Oklahoma to break a nine-game losing streak to Big Brother.

Also, this is quite the stat.

The #Bedlam series in regular season games all-time at the Bricktown Ballpark is now 20 wins each for the #Sooners and #OkState. https://t.co/g9uPZAx2zU

• This on CFB coaching longevity was really interesting.

There is one FBS head coach still currently going strong at a school that hired him in the same year She’s All That came to a theater near you (the year of our Lord 1999), and his name is Kirk “The Eternal” Ferentz. Powered by animal sacrifices and an unusually adept agent, Ferentz has successfully surfed a wave of semi-consistent competence to a tenure that, as of this fall, will stretch into twenty seasons. TCU’s Gary Patterson is right behind him, followed by the like of Mike Gundy, Pat Fitzgerald, Nick Saban, and also a bunch of guys you’re probably not super familiar with. [11W]

The entire article is less about who’s been where the longest and more about how much less time CFB coaches seem to be staying in general. Maybe 40 years ago Gundy’s run at the same locale doesn’t seem all that exotic. In 2019 though? It feels like forever. Also, here are all the coaches who have tenure dating back to before 2007. 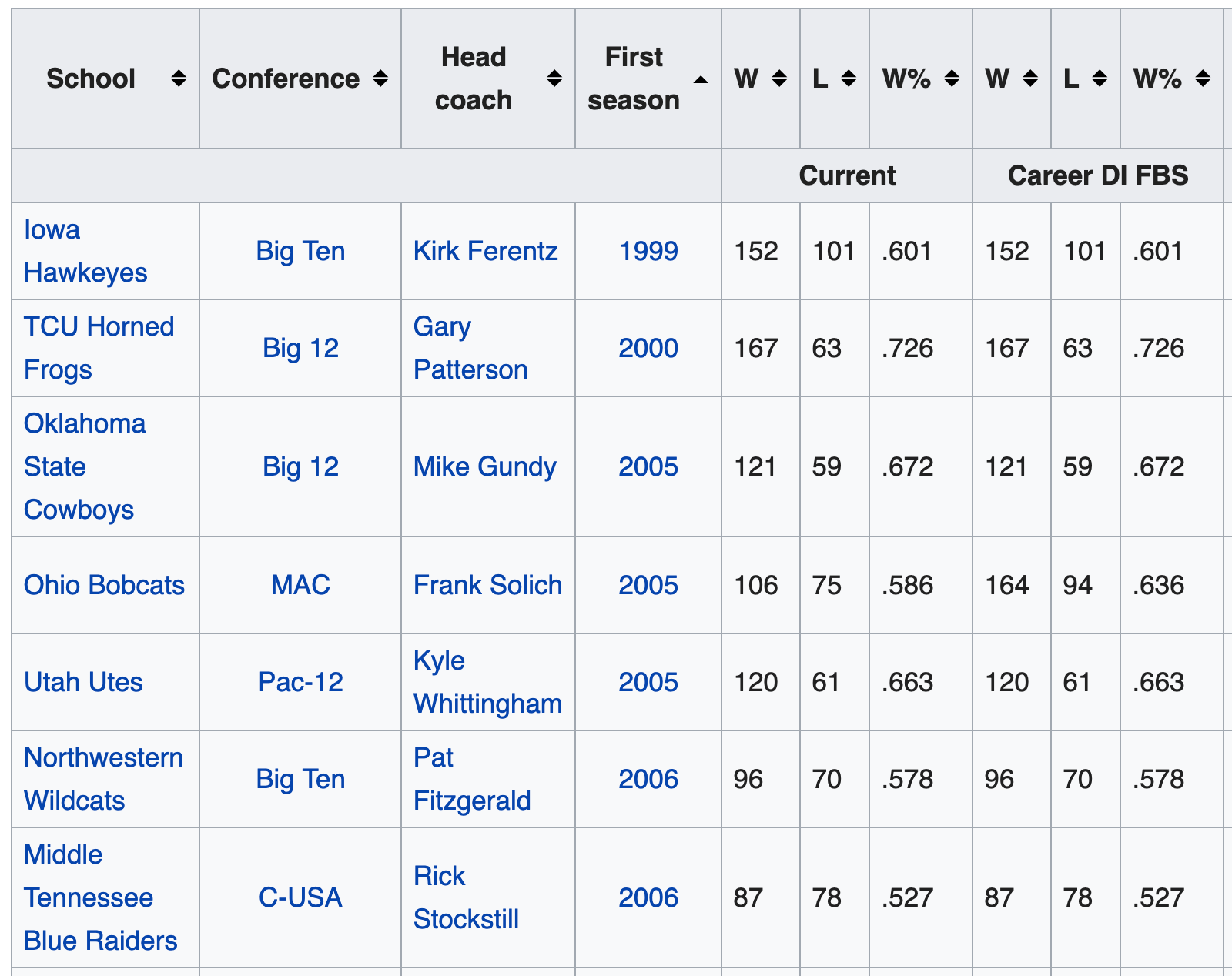 • Guerin Emig wrote about that OSU on OSU crime lsat weekend and how it carried over to Bedlam, at least for the first outing on Friday evening in Tulsa.

They fielded, pitched and hit like they did at Oregon State, and like they have in stretches of their 29-16 season. Two weekends before the trip to Corvallis, OSU outscored Texas 36-12 in another three-game sweep.

That’s the kind of baseball that can keep a team home for an NCAA regional. Right now, the Cowboys’ No. 11 RPI puts them in position to host, and wouldn’t that be a sweet sendoff to Allie P. Reynolds Stadium? [Tulsa World]

I grew up coming to regional games at Allie P. so that would be a true end of an era for me. OSU has one game left against OU on Sunday and then a three-gamer at home next weekend against Baylor in a series that could feasibly be for the Big 12 title. If they win, say, three of those four and perform well in the B12 Tournament, I think they have a real shot at getting one of the regionals.

• So the Big 12 Softball Championship is just … canceled?

• No frontrunner for Bryce … so far.

Bryce Thompson is a big-time recruit. @OSUMBB & @OU_MBBall are recruiting him hard and some of the most storied programs in college hoops are after him too. Hear what @B3thompson__ says about the big names recruiting him. LINK: https://t.co/fBBlhlNqum #okpreps #okstate #sooners pic.twitter.com/lPmiU7JvBW

• On the art of noticing

• What James Harden and the Rockets need

• Why you should start binge reading

• What’s up with all the home runs Christian Yelich is hitting?

• Trapped by the incoming