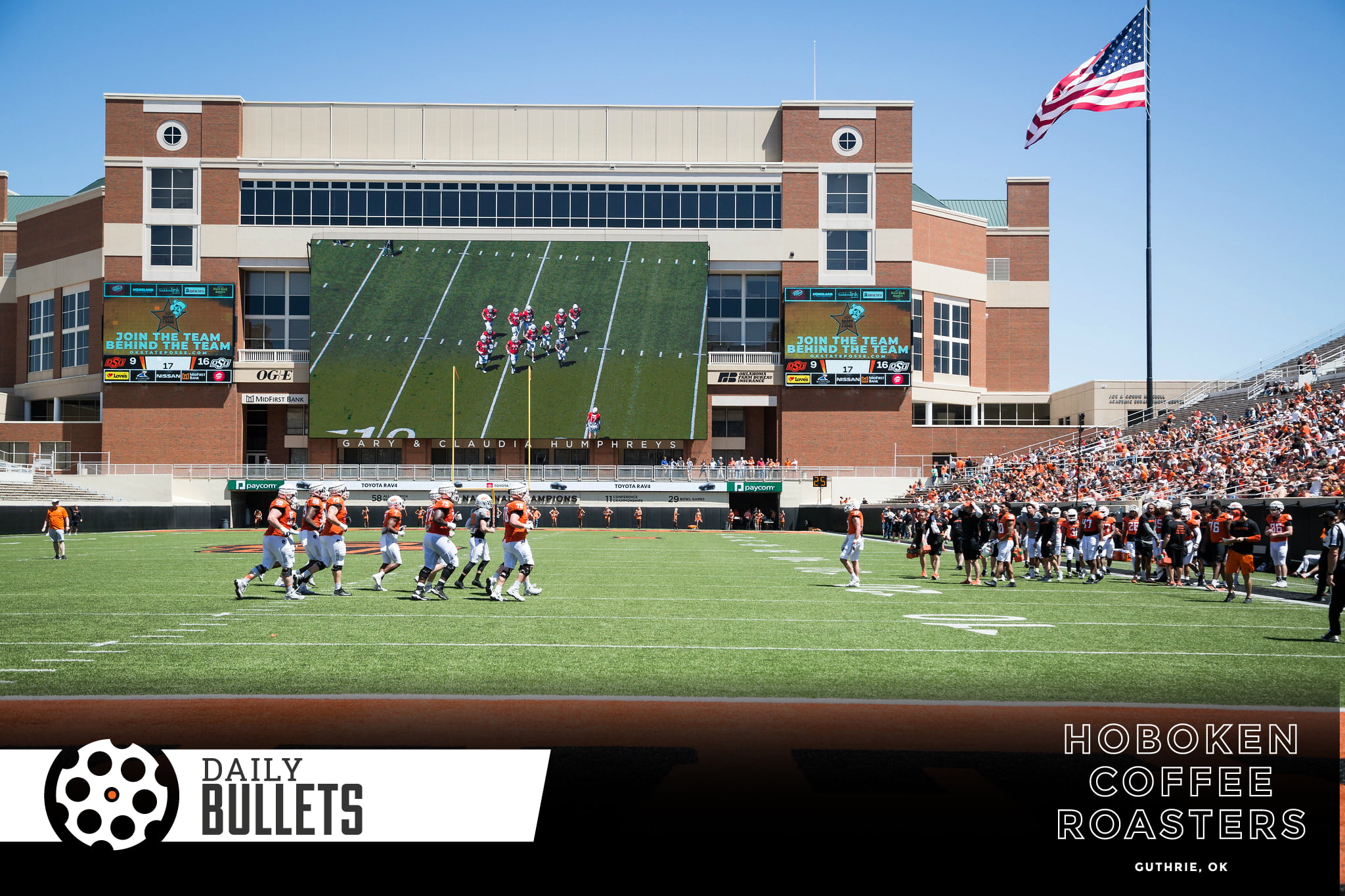 Spring sports in Stillwater have been fun this year – baseball looks like a lock to host a regional, softball headed to supers and golf heading to Fayetteville this week.

• Berry Tramel highlighted the big reasons why the OSU-TU series is a win for the Pokes.

Holder was serious about reviving the OSU-Tulsa series. He even drove the Cimarron Turnpike twice to talk face-to-face with TU athletic director Derrick Gragg. And the series they hammered out is only common sense. Here’s why.

• Finances. This series removes the Cowboys from much of the bidding war for Division I-A opponents. With OSU already playing a non-conference (usually Power-5) opponent every season in a home-and-home arrangement, the Cowboys now must fill only one slot. Often, that’s a I-AA foe.

Some of the price tags to bring in opponents have soared north of $1.5 million for a [single game. Even the 2-for-1 deals get expensive. [NewsOK]

Bidding wars for 2-for-1’s sound like a win to avoid. Also noted was the desire to see orange and black all over Tulsa – OSU’s largest alumni basis (and a recruiting haven).

These reasons are completely valid and deserve a stamp of approval. My only concern is if TU stinks to high heaven and the gap between the have’s and have not’s in college football continues to widen (see TV deals for Big 12 vs. AAC). We can cross that bridge if we get there.

• CBS is noting that the Pokes have the easiest schedule in Big 12 football this fall.

10 OKLAHOMA ST.
Baylor’s noncon schedule is easier than what Oklahoma State will get, as the Cowboys will play at Oregon State and at Tulsa with McNeese sandwiched between. Still, that stretch at the end of Baylor’s schedule just nudged it ahead of the Cowboys here, as Oklahoma State’s toughest games are spread out a bit, and their bye weeks are well-placed. [CBS Sports]

OSU only played a part in one aspect of this honor – non-conference play. And truth be told, it may be tougher to find three power five teams easier to play than Oregon State (Rutgers, Kansas, and….) But a good chunk of this argument is OSU’s odd-year schedule – Bedlam and TCU in Stillwater and a down West Virginia and Texas Tech on the road. Iowa State and Texas on the road are tough.

Sub-plot here is that it’s a good year to be rebuilding in the Big 12 with K-State, Tech, and West Virginia recovering from all the turnover.

• My James Washington bias has shielded me from his struggles in year one with the Steelers apparently.

James Washington earned one of the lowest receiving grades of any qualifying rookie wide receiver in the PFF era (2006-18). Career slot receivers Eli Rogers and Ryan Switzer are question marks with – most likely – disappointing answers even if awarded clean bills of health and ample opportunity.

None of the four misfits (including Washington) mentioned have wowed across significant stretches in their respective careers; none of the four kept Pittsburgh from spending a top-70 pick in the 2019 NFL Draft on a wide receiver. [PFF]

Taking another pick on day two isn’t the greatest vote of confidence but that could just be hedging – they did just lose a top-three receiver. I’d still hold onto your Washington stock, he’s just coming into his second year… and we’re a Big Ben motorcycle skid from Rudolph-to-Washington.

• A (very) late offer just went out for the 2019 Cowboy Football recruiting class – to a junior college linebacker/defensive end from California.

(Trennan) Carlson’s so massive that before the season, Ventura College expected him to play linebacker. But his big frame, broad shoulders and explosiveness off the line fit what the team was looking for at defensive end. He wound up playing inside linebacker, outside linebacker and defensive end, the type of versatility that (probably) made Mike Gundy offer on the spot when he found out.

“The thing about that is, we went the game expecting him to play a lot more snaps at linebacker,” coach Mike Haydon said via the VC Star. “But we found out he had some advantages (at defensive end). [PFB]

My goodness – if the Pokes are able to land Carlson, that’s nearly a hockey-style line change of newcomers at the defensive line with Carlson, Israel Antwine, and Kyle Junior.

For a while there I was starting to wonder if assistant defensive line coach Greg Richmond could put on No. 45 and play on third downs.

What number for college?

• Fun read on Archie Manning and why he’s so beloved in Mississippi – a great read on how the perception of athletes has changed too.

• This faith-based read on place and home is fantastic