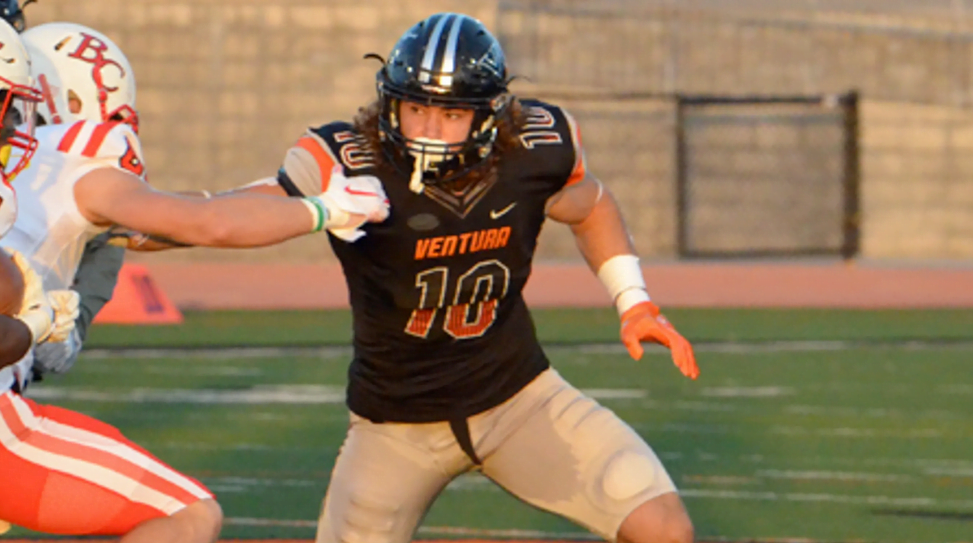 Oklahoma State’s 2019 class was thought to be in the books but could soon be expanding, as the staff made a move this week offering an experienced player from the junior college ranks in an effort to fill a void in its recruiting class.

Ventura College prospect Trennan Carlson, a mammoth 6-foot-2, 235-pound recruit, announced the offer on his Twitter on Friday. Carlson just wrapped his sophomore campaign at the California junior college where he logged 6.5 sacks, 15.5 tackles for loss and 64 tackles overall.

Carlson’s blown up in recruiting circles of late because of a breakout campaign. Since February, he’s received offers from UTEP, OSU and Utah. It’s unclear exactly why he did not sign in December or February, but sometimes prospects who qualify late in the process get more attention when final grades come in.

Carlson’s so massive that before the season, Ventura College expected him to play linebacker. But his big frame, broad shoulders and explosiveness off the line fit what the team was looking for at defensive end. He wound up playing inside linebacker, outside linebacker and defensive end, the type of versatility that (probably) made Mike Gundy offer on the spot when he found out.

“The thing about that is, we went the game expecting him to play a lot more snaps at linebacker,” coach Mike Haydon said via the VC Star. “But we found out he had some advantages (at defensive end).

“He just kept coming and coming last week,” head coach Steve Mooshagian recalled from a game last November. “I almost had to take a breath and just watch him from the sidelines. This guy didn’t let up. His energy level from the first quarter to the fourth quarter is the same. Not many guys can sustain that.”

Better yet, Carlson blazes through sand like an hourglass. No idea if this actually bodes well for his future on-field performance, but he looks like a pro.

“God’s blessings go far beyond anything we could ever dream.” pic.twitter.com/7co6Uw3YXe

But wait, there’s more: He can also hoist 225 on standing shoulder press — in sandals. It’s both unsafe and impressive!

Carlson would be an immediately eligible transfer at his next school beginning in the 2019 season, meaning he’d likely arrive on campus in a mere matter of weeks. If he were to play at OSU it’d likely be as a defensive end, where the rotation is notably thin after losing Jordan Brailford, Cole Walterscheid and Jarrell Owens.

OSU signed three defensive ends in its 2019 class, but all three are incoming freshmen. The staff has also recruited Bowling Green graduate transfer Kyle Junior to the roster and Colorado transfer Israel Antwine, a defensive end/defensive tackle hybrid who, like Junior, is eligible immediately after being granted a waiver from the NCAA.