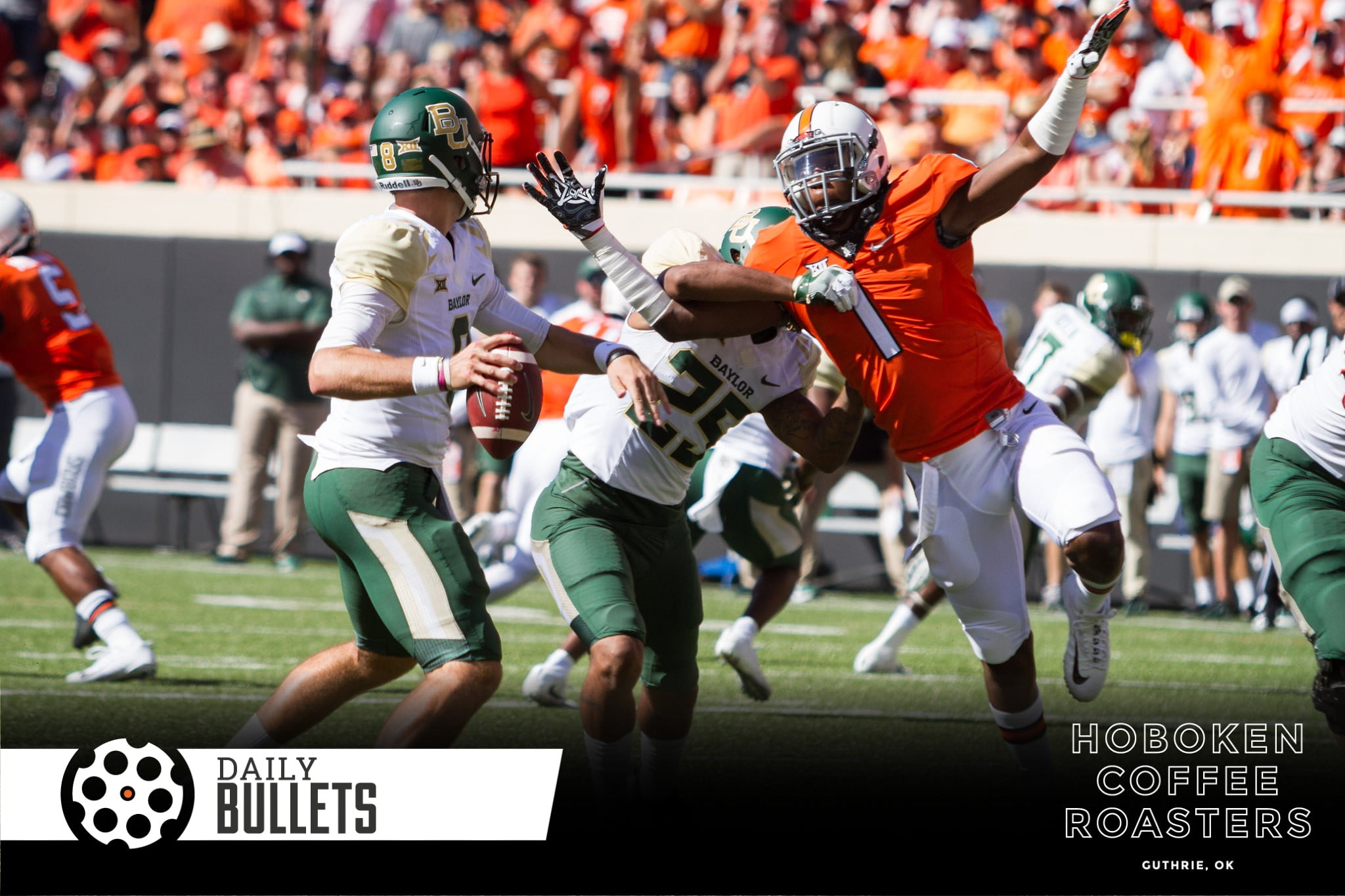 Cowboy Basketball was projected a few spots higher than last year in the league – Boynton’s crew is getting some respect finally.

• This is fun – a new helmet will debut tomorrow and former Cowboy running back Greg Gold helped design it.

Gold, a former Cowboys running back, has a special connection to Saturday’s homecoming game. He designed OSU’s throwback helmet decal.

What the design is, Gold’s not saying. But he had grand plans that he worked on with the Cowboys months ago.

“What I can tell you is that it’s never been done before,” Gold said. “While it may look similar to what we’ve done in the past, it’s definitely not. It brings a lot of mystery and brings a lot of fun stuff. Once it comes out, everybody is going to be like, ‘Ooh.’

“I know I’m biased, but this will hands-down be the best throwback helmet that OSU’s done.” [NewsOK]

• While a game is a small part of a season – now’s as good a time as ever to start winning games that Mike Gundy probably should.

While unbeaten Baylor may not have a running back like Chuba Hubbard or a receiver like Tylan Wallace, the Bears’ overall talent level is at least equal to Oklahoma State’s.

There’s no way to know what Gundy is saying to his players behind closed doors, but the Cowboy coach has to know that the Baylor challenge is beyond important.

If I were coaching the Cowboys, I’d be in panic mode: This isn’t good enough. What we’ve done for two seasons is below the standard we worked hard to establish. [TulsaWorld]

Being a coach is (I would assume) challenging – games played not involving your current roster impact how you think and feel about each fall Saturday. Spencer Sanders had nothing to do with Taylor Cornelius struggling against Iowa State and Texas Tech and even less to do with Mason Rudolph and James Washington struggling to break into the top tier of college football.

But underachieving (over the last two years) is something the program all play(ed) for and pushing through that hump, regaining that ability to pull through in tight games is onto this current iteration of Cowboy Football.

• Daton Fix taking an Olympic redshirt is a bummer

• If Spencer Sanders can brush off his worst outing yet and pull out a win against Baylor on homecoming, how would that impact the trajectory for the rest of the season?

If (Sanders plays well enough), the Cowboys will win. If they win, they will be 5-2 headed to Iowa State on Oct. 26.

Even if they fall in Ames, and fall against Oklahoma in their other remaining game where they will be underdogs, they should still get to eight wins with Kansas, West Virginia and TCU also on the schedule.

Eight wins become nine in a halfway decent bowl game, and now the Pokes look back on a relatively successful 9-4 2019 season. [TulsaWorld]

An eight or nine-win season with a freshman isn’t anything to scoff out. But the weight I keep processing is wasting a potential 2,000-yard-rusher and a bona fide receiving corp.

There’s a fine line between “Play Corn Dog! He’s the best chance you have for 9 wins” (which after a five-turnover game, feels a bit like that may have been going with the Dru Brown option for 2019) and using the 2019 schedule to maximize the 2020 and 2021 seasons.

• Having seen less than a dozen in my lifetime, I don’t have a great grid for the topic but the McKnight Center looks world-class.

#TBT: Take a look back at the @McKnightCenter's opening night 🎼. This is a historic moment for the arts at #okstate and there are many more to come! pic.twitter.com/ldXD2aPLjt

• This kind of consistency is incredible.

Viktor Hovland's 18th-straight round in the 60s is the most by any player on TOUR since 1983.#LiveUnderPar pic.twitter.com/1y2MMxBjhu

• I like this take – focusing on systems over goals

• As a guy with a young family, I love articles like this with ideas for family traditions

• This is pretty cool – literal translations of every country’s name