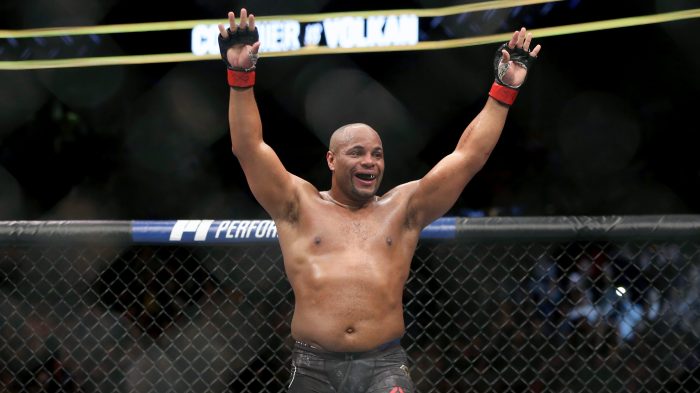 On Saturday night at UFC 252 former Cowboy wrestler, NCAA finalist, and two-time Olympian Daniel Cormier fought Stipe Miocic in the third fight of their trilogy to determine possibly the greatest UFC heavyweight of all time.

In the first round there were a few exchanges and Cormier eventually got a takedown on Miocic. Stipe quickly got out and brought the fight back to their feet. After a few exchanges Cormier poked Miocic in the eye which stopped the fight briefly. Cormier then landed a big shot late to close out the first.

HE HURT HIM! 🤯@DC_MMA stuns Stipe as RD 1 comes to a close. #UFC252 pic.twitter.com/KmpKVzteW7

The second started with Cormier getting hit in the groin then giving up a few shots to Stipe. The pair then exchanged blows before a late combination from Miocic nearly ended the fight.

That exchange seemed to carry over into the third round and wear on Cormier, but DC hung in and weathered the storm. Late in the third Cormier was poked in the eye and in his corner said “I can’t see.”

That is an eye poke 😳 #UFC252 pic.twitter.com/LUskhaYmv5

Even with one eye, the fourth seemed close and many had it two rounds to two going into the 5th.

Final round coming up. I give it to DC.

What heart shown by both men. This is classic stuff.

The final round had some exchanges, but Stipe seemed to get the best of most of them and the final decision went in favor of Stipe Miocic scored by the judges 49-46, 49-46, 48-47.

In the post fight interview, Cormier didn’t back down on his plan to retire.

“I’m only interested in fighting for titles,” said Cormier. “I don’t foresee I will be fighting for a title … that will be it for me.”