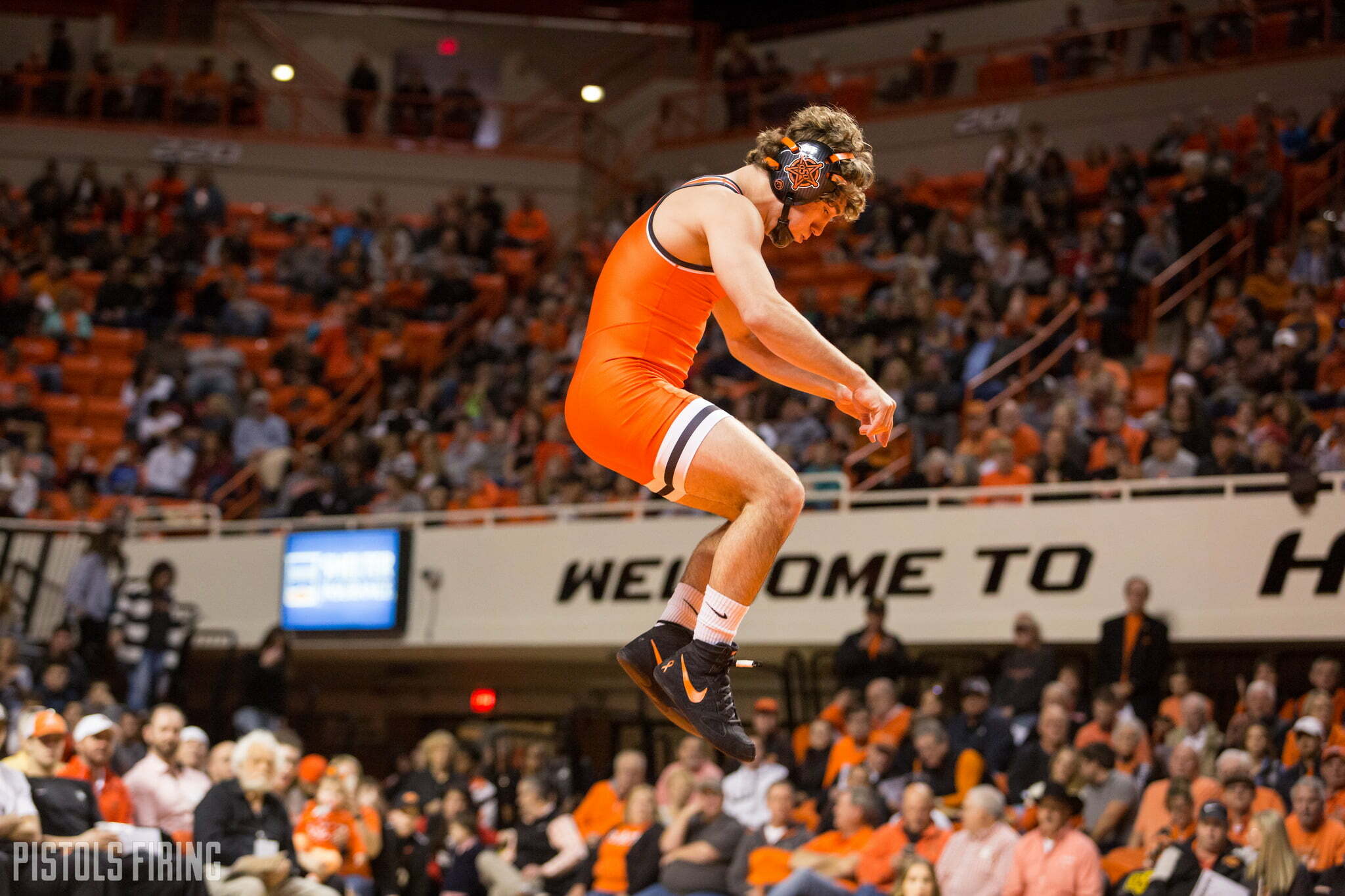 Second-ranked Daton Fix will take on third-ranked Austin DeSanto in a huge match-up vs. Iowa in Gallagher-Iba Arena. This will have big implications in the overall dual and will also play a big role in seeding at the NCAA tournament.

Daton Fix is one of the most well liked characters in wrestling, and not just at Oklahoma State. Naturally fans at OSU love a legacy that’s a World Champion and elite recruit that chose to come compete at OSU. What’s not to like about that?

His popularity extends beyond the campus of Oklahoma State though. Gary Abbott of USA wrestling wrote a great article earlier this year on exactly that.

“Fix, the fuzzy-haired kid from Sand Springs, Okla., is perhaps one of the most popular freshmen wrestlers in college history.”

“…In the age of FloWrestling, TrackWrestling and social media, young wrestling stars like Fix grow up online in front of the entire wrestling nation. There are lots of reasons that he has a fan base already. Fix likes to jump up way high in the air before his matches. He has an amazing offense that lights up scoreboards. He always has this great big smile. Along with that, Fix is a humble young man with an amazing work ethic, a mat rat who just loves to wrestle.” [USA Wrestling]

Outside of maybe some of the Iowa fanbase, his opponent on Sunday Austin DeSanto,  does not have that same reputation. The scrutiny of DeSanto started last year when he was wrestling NCAA finalist Stevan Micic. While down at the end of the match he attempted to put Micic in a kimura, an MMA submission hold that is not allowed in wrestling and is quite dangerous for the person put in it.

This summer DeSanto transferred from Drexel to Iowa. The scrutiny of his actions continued to grow in his first season at Iowa. There’s been nothing quite as glaring as the kimura he attempted on Micic, but a barrage of actions detailed in the video below did lead to a one-match suspension for him in their dual against Maryland.

In the eyes of most wrestling fans this sets up the classic good guy vs. bad guy match-up. Thankfully OSU is on the good side of that equation. Unfortunately as we’ve all seen in life the good guys don’t necessarily always win. And this is a match that could certainly go either way. Though many of DeSanto’s actions create questions regarding his character, no one is questioning his talent, he’s a great wrestler. Fortunately Daton is as well and their personalities and talents create a great story-line for what should be a top notch wrestling match on Sunday in Gallagher-Iba.