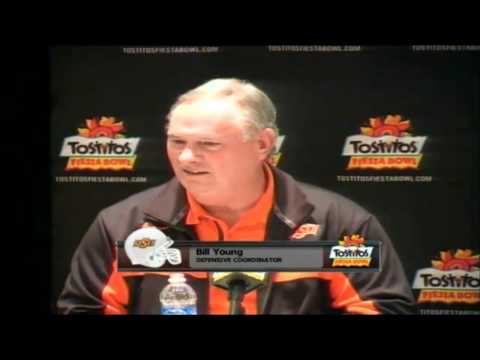 Dave Sittler and Bill Young have a really interesting conversation that I’m betting all my January paychecks neither knew was being picked up by the microphone. Take a look below with some comments after the jump.

– I like how Sittler makes it a point in the first two seconds to let Young know that he has his tape recorder turned off but neither of them checks the mic. That’s pretty funny.

– Sittler calls John Blake a slapdi** after Bill Young says “it wasn’t fun” about being at OU under Blake in 1996-1997 then Sittler goes on to claim that Donnie Duncan (OU’s athletic director at the time) told him that the only reason he gave John Blake the head coaching job for OU was because he was black and they were worried that Bob Simmons had an advantage in recruiting. That’s quite a 20-second exchange, no?! I mean, WOW!

– Love when Young says “…and three years later we forgot how to coach.”

– What does Young mean when he says “I would almost bet you 100% that some of these schools…maybe even the one down the street [came after Gundy]”? What are they going to do, fire Stoops?

Update: as a few of you have pointed out, Young was referencing Arizona State as “the school down the street”, not OU. Makes sense now.

– The long-range shot of the two talking at the 3:40 mark really shows you that they have no clue they’re on the mic.

– “I just hope I’m going to be back.” Assuming he’s kidding, because If he’s not, that’s a travesty. He’s done a great job with the defense this season and seems like a great fit for the position. Also, he’s the only guy on the staff too old to be considered for a head job!