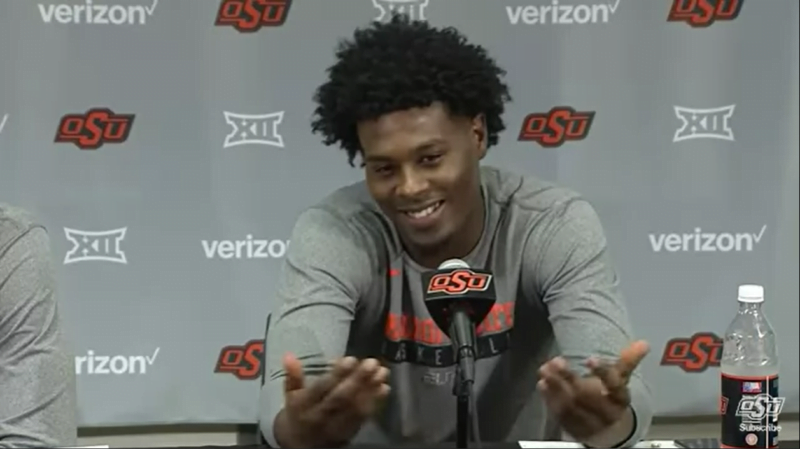 Davon Dillard sat next to teammate Leyton Hammonds at the podium Saturday afternoon following their team’s 84-71 win over Texas. The questions they were asked began to follow a common theme. One after another the sophomore and “freak athlete” as his counterpart referred to him, was asked about this top-10 put-back slam.

Finally, Dillard was asked about about the history of dunkers at OSU and where he saw his self on that list.

“Of course, I’m going to say number one.”

The question was brought up referencing the likes of Jeff Newberry and Markel Brown. We apologize, Mr. Mason, Mr. Graham and Mr. Allen.

“I actually had the chance to play with Newberry. He was definitely a freak athlete. — I’ve never seen nobody like that, especially at his size, 6-2. Markel, I never seen him play but I watched highlights. Coming to this school I seen his highlights. He’s a great athlete and a great friend, as well. But of course I’m going to rank myself number one.”

It’s all in fun and I love his answer. Who knows? Dillard may end up pushing the Desmond Mason’s and Markel Brown’s of the world for OSU dunker supremacy. It’s sure going to be fun watching him try.