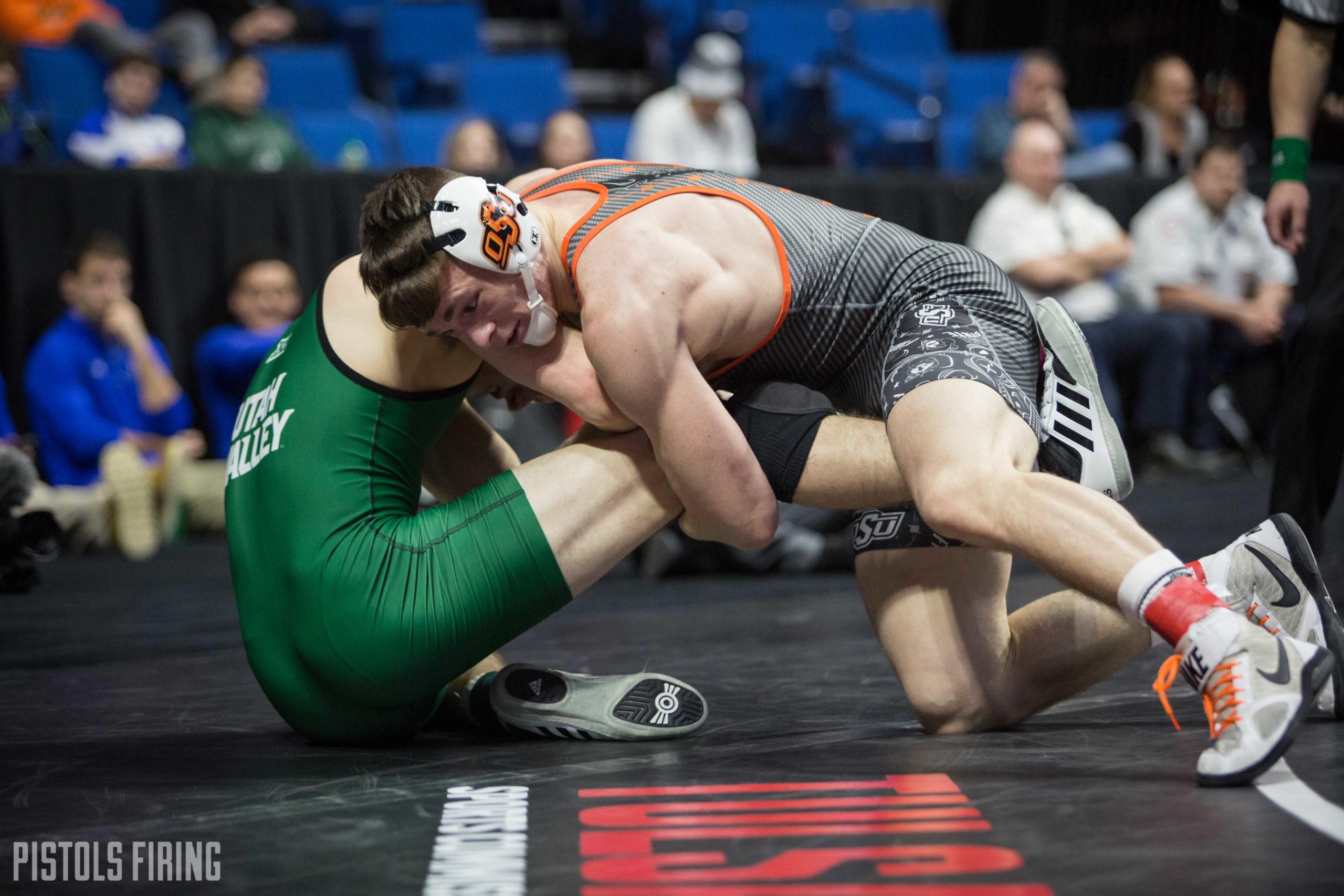 TULSA — After the first session of the Big 12 wrestling tournament, it was fairly obvious it would be a two-horse race. The horses, Oklahoma State and Iowa State.

The Cowboys ended the day atop the team standings, scoring 111.5 team points to Iowa State’s 92. But after that first session, the Pokes found themselves in unfamiliar territory in conference wrestling, trailing. Iowa State was up 64-61 after the first set of matches.

After Saturday’s results eight OSU wrestlers have qualified for the NCAA Championships, with Joe Smith also getting a bid with a with a win in Sunday’s morning session. The Cowboys have four wrestlers in the finals in Nick Piccininni, Boo Lewallen, Wyatt Sheets and Travis Wittlake.

Lewallen’s semifinal bout was a big one in the team race. Lewallen took on Iowa State’s Jarrett Degen with a spot in Sunday’s final on the line.

Lewallen started hot, taking a 6-3 lead into the second period after a hat trick of takedowns in the first. But in the second things almost turned disastrous for Lewallen and the Cowboys as a team. In quick succession, Degen got an escape, a takedown and two back points.

Lewallen fought off his back, though, and went into the third period down 8-7 after a dominant first period.

With Degen on top in the third, Lewallen was able to send his opponent over his head and catch him in a cradle, ending the match with a 6:16 fall after nearly getting pinned himself.

149 | The reversal and turn that sent Boo Lewallen to the Big 12 finals and gave the team lead back to #okstate!#GoPokes pic.twitter.com/YaZIY2fg83

“Getting my second title,” Lewallen said on what he is looking forward to in the finals. “I’ve only been here twice. Just hope to go out and preform at my best.”

Sheets also put up a solid performance. He entered the day as 157’s third seed. In the semis he wrestled second-seeded Jared Franek out of North Dakota State. Sheets dominated en route to a 14-5 major decision.

So, Witcraft fell down to the consolation bracket, and unfortunately for him, he matched up against top-seeded Taylor LaMont out of Utah Valley, who was upset in his first match. But despite falling to an unseeded foe, Witcraft sent the weight class’ top seed home with a 5-3 decision.

But after beating the top-seeded LaMont, Witcraft fell to unseeded Lawrence Saenz out of Fresno State in his next match.

Despite the madness, Witcraft secured a spot to nationals as the conference got eight bids at the weight class. He’ll take on West Virginia’s Lucas Seibert in a seventh-place match Sunday.

The Cowboys are in a prime position to secure their eighth straight conference crown. OSU and Iowa State each have four wrestlers in the finals, and the Pokes already have a cushion. It would be the first time OSU won eight straight conference titles since 1928.

“I thought [the response] was good,” Smith said. “Just from the standpoint of if you’re gonna win a tournament, you gotta win matches, and I thought we did a pretty good job tonight. I think we ended up with several wins and I think two losses. That’s good for the evening competition, makes a difference in the scoreboard and makes a difference for us tomorrow.”

Cowboys in the Finals

Cowboys in the Consolations

133 – After his 1-2 day, Witcraft will face West Virginia’s Lucas Seibert in the seventh-place match.

141 – Dusty Hone started Saturday with a win but fell to OU’s Dom Demas in the semifinals. He’ll wrestle South Dakota State’s Clay Carlson on Sunday in the consolation semifinals.

174 – After a win in sudden victory to start his day, Joe Smith fell to Northern Iowa’s Bryce Steiert in the semifinals. Smith takes on Wyoming’s Hayden Hastings in the consolation semis on Sunday.

197 – Like Montalvo, Dakota Geer started his day with a pin before falling in the quarterfinals. Geer beat Iowa State’s Joel Shapiro and North Dakota State’s Cordell Eaton in the consolation bracket. Geer starts his Sunday against OU’s Jake Woodley.

HWT – Austin Harris is the only Cowboy whose tournament is over. Harris fell to Wyoming’s Brian Andrews to start the day and dropped his first consolation match to North Dakota State’s Brandon Metz.