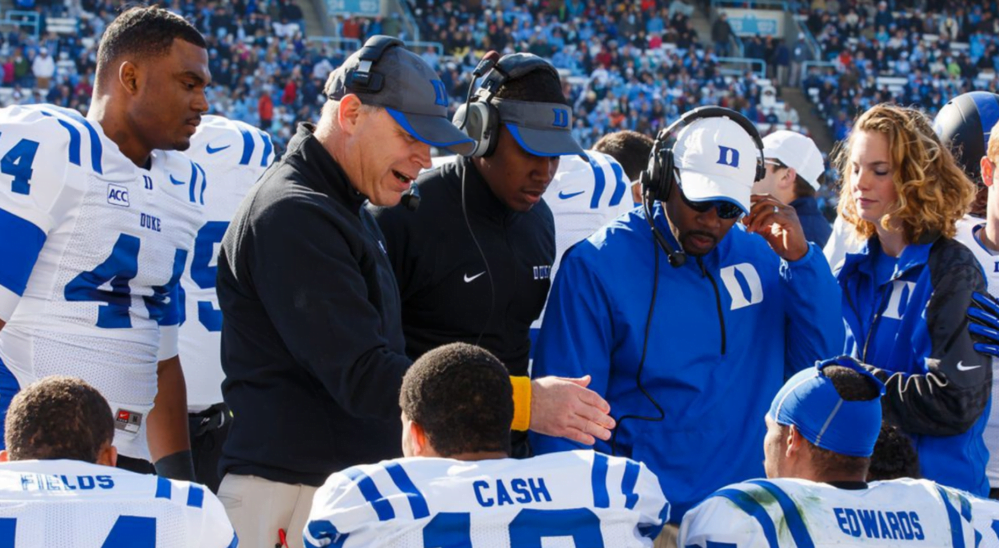 Now that the dust has settled on the hiring of Oklahoma State’s new defensive coordinator Jim Knowles, it allowed some time for a little film study and research. There were some conflicting opinions on the hire, with OSU fans on the fence about what to think.

I was able to link up with Thomas Fleming for a quick two-person roundtable to discuss a few important topics on the hire and what it means for Oklahoma State moving forward. We were both able to watch a few Duke games from last season to better understand Jim Knowles defensive style.

1.What is your opinion on Jim Knowles pedigree and defensive style?

Adam: I think it is an interesting story. Knowles did some nice work at Duke, a school with no football tradition to speak of and with limited talent. More importantly, he brings a very aggressive style to the table. He was able to field some competitive defenses over the years, although the ACC-Coastal is not an overly impressive division in terms of offense so those numbers are inflated. He is in for a much bigger challenge taking over at Oklahoma State.

Thomas: Knowles’ numbers don’t exactly pop but he deserves some slack considering what he was working with. As far as strategy-wise, he seems to keep things fairly simple and emphasize execution. I read a recent article that compared him to Bill Young without the stress on turnovers. It referred to how he found success through simplicity. I just hope that means he doesn’t play his corners 20 yards off.

2. What are some main differences between what Glenn Spencer brought to the table vs. Jim Knowles?

Adam: Not sure they could be any more different. Although Spencer definitely tried to adapt over the years to bring multiple fronts and different blitz packages, he couldn’t separate from his base coverage stigma.

Knowles brings a very aggressive 4-2-5 scheme to Stillwater. Based off of some quick film review, I saw a lot of tight outside man coverage, and safeties flying downhill to the line of scrimmage generally leaving one safety high. Even when there were two safeties high, you could clearly see more of an inclination to sit flat-footed before getting into their drop, a good indicator that it’s a run-first mentality.

There will be help inside, but the corners will be expected to play inside leverage and force WRs to the sideline. Certainly, a stark contrast to Spencer who played a lot of off coverage and deep zones. It’s a double-edged sword, though. Knowles’ scheme will bring about a lot of this:

Thomas: I think Spencer was willing to try a lot of stuff. He had multiple defensive packages, used three- and four-down sets and disguised coverages. I think this past year was tough because the inexperience forced him to call things more simply. Knowles does disguise, but from the little film I saw he loved going one-high and forcing your offense to beat him. I like that.

3. How does his style fit with the current OSU personnel and do you think he can have success in short term?

Adam: It all depends. This type of style requires a lot of coaching, specifically in the secondary. You have to completely shift your mentality from keeping everything in front of you, to a more physical style of coverage. Given the young corners on the team, and a group of somewhat unknown safeties, there could be growing pains.

For the short term, a big challenge will be finding how to maximize Calvin Bundage and identify safeties who can fill the specific roles in the scheme. The faster the corners develop, the faster the scheme can work to its full potential.

Thomas: He uses a 4-2 front but puts a bigger stress on corner play and his hybrid/safety role’s ability to cover and tackle. We mentioned how a guy like Calvin Bundage will need to develop his coverage skills but if you watched Duke’s Dylan Singleton, you see how effective that type of player can be when he can hit and provide coverage support. I think they can find success in the short term but it will come down to corner play and how aggressive he is with isolating them.

4. Can he recruit players to OSU that will fit his scheme?

Adam: Absolutely, and this is why you should be excited that this hire might work. Knowles was able to bring in some decent talent at Duke, and the rest of the defensive staff have proven their ability to be competent recruiters. Oklahoma State has always had the ability to recruit talented defensive backs. With two young corners coming back, and a solid freshmen class things are on the up. Just look at this tweet with four NFL DBs pictured.

Thomas: I have no idea. They’ve nabbed some pretty talented kids in the past couple of years but I don’t know how much of that is Knowles. The only person I’ve talked to about it said it’s not his strength.

5. How does his style fit when facing Big 12 offenses?

Adam: There isn’t a good style of defense to face Big 12 offenses, that’s why it’s so hard. Five of the top six teams in the league last year had more rushing attempts than passing attempts. Think about that for a minute. The Big 12, which is apparently this crazy air-raid conference, rushed the ball more than they passed it.

The offenses in this league are dynamic, bottom line. There isn’t a right answer, there is only the least-wrong answer. His style will definitely put pressure on opposing run games and horizontal spread concepts (see below), ultimately it will force teams to beat you down the field.

Thomas: I think it will fit fairly well. Every article I can get a hand on says his defense specifically plays well against the spread.

6. Are you excited about the hire?

Adam: I think this is a savvy hire if they can find the right mix. I called for Gundy to hire a guy who could win specific situations (you can read that HERE) and he did just that. In this case, an aggressive style controlling the short/middle and forcing teams to push the ball down the field/sidelines vs. pressure.

There will be big plays surrendered, just prepare yourself, but the aggressively style will create situations where they can dominate. If they are able to find the right players in the secondary, it could really shake up the Big 12 – which is primarily a quarters/zone-oriented league. Although some have called it a hire that is not splashy, I tend to think the opposite. Whether or not Knowles is a flashy name, his is a style is a huge change in strategy, which is what fans wanted.

Thomas: I wanted the guy from TCU, but let’s be honest here — a defensive coordinator position at OSU, considering the conference and location, isn’t the most attractive destination. National media loves the hire and his past year’s production is impressive. I’m worried, though, about how lackluster Duke’s numbers were before that and whether that can be credited to personnel or coaching.