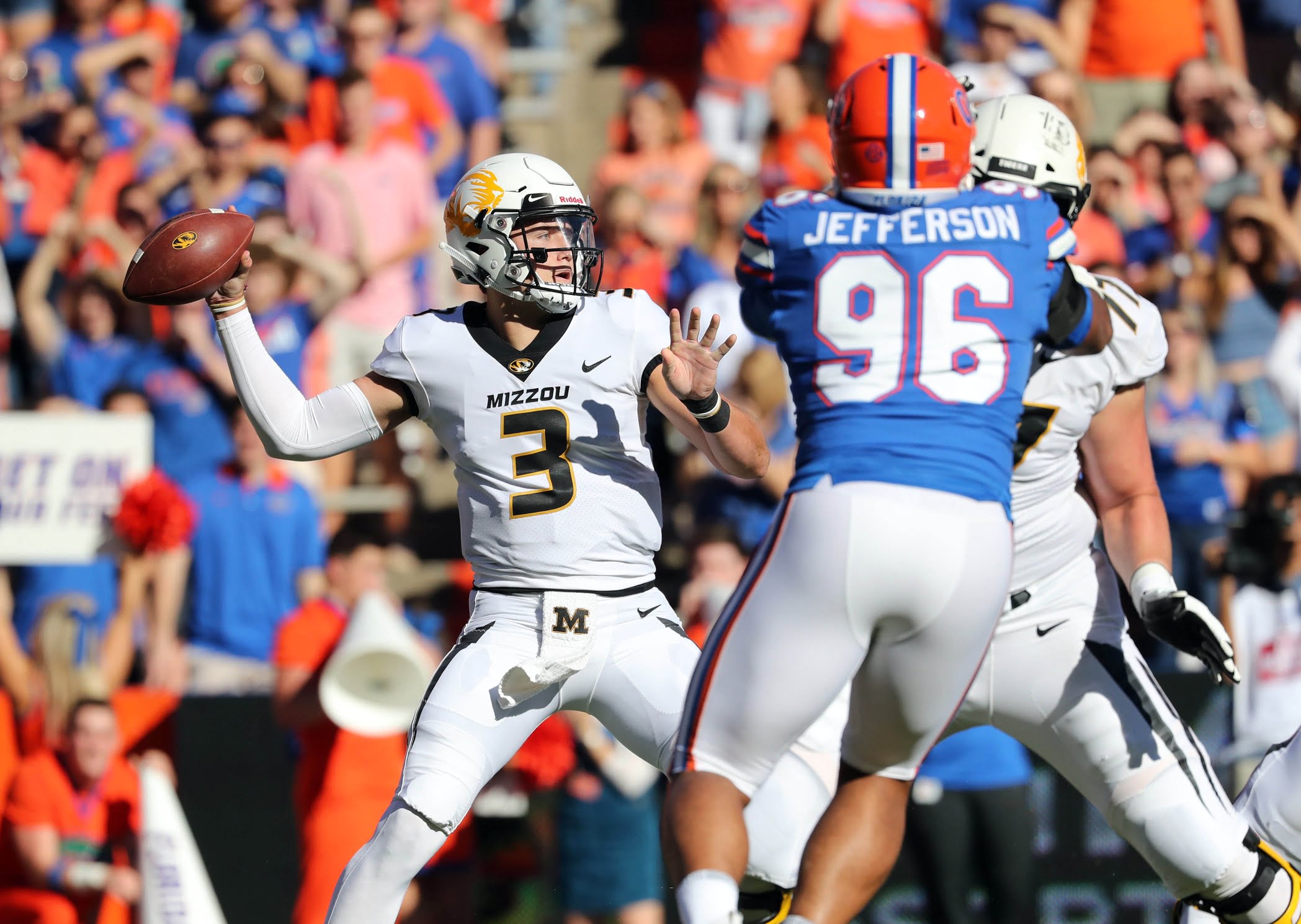 Heading into Oklahoma State’s New Year’s Eve matchup with the Missouri Tigers in the Liberty Bowl, I wanted to take a look at some keys to the game for the Cowboy defense.

The Tigers powerful offense is led by Second Team All-SEC quarterback Drew Lock and includes several dynamic weapons such as running back Larry Rountree III and wide receiver Emanuel Hall. Not to mention they have an offensive line which has only allowed 13 sacks on the season, good enough T-9th in the nation.

Before we dive into the keys to the game for OSU’s defense, I am going to give a little background on Missouri’s scheme.

Missouri is in its first season under new offensive coordinator Derek Dooley, who has made stops as an assistant or head coach at Georgia, SMU, LSU, Louisiana Tech, Tennessee as well as in the pros before landing in Columbia. Dooley has implemented a pro-style system and brought over passing concepts from his recent multi-year stint with the Dallas Cowboys. This style is different from his predecessor Josh Heupel’s spread offense which contained more air-raid concepts.

Heupel’s offense consisted of a lot of simple concepts and asked for quarterback Drew Lock to only read one half of the field on many occasions. Dooley’s passing concepts utilize the entire field and there are a lot more routes and overall concepts the Mizzou receivers had to learn in his playbook.

Regarding their offensive sets, the Tigers primarily run out of 10 (1 running back, 0 tight ends) and 11 (1 running back and 1 tight end) personnel. However, they will line up in 12, 20 and 21 personnel groupings and Dooley uses a variety of different formations out of these sets. A majority of their success this season has come from 10 and 11 personnel sets, shown below. 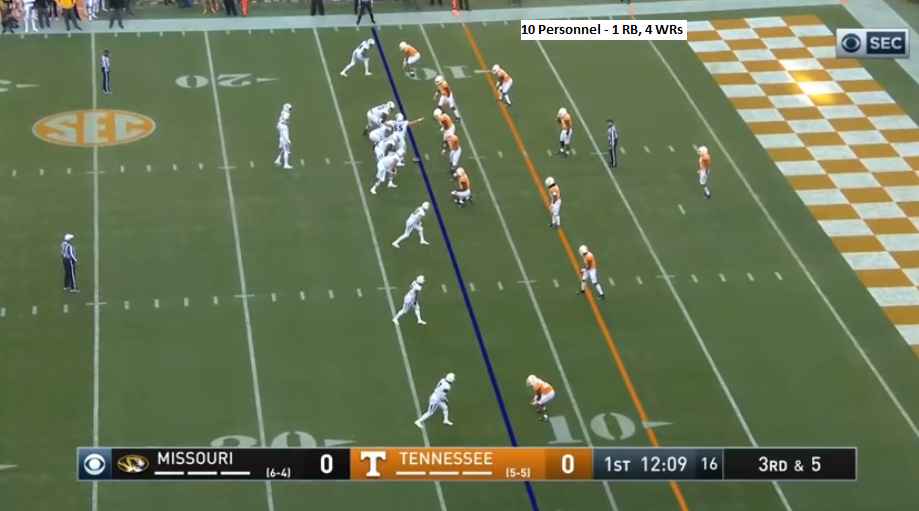 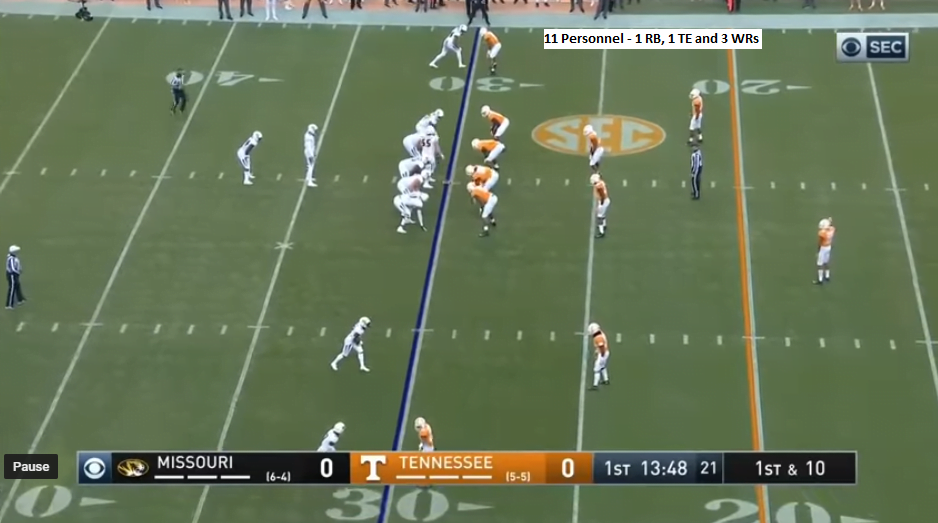 Overall, they have a pretty balanced attack and like to get the ball to Rountree III and Tyler Badie in the running game and Hall and Johnathon Johnson in the passing game. Damarea Crockett and Albert Okwuegbunam are two other weapons for this Tiger offense, but both have been banged up as of late.

Take Away the Deep Ball

Lock and Hall have connected on the deep ball many times this season for a multitude of huge gains and several touchdowns. Hall doesn’t meet the qualifications to be ranked on the national level, as he missed time with a groin injury, but if he did his 21.6 yards per reception would put him 3rd in the country. He had a huge game to end the regular season against Arkansas, recording 6 receptions for 153 yards and 2 touchdowns, including the 67-yard TD shown below.

If the Cowboys want to win this game, they can’t allow Lock and Hall to connect on deep passes. Lock averaged 12.4 yards per completion during the regular season, but only 10.8 yards per completion in Mizzou’s four losses, which were all games in which Hall missed due to injury. In addition, five of Lock’s eight total interceptions this season came in those four games, including the one in the following clip.

This was something that plagued Lock at the beginning of last season as well, as he had issues in 2017 before he and Hall built a connection and were able to attack opposing defenses vertically. If the Pokes can eliminate (or at least subdue) the deep passing game, they might be able to force Lock into some questionable decisions and create some turnovers.

This may call for Jim Knowles to play more of a shell, as opposed to his typical aggressive tight man-to-man coverage on the outside, mixing in more Cover 2 and Cover 3 zones. When they are in man, cornerbacks A.J. Green and Rodarius Williams will need to be solid in their technique, whether it be turning on time, keeping up with the receiver downfield, or finishing and attacking the ball at its highest point, they will need to minimize mistakes in all areas.

As I mentioned above, the Missouri offensive line has only allowed 13 sacks this season. However, when teams have gotten pressure on Lock they have been successful, as 9 of the 13 total sacks came in the Tigers’ four losses. Bringing pressure from multiple levels has worked at times this season against the Mizzou offensive line. In the clip below you see the corner blitz occupies the Tiger running back, and when the defender breaks through up the middle, there’s no one left standing in his way.

The Cowboys have had success bringing pressure from the second and third levels against many teams this season, including solid offensive lines like Oklahoma’s unit as we see in the following video.

Knowles has done an excellent job this season of showing different looks and mixing up his blitz packages. He will need to continue this against Dooley’s Tiger offense and look to confuse the talented Mizzou quarterback and hurry him early and often.

If the Pokes can pressure Lock and take away the deep pass, this should force him into making some tough throws. Forcing turnovers will be key for the Cowboys if they want to leave Memphis with a victory.

Now, I didn’t really touch on the Mizzou running game, but it has been above average pretty much all season and the Pokes shouldn’t take it lightly. However, with this being the last game in which Lock will be able to showcase his abilities for NFL scouts (outside of the Senior Bowl), I assume they are going to toss the ball around for a majority of this contest. If the Cowboys can hold Lock to a low completion percentage and force a couple of turnovers, I think they will have a good shot at coming away with the win.