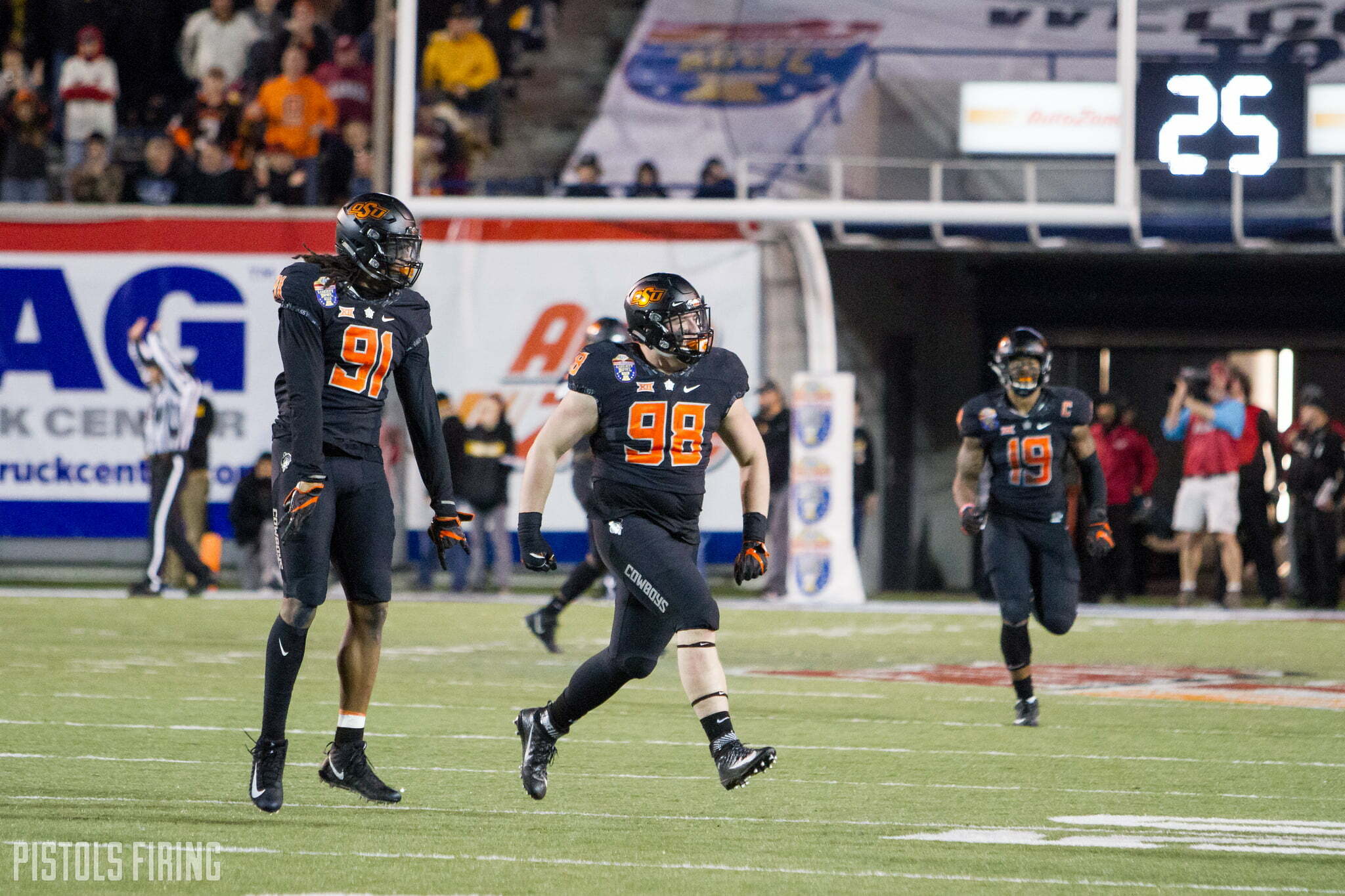 There are a lot of factors that suggest Oklahoma State should be better on defense in 2019 than it was in 2018.

A second-year DC. Returning starters at every safety and cornerback spot. A year’s worth of experience and an offseason under the belt of the freshmen who were thrown into the fire.

Things are looking up.

But the unit is due for a bit of an overhaul ahead of next season. Darrion Daniels is headed to Nebraska, Cole Walterscheid is out of eligibility, Jordan Brailford is NFL-bound, and Kenneth Edison-McGruder is in the same boat as Walterscheid.

So with that in mind, let’s take a look at how things might shake out for next season in a way-too-early preview of the defensive depth chart before spring ball.

The CB take: Assuming AJ Green and Rodarius Williams are back, as expected, they’ll almost assuredly be locked in as starters. Behind them will be redshirt freshman JayVeon Cardwell, who played sparingly in 2018, as well as Texas A&M transfer Kemah Siverand who will be playing out his final year of eligibility.

The DE take: This is the position that is replacing the most, but The Office star Michael Scott should be ready to step into a starring role at defensive end in 2019. He was a monster when positioned as a stand-up edge rusher behind Jordan Brailford in 2018. Opposite him, I like in-state star Brock Martin to step up and fill the other DE starting role. Colorado transfer Israel Antwine is the X-factor here — if he gets a waiver to play immediately, as expected, he’ll play big minutes. The fourth DE in the rotation is a mystery, however. My money is on Braden Cassity, who redshirted in 2018, to step up and play.

The DT take: Both DT starters are being backfilled, but Joe Bob Clements and Greg Richmond have recruited well and shouldn’t have a major dropoff in production overall. Returning players Cameron Murray and Brendon Evers have the early leg up, but don’t sleep on DE-turned-DT Tyler Lacy here. He’s going to be a star.

The ILB take: Of all the position groups, linebacker is the one that feels the most impossible to predict. Macon could be the starter or the third-stringer (or DE?!), dependent upon health. And Harper could be the starter inside or a backup outside. But I feel confident saying Harper and Ogbongbemiga will play a healthy amount in a quazi rotation. Macon is still listed at LB on the OSU online roster, but a move to DE may be in his best interest to snag playing time. The two-deep feels pretty solid barring an injury.

The OLB take: Bundage was a mysterious no-show in the bowl game, but he’s proven to be the most promising talent at the outside backer spot. If he and Jim Knowles can get on the same page, I think he’ll be the starter. Behind him is veteran Kevin Henry, and behind him? I’m rolling with true frosh Kam Farrar. Kid’s a stud. At 6-foot, 200, I’m not counting him out as an early contributor.

The bandit take: The back end of OSU’s defense was significantly more sound when Malcolm Rodriguez was in the game, and a year’s worth of experience and an extra offseason of improvement should only solidify that. He’ll be the starter. Behind him is veteran Za’Carrius Green, who got a ton of buzz last preseason but never grew into a major role, as well as redshirt freshman to-be Sean Michael Flanagan and true sophomore Tanner McCalister, who moved from corner to safety. McCalister could play anywhere on OSU’s safety unit, but bandit seems the most logical fit.

The strike take: Jarrick Bernard is the unquestioned strike starter, and then you’ve got Jason Taylor and Tre Sterling competing for rotation minutes behind him. I like Taylor, the former in-state standout from Carl Albert, but Sterling has a year’s worth of experience on Taylor.

The rover take: I’m all in on this position being rock solid for the foreseeable future with Kolby Peel, who … may play on Sundays one day? He’s an incredible talent and former outside linebacker who slimmed down to become an unlikely star in OSU’s 4-2-5 defense at the rover safety spot. Kanion Williams is another player who will push Peel for playing time as well. Williams redshirted and played four games.