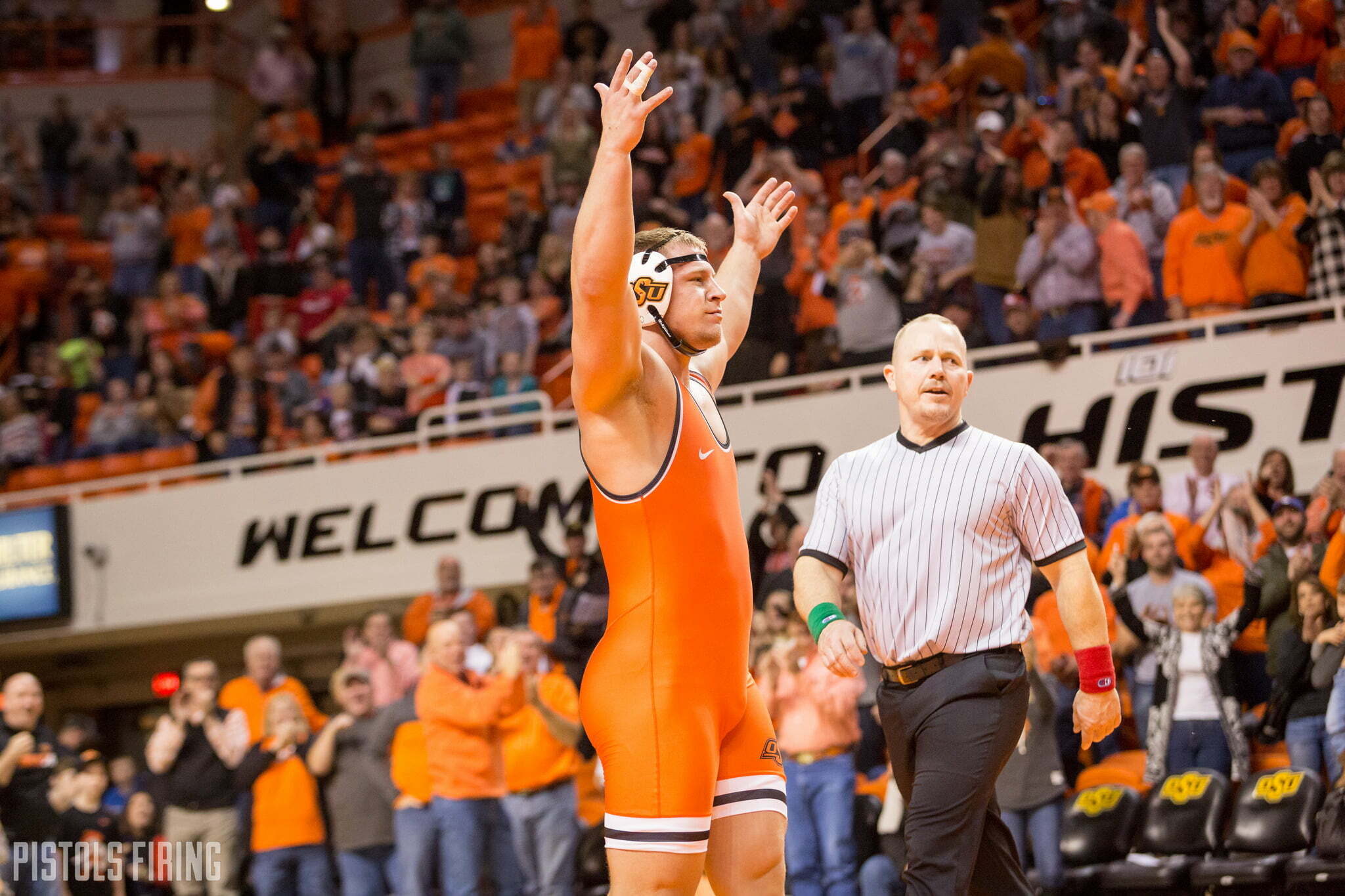 Oklahoma State went 2-2 in the semifinal round as Derek White and Daton Fix both made the NCAA finals for the first time. Here’s how it all went down.

Daton Fix wrestled fifth seed Luke Pletcher of Ohio State. Fix picked up a takedown about one minute into the first period and put together a strong ride to ride out Pletcher for the rest of the period. In the second Fix took bottom and got away quickly. Pletcher took neurtal in the third and eventually got a takedown. It was a bit too late though as Fix had riding time locked and picked up the win 4-2 to make the finals as a freshman.

Derek White methodically worked through a very stereotypical heavyweight match. Not a ton of action outside of two escapes and it goes into sudden victory overtime. In overtime White got the takedown to make the NCAA finals.

In the big rematch between Nick Piccininni and Spencer Lee, Piccininni was taken down early by Spencer Lee to go down 2-0. He exchanged some scores to get it close. Down late in a bit of a desperation move to try and tie it up, Nick was taken down and put on his back to lose 11-4.

Weigel gave up two fireman’s in the first to go down 4-2. Moore took neutral in the second after Weigel deferred and got two more takedowns. Weigel took top in the third where most hoped he’s be able to use his incredible top game to get some turns. Moore was able to get away and rolled to a 12-4 win.

On the consolation side the Cowboys had two wrestlers vying to become All Americans with Dakota Geer and Kaid Brock.

Kaid Brock took on Kyle Shoop of Lock Haven. Brock was taken down early and then put on his back to go down 6-0. He mounted a pretty impressive comeback with a bunch of takedowns and eventually went up 10-8 late in the match. Shoop got a late reversal and put Brock on his back to win 14-10.

Dakota Geer basically just beat the brakes off Nino Bonaccorsi of Pitt. He got a few takedowns and a ton of riding time to win his blood round match to win 6-0 and become an All-American.

Dakota Geer rides out the match and @CowboyWrestling will add another All American to their list! #NCAAWrestling pic.twitter.com/1wOzAnNPJv

Dakota Geer battled in his consolation quarterfinal match and ultimately fell 5-3 in sudden victory overtime to Ryan Preisch of Lehigh.

Here’s what the Cowboys have up next:

OSU currently sits in third place in the team standings.