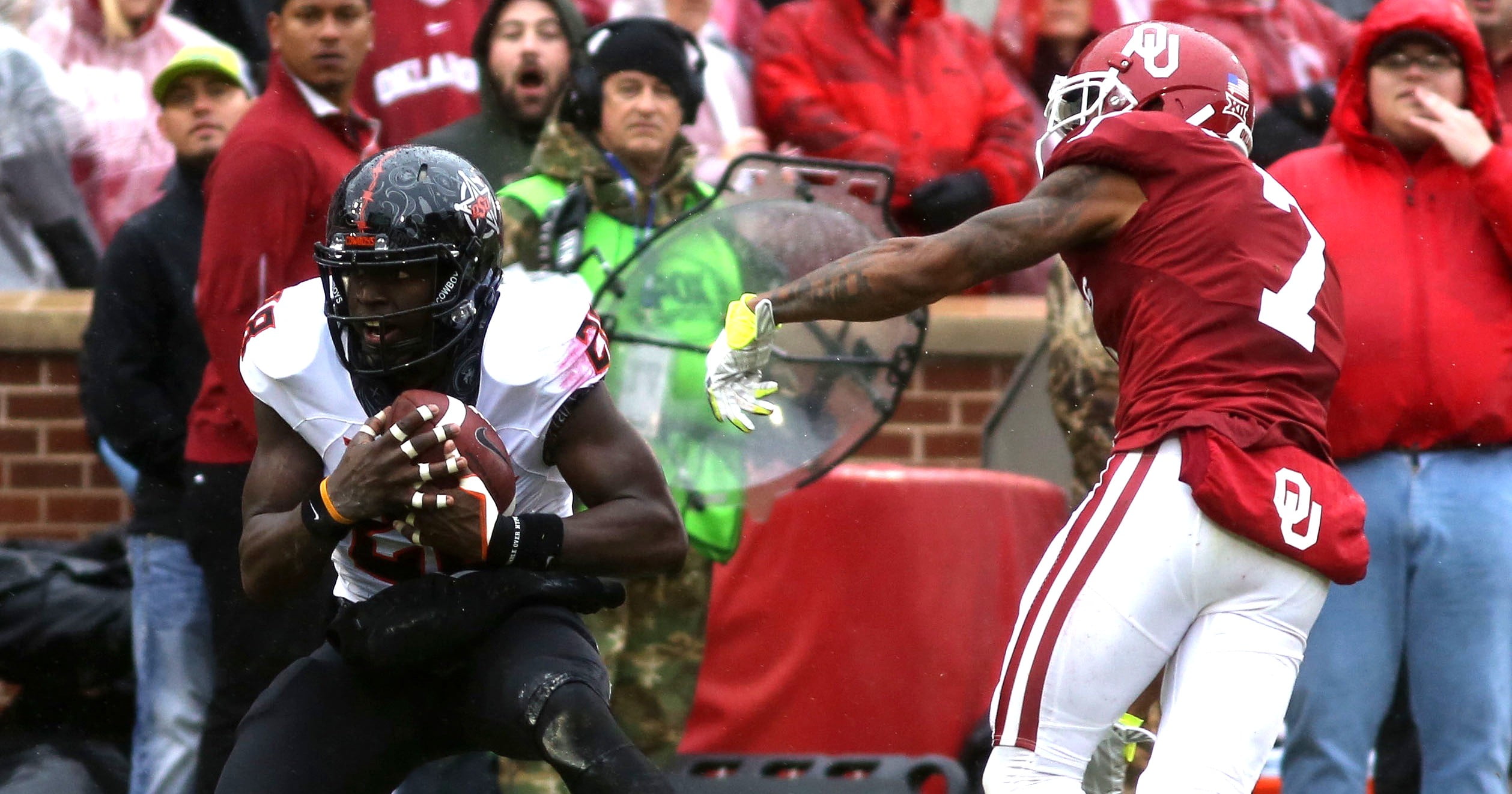 Mason Rudolph has been one of the best downfield throwers in the nation all year. He is No. 9 in the country with 34 passes of 20+ yards. And look at his odd passing chart from Saturday in Bedlam (via PFF). So the question is this: Why not throw it deep on an OU secondary that ranked No. 96 in the nation in pass plays of 20 or more yards given up? Why not let him unload a couple in the second half when OU was clearly keying in on an outstanding OSU run game? Why not let him try to do this a few more times?

Outstanding pitch and catch from Rudolph to Seales. pic.twitter.com/rukU5d3sZV

Mike Stoops said OU played OSU straight up in the second half.

“We played a lot of straight stuff and didn’t do anything dramatically different,” said Stoops. OSU did not take advantage. Was it because of wet balls? Bad weather? That didn’t seem to affect Rudolph on his other three deep passes.

“We were not having the best of luck throwing the ball downfield accurately, with the way the ball was rotating,” said Mike Gundy after the game. “We couldn’t get a very good grasp of the ball. It wasn’t a really good day for us to have an opportunity to throw it down the field.”

Except that is literally the only thing you were doing well. Rudolph was 3 for 3 going deep. Gundy has always said he doesn’t like throwing deep, but it was a huge mistake in a Bedlam game in which you desperately needed a big play and had no other way to get it.

Plus the weather didn’t seem to affect anyone else.

“No big effect,” said Chris Carson. “We practiced with it this week. So you just have to go out there and play, execute.”

“They have to play with the same ball in the same conditions as us,” said Baker Mayfield who threw for 288 yards on 19 attempts. “There’s no excuse for not playing well and not doing your job. It’s just a matter of getting everyone involved and making sure you do your job.”

OSU’s job of winning this game would have been made much easier if it had treated OU like Pittsburgh and let it fly a little bit. I thought Rudolph was bad, but I don’t think Mike & Mike’s plan helped him out very much.

“He has great eyes and a great arm,” said OU safety Steven Parker. “It was one of those things that we had to limit him.” It’s pretty clear that OU was not excited about the prospect of defending the deep ball from Rudolph … and OSU did them a lot of favors.

Is throwing it deep on every play ideal? Of course not. Nobody wants that. But plans change, and games shift. On a day when Rudolph clearly doesn’t have his short stuff, let your deep playmakers make plays. Accuracy is less important when you’re going long, and it is more imperative that you have fast, physical receivers who can overwhelm a secondary (WHICH IS EXACTLY WHAT OSU HAS!)

So the answer to the question in the headline? I have no idea, and neither does anyone else.