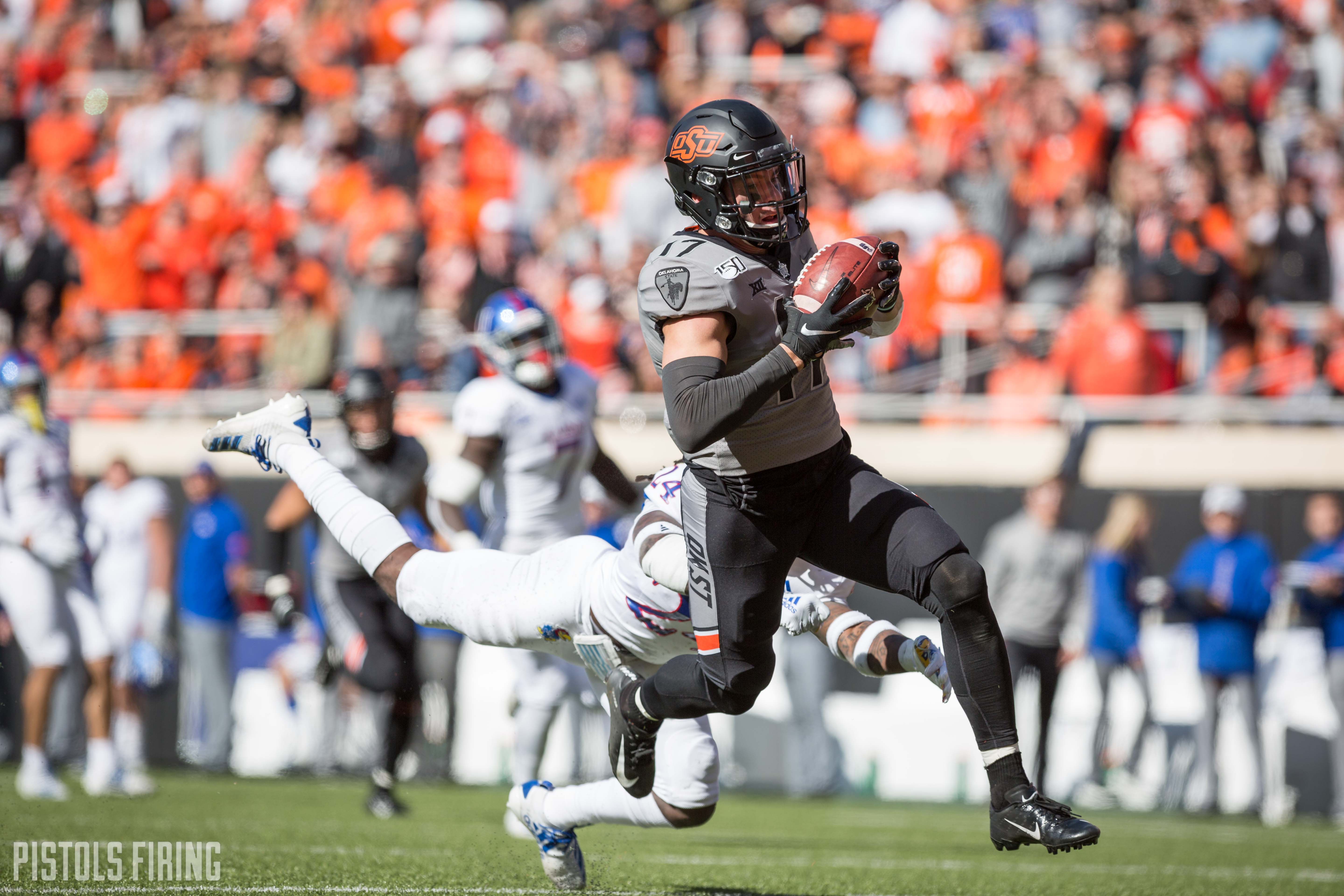 In four years in Stillwater, Dillon Stoner has never been the Cowboys’ No. 1 option. But now that his number has been called, he’s answered the bell.

When OSU lost the Big 12’s leading receiver and a former Biletnikoff finalist in Tylan Wallace, it left a gaping hole in the Cowboys’ offense and looming questions as to how that hole could be filled. The answer, it seems, should have been more obvious.

Since moving to the Z receiver role in place of Tylan, Stoner has been on fire. He followed up a 93-yard, two-score game against TCU with a career-high 150 yards and two more TDs in OSU’s blowout win over Kansas.

“It’s been awesome,” said Mike Gundy after the game. “I said it a couple weeks ago when (Tylan) Wallace went down, he has to play multiple positions, and he’s made plays.”

Make plays, he has.

Moving from primarily playing out of the slot, to a more featured role on the outside may require some adjustment, but it also allows for more chances to take the top off of a defense. And Stoner has shown that he’s up to that task.

Against Kansas, Stoner caught passes of 34, 51 and 43 yards, the latter two ending in paydirt. Against TCU, he had touchdowns of 57 and 22 yards.

“The more you do it, the more comfortable you’ll become,” Stoner said last week in practice. “I’ve had more and more reps at it and that helps a lot every day going out there and working. Especially with Coach Dunn as your coach, he’s gonna make sure that you’re ready to go.”

“He dives for balls in practices. Nobody does that,” said Gundy. “That’s why he has success.”

Stoner has been the Cowboys’ leading receiver and a big-play threat these last two games, and he’s done so without demanding Tylan-like targets. In those two games he’s had 13 balls thrown his way and caught eight of them.

Stoner’s always been a sure-handed receiver, but with more opportunities that efficiency has actually increased. His current catch rate is an impressive 71.7 percent and he’s averaging 10.3 yards per target. If he continues on this pace, he could top his career-high of 603 receiving yards in a single season before Bedlam.

One player can’t make up for the loss of a transcendent talent like Tylan Wallace, but with help from guys like Landon Wolf and Braydon Johnson and the rest of the talent crop of receivers OSU enjoys, Stoner is doing his part, and he’s doing it well.