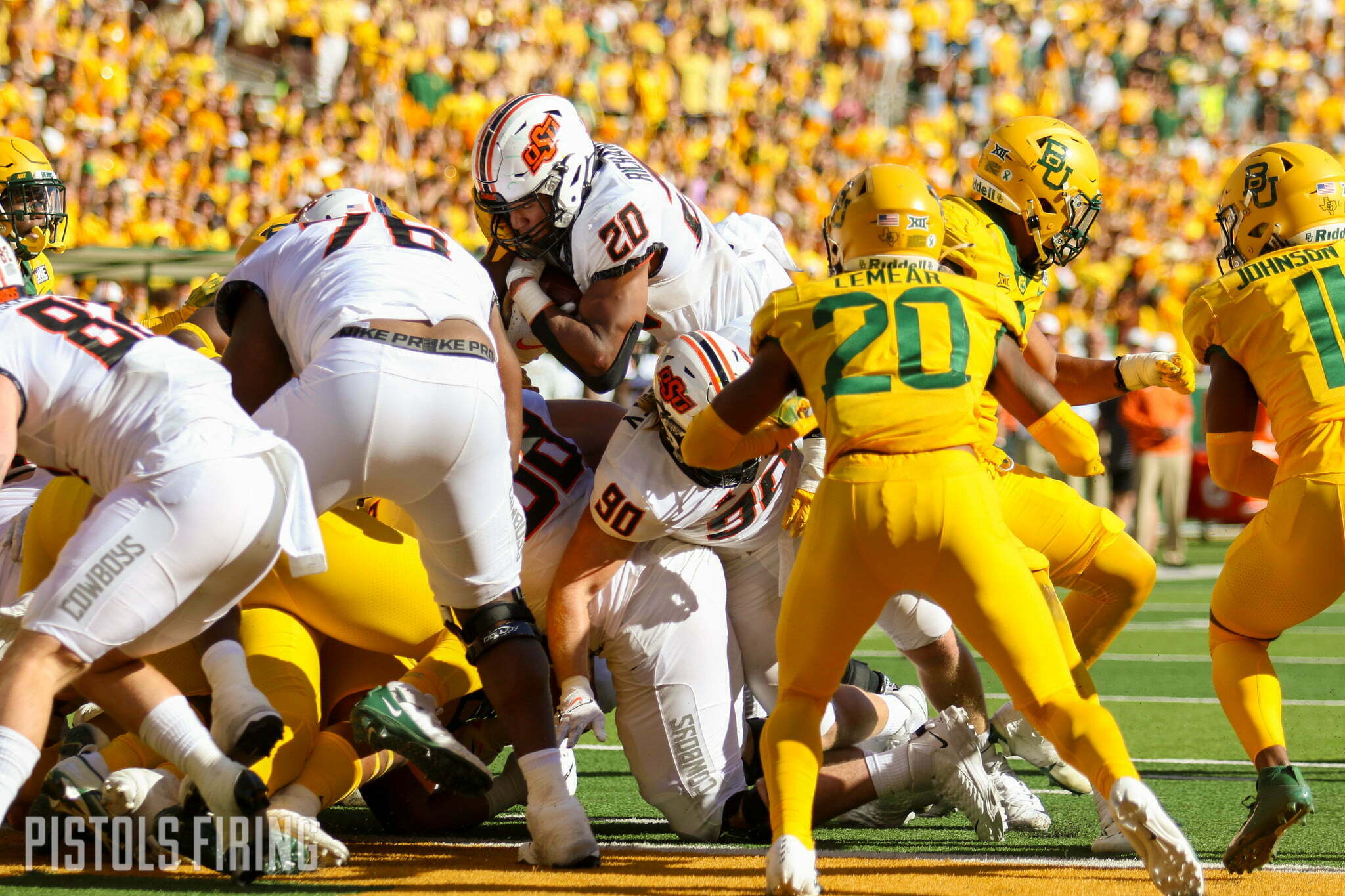 Oklahoma State didn’t win a Big 12 title last year because the Cowboys couldn’t punch it in at the goal line. They haven’t arrived yet in that department, but when the Cowboys needed a couple of yards in Waco on Saturday, they mostly got them.

OSU’s rushing numbers from its Big 12-opening win against Baylor don’t jump off the stat sheet, but the Cowboys ran tough and hard and made the plays they needed to when they needed to make them.

Baylor’s defensive front is still daunting, and it was still fortified in the middle by behemoth Siaki Ika. Even after the OSU loss, Baylor is ranked behind only Alabama in run defense, according to Pro Football Focus. But the Cowboys are healthier along their offensive line than they were last year, and they had Dominic Richardson. And he would not be denied.

The Cowboys’ rushing attack starts with Spencer Sanders, a dual-threat weapon that must be accounted for by every defense OSU faces. He led the Pokes with 75 rushing yards and a score, averaging 5.4 per carry. Richardson’s numbers don’t jump off the page either. He picked up 73 yards and score, averaging three yards per rush.

Sanders made the highlights, and Richardson brought the hammer. And with hard hit after hard hit, he was able to make cracks in the Bears’ defensive front. And then he pushed through them.

Conventional wisdom would dictate that the Cowboys run Richardson outside against such a daunting front — which they did at times — but that’s not been his strength. Richardson never broke loose on that big run that he’s capable of, but he rarely went backward, consistently turning nothing into a little something.

Richardson set a career-high with 27 rush attempts against Arizona State in Week 2. He was just shy of that in Waco with 24. In all of those attempts against that daunting front, Richardson was stopped for no gain only twice, and only once did he lose yardage.

Dunn pointed to those two- and three-yard runs as a key to helping the Cowboys sustain drives and keeping the defense honest, allowing Sanders and the passing game to stay relevant.

“Toughness, toughness,” is how Dunn described Richardson’s outing. “Kid runs downhill. He did exactly what we challenged him to do which is put his pads down, run behind them. Make holes if there weren’t any. Take care of the rock, dive over the pile. He did that on the one big set we had on the goal line, and he just wasn’t denied.”

Richardson had a score in the third quarter when he dove over that Baylor line, a la Barry Sanders. He should have had another one in the second when he ground through the Baylor scrum over the goal line but was called short.

When OSU and Baylor squared off in Arlington last December, the Cowboys mustered just 66 rushing yards on 1.7 yards per carry. That was the worst average for an OSU team since 2014 when the Pokes could barely field a starting O-line unit. On Saturday, the Cowboys outrushed the Bears (166-112) and doubled that per-attempt number at 3.6.

Previously, Mike Gundy had set the bar for his offense at a 4.5-yard average, but after the Cowboys’ win on Saturday, he adjusted it down a tad.

“If we go for 4.1ish, the way that defenses are playing now, I’m gonna buy that,” said Gundy. “[Baylor’s] front is good. They just are because we have to know where [Siaki Ika] is. Can’t just go in a game and come out of a game and say he just kicked our butt. We’d be like, ‘That’s not very smart. We knew he was gonna kick our butt.’ So we had to adjust some things we do to help our offense, and we did it. But it’s not the easiest thing to do.”

Dunn was quick to state that the Cowboys’ rushing attack had not arrived, but that he was encouraged by what he saw.

“It was better. It was better. We’re certainly not there,” said Dunn. “But I know this: to be able to make some plays against that defensive front gives me a lot of confidence moving forward through the rest of the conference.”