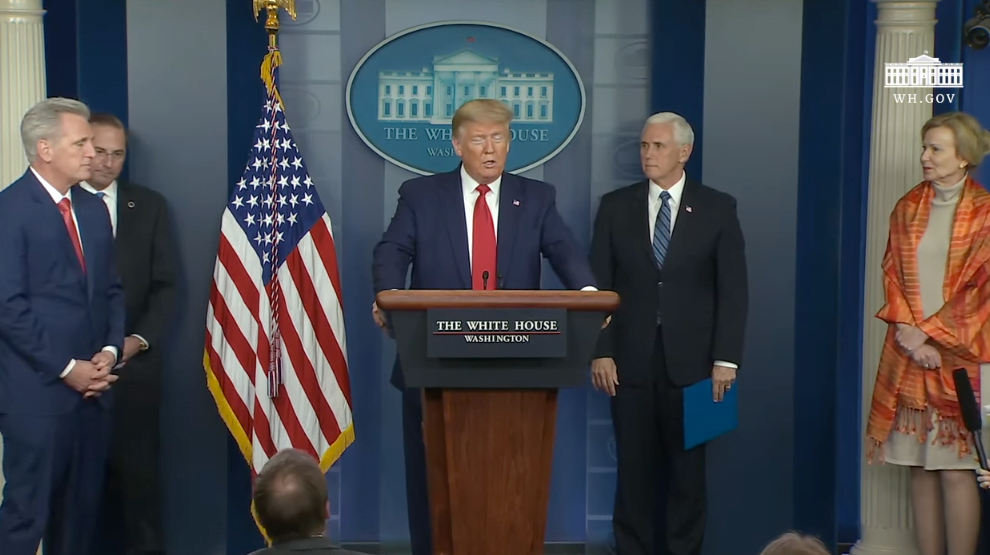 President Donald Trump said Saturday in a conference call with a number of commissioners in the sports realm that he believes the NFL season will start on time in September, according to ESPN, an expression of optimism that could portend positively for the 2020 college football season. In a briefing at the White House later in the day he doubled down on his belief, saying he wants sports to return as quickly as possible.

“I want fans back in the arenas,” Trump said. “I think it’s whenever we’re ready. As soon as we can, obviously. And the fans want to be back, too. They want to see basketball and baseball and football and hockey. They want to see their sports. They want to go out onto the golf courses and breathe nice, clean, beautiful fresh air.”

Trump’s optimism wasn’t met with universal agreement among health experts and politicians, though. California Governor Gavin Newsom said in response to Trump that he does not expect sports leagues to be up and running by September on Saturday. Dr. Dena Grayson, an expert who helped develop an antiviral drug for Ebola and who specializes in viral diseases, pushed back on the idea entirely.

“People will die if this happens,” she posted on Twitter.

Whether a September return for the NFL is feasible or not, what’s clear right now is that a timeline of any sorts should be murky at best. Dr. Anthony Fauci, the Director of the National Institute of Allergy and Infectious Disease, who is leading the coronavirus task force, made as much clear two weeks ago in an appearance on CNN.

Most of Oklahoma State’s student-athletes — including football — are at home taking classes online. And for OSU football athletes specifically, this means they’re unable to participate in finishing off spring football. The NCAA has not set any timelines on potential return dates, though it recently extended the dead period in recruiting through the end of next month.

If football does return by September, it’d be right on time for OSU. Fall training camp usually starts the first of August, and OSU’s first game is scheduled for September 3 in Stillwater against Oregon State.