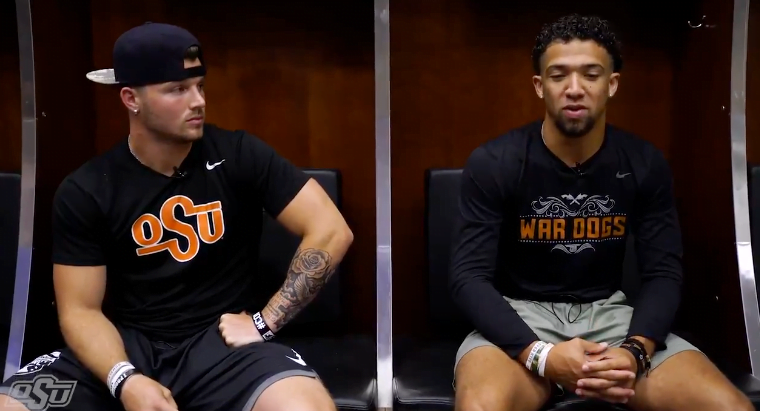 After not hearing from either Dru Brown or Spencer Sanders since their arrival last offseason, both have been given the mic to talk for the first time this week. And man, do they know how to fan the flames.

The two spoke on camera together in a video released by OSU on Sunday, and man, they’re both each other’s hype man. First, there’s this, from Sanders on Brown:

Then, there’s this from Dru on Sanders, returning the hype and then pumping it to a new level:

“If I were to compare him to anyone, it would probably be Aaron Rodgers. The athletic ability, he can stay in the pocket, he can make the throws, he’s got a strong arm.”

No matter who goes out there, we are going to be proud of each other. @SpenceSanders @dbrownTNDO#GoPokes #okstate pic.twitter.com/7Ts2gH1rLu

That is … a bit much! Neither has won the job, but both seem pretty comfortable just casually comparing the other to NFL Hall of Fame talents. Talk about hype!

The cool thing, though, is that this all seems really organic. This isn’t forced. Dru seems like a real Sanders fan, and vice versa. It could all be lip service, of course, but the genuine excitement and vibe here is one of adoration and respect. As we look ahead to the 2019 season, with neither having outright won the job (yet!), that would seem to bode well regardless of the outcome of the ongoing quarterback battle.

“I believe we’re both great quarterbacks,” said Sanders. “Whoever plays, we’ve both got a great opportunity here. We’ve built a bond together, and we don’t hate each other.”