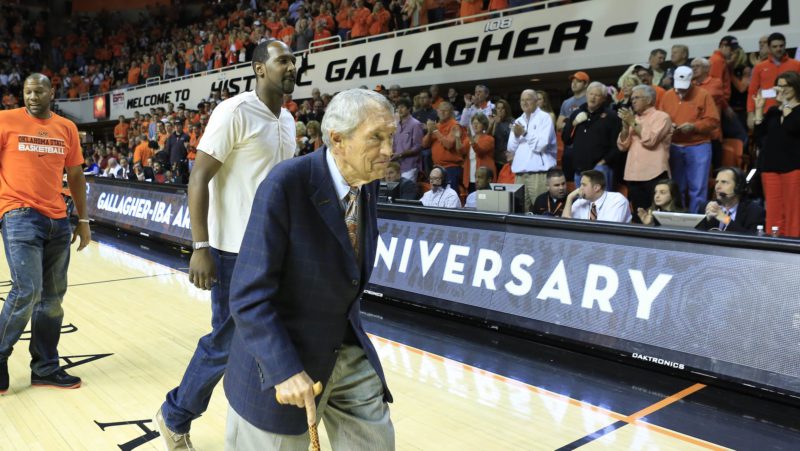 The rowdy was back in Gallagher-Iba Arena last Saturday night. It must have jogged a memory or two for Eddie Sutton as he sat next to the court that bears his name.

He doesn’t get around so well now. Ailing back issues and age itself have reserved Eddie to a wheelchair. Before he made his way to his seat, he knew he wouldn’t be making a trip to Massachusetts later this year. The finalists for this year’s Naismith Memorial Basketball Hall of Fame were announced Saturday afternoon.

Once again, Eddie Sutton did not make the cut.

Michael Wilson was born in McAlester, Oklahoma. You may have never heard the name. Most haven’t. But he wrote some of the greatest movie scripts in American cinematic history. Titles like Lawrence of Arabia, The Bridge on the River Kwai, and even the original Planet of the Apes were among his 20-plus works spanning his 20-year career.

Wilson never gained the proper recognition for his work. In the age of McCarthyism, Wilson was one of hundreds of Hollywood writers, actors and crew members that were blacklisted for their perceived subversive political views. He, like many others, had to write using pseudonyms and for less pay. Even when The Bridge on the River Kwai won an Academy award for best screenplay, the honor went to Pierre Boulle who wrote the book the screenplay was adapted from.

Why the history lesson? Sutton, like Wilson seems to have been blacklisted.

Doug Gottlieb wrote an open letter to the committee a year ago laying out the case for his former head coach’s enshrinement. It’s another one from Doug that — unfortunately — has become an annual must-read.

Let’s look at how Mr. Sutton matches up with this year’s finalists.

Eddie Sutton’s 806 career wins ranks him No. 7, tied with Roy Williams at the time of this writing. We can assume William’s Tar Heels aren’t finished winning in 2017. But even at No. 8, Sutton is the only 800-win coach to not be honored in Springfield, Massachusetts — including Williams who was enshrined ten years ago.

Included in the list of finalists was former OSU player and assistant under Sutton, Bill Self. Sidney Moncrief who played for Sutton at Arkansas is also on the list.

Of the three NCAA men’s basketball coaches that were listed as finalists, there are none that I could make a huge case to be excluded. Rollie Massimino has coached for almost 50 years and although his Div. I wins total sits at 481, his total collegiate wins number over 800. And Massismino won a national championship in 1985 with Villanova.

Same goes with Bo Ryan — whose career record is 747-223. But he, like Sutton, never won an NCAA title and he had fewer Final Four appearances (two) than Eddie’s (three).

Then we have Bill Self. Hard to argue with his name ending up on a plaque. Aside from his gaudy Big 12 accolades, he boasts a .763 career win percentage (613-190) and his own national championship.

If it’s not wins. If it’s not rings. Then what is it? Sutton’s career had some scars, no doubt.

There was his dismissal from Kentucky over alleged recruiting violations. Then there was the unceremonious exit from his own alma mater stemming from his own fight with alcohol. But, as Doug pointed out in his letter, a few bumps in the road didn’t keep out some other coaching greats.

After his second Bedlam win in as many tries, OSU’s new head coach Brad Underwood opened up about Sutton and what having him there meant.

“You don’t do what he’s done at so many different places. He’s one of the reasons … you want to come to a place like this. You can’t re-create overnight what he did here. With Mr. Iba … it makes this a special place.”

Michael Wilson’s story ended in 1984 when he and fellow writer Carl Foreman were rightfully honored with their Academy award — nearly 30 years later. Unfortunately for Wilson and his family the correction came too late. He had died six years earlier.

One more year has passed and Sutton, who will be 81 next month, waits. When the Hall-of-Fame committee finally gets this one right will it also be too late?