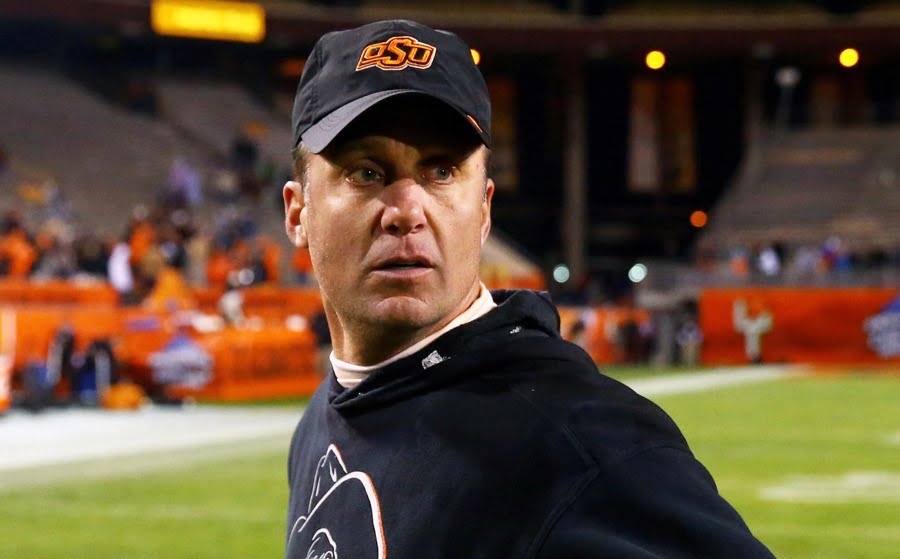 OSU was fined less than one day’s worth of Mike Gundy’s salary. (USATSI)

The pseudo-scandal Sports Illustrated presented nearly two years (!) ago finally came to a close on Friday afternoon as the NCAA passed down penalties to the Pokes.

• A reduction in the number of evaluation days by 10 days in the fall and spring during the 2015-16 year.

• The school and football program may not use the Orange Pride program, and may not organize another student group to assist in recruiting prospects for four years.

Yep, that’s it. It doesn’t even appear that these were Level II penalties.

Not sure the NCAA sanctions at Oklahoma State even rise to the level of a wrist slap.

An athletic department funded by Boone Pickens was fined $8,500.

Official visits being limited to 30 will have minimal impact. By my count since 2010 OSU has hosted a total of 30 officials three times.

Probation is a dirty word but it means nothing more than that your penalties will be exponentially higher than they would have otherwise been if you get caught doing something wrong during that year.

There is no postseason ban.

This is the big-time sentence from the NCAA’s release:

While decisions made by athletics staff in this case resulted in NCAA violations, the panel did not find that the university failed to monitor its football program.

Finally, I do think this is the most serious thing to come of everything and it’s something that, from the beginning, has been the biggest issue.

It seems odd the NCAA is giving OK State almost a free pass for failing to uphold its own drug testing policy. To me, that's a serious issue

It’s something that OSU itself admitted in a self-investigation. And the 16-page report reveals some interesting stuff.

Mike Gundy said in the spring of 2013 that he’s pretty liberal when it comes to suspending players for drug usage.

Gundy also discussed his thoughts on tightening things up at the end of 2014.

“While I am pleased, but not surprised, that the claims in Sports Illustrated were fundamentally unfounded, we continue to work with the athletics administration to ensure a clear understanding and application of our policies,” said Gundy.

So good job, Sports Illustrated. You got Orange Pride expelled from the program and cost Boone Pickens a dinner. You also brought a bunch of OSU writers all of the pageviews so, really, thank you.