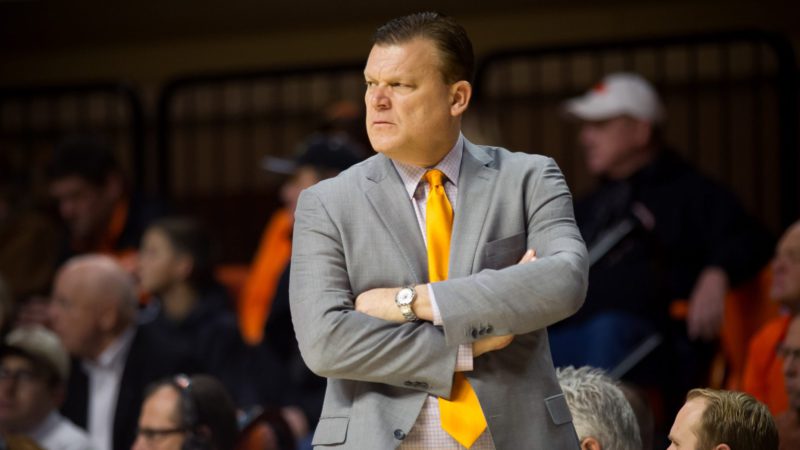 After a statement thumping of Wichita State (in Wichita) and a rout of Texas A&M-Corpus Christi, Brad Underwood and his Cowboys stare their Big 12 opener right in the face. Underwood has Oklahoma State’s basketball program on an upward trend and its fan base brimming with optimism. And for good reason.

The Cowboys are back to playing a fun style of basketball that’s predicated on swarming defense (third nationally in turnover percentage, at 26.1) and a fast-paced motion offense. Underwood, as was recently pointed out on our pod, has a plan.

That was the complaint of many an OSU fan as they laboriously slaved over a Travis Ford-coached team, year after year. Eight years can do a lot to a man. Leave him biased, quite possibly jaded. But now, with a lungful of fresh Undie-ball air, we can try to take an honest look at the beginning of each coach’s OSU legacy.

After the unceremonious exit of Sean Sutton in 2008, Mike Holder rolled the dice on a young head coach from UMass. Travis Ford took over a veteran-filled unit with a sophomore star (in the making) in James Anderson. That team was ranked 138th in experience nationally. Underwood takes over a much younger squad (293rd in experience) but with an established star sophomore (Evans) and a group of emerging freshmen.

Let’s see how the the two teams compare in their first twelve games.

Brad Underwood’s Cowboys are sporting a 10-2 record with losses to No. 9 North Carolina and a good Maryland team on the road. They’re 6-0 at Gallagher-Iba Arena and last week (for the first time) received AP top 25 votes. Their Big 12 season opener against West Virginia is at home this Friday.

At the same point in Travis Ford’s tenure, his team was 9-3 with losses to 9th-ranked Gonzaga and 5th-ranked Michigan State (both on a neutral court) and a loss on the road at Washington. The Cowboys were 5-0 at GIA and also unranked.

Here’s where the differences come into focus. This year’s team is averaging 103 points (92.6 without Div II. opponents) per game. Through twelve games, Ford’s team was averaging 83.2 points per game.

This year’s team plays with more tempo, but also with more purpose. There is a confidence, a swagger even and a big part of that comes from the Freshman Five and the competition their arrival seems to have spurned.

In terms of competition thus far, the teams are pretty even. The 2008-09 team ranked 91st in non-conference strength of schedule for the year. This year’s team is currently ranked 138th (was 90th last week).

It’s yet to be seen how Underwood’s inaugural campaign will end, regardless of the optimism. Ford’s first year amounted to a 23-12 record and a second-round loss to Pittsburgh in March. Interestingly, that would be the deepest his team ever got into March.

What is the 2016-17 squad’s ceiling? It would be hard to put it much higher than what Ford accomplished his first year (which would be good for a head coach in his first year of a rebuild without any Power-5 experience). But this team looks different than those teams we’ve seen before. It doesn’t look like Ford’s teams. It doesn’t look like Eddie’s. It looks like Underwood’s. And that just might turn out to be a great thing.