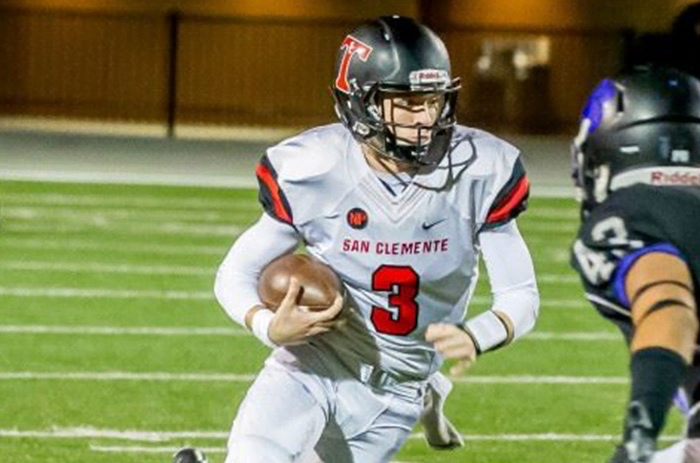 After the 2019 early signing period concluded on December 21st, there was one very intriguing Oklahoma State recruit I wanted to discuss in more detail as we head into the offseason. That one recruit is three-star quarterback Brendan Costello.

Costello committed to the Cowboys last summer, and even after an offer from Georgia in October and continued interest from UCLA, the California-product held steady in his commitment to OSU and eventually signed with the Pokes on December 19th.

He finished his senior year for the San Clemente Tritons with 2,328 passing yards on 264 attempts (63.3 percent completion percentage), 22 touchdowns and only 5 interceptions. In addition, the dual-threat recruit had 658 rushing yards, along with 9 touchdowns on the ground. All of this was accumulated over a 12-game span.

After providing Costello’s background and stats above, I wanted to conduct a scouting breakdown on the young quarterback to discuss in detail what he can bring to this Oklahoma State football team. I’ve watched most of his highlight reels, but I was also able to review some full game tapes from Costello’s senior season, allowing me to further evaluate him.

Costello lined up almost exclusively in the shotgun at San Clemente high school, so I wanted to provide some context on the footwork a quarterback uses out of shotgun formations. This picture below is from Dub Maddox’s book, Adapt or Die: Advancements to Accelerate Execution in Football’s Modern Passing Game (great book by the way), showing some of the footwork on shotgun dropbacks. 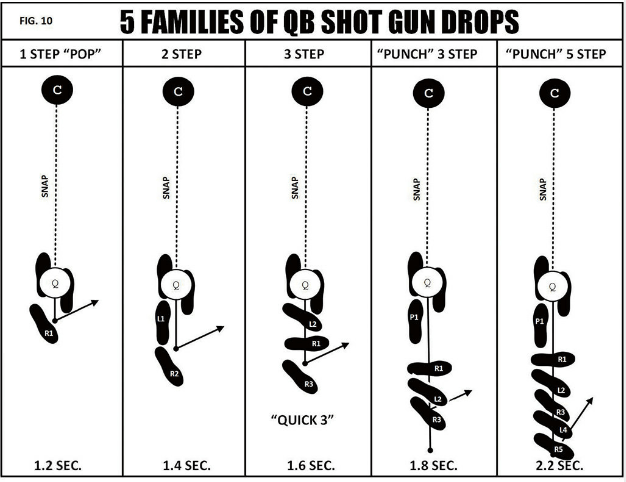 Overall, I thought Costello’s footwork was pretty good. There were times when he took a few extra steps at the beginning of his drop, but he looked very fluid and comfortable setting up to the throw the football, as you can see below.

San Clemente’s offense mostly revolved around Costello getting the ball out of his hands quickly to his primary read, as they had several playmakers on the outside. I noticed that this caused him to turn his shoulders to where he was going to throw the football before beginning his drop.

This caused him to telegraph where he was going with the football a few seconds before he threw it, allowing the defense to know where his is going very early on in the play.

You would prefer he didn’t point his shoulders until he completes the steps in his drop. This being said, his footwork looks good overall and he has a solid foundation to build upon at the next level.

Next, using the image below, I’ll walk through Costello’s throwing mechanics.

Costello does a great job of establishing his foundation at the end of his drop. He’s standing tall, has a slight bend in his knee putting him in a good athletic stance, his feet are shoulder width apart and he has his weight slightly on his back foot. 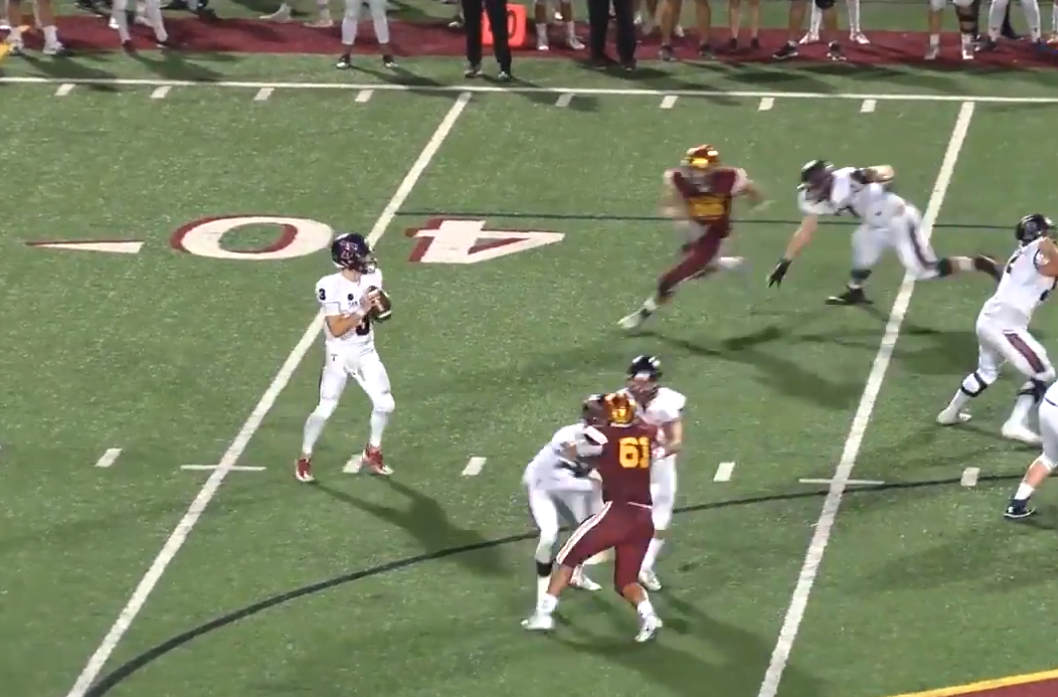 You can also see that he has the football in a good “triangle” position, with both hands on the ball, elbows level and the ball above his waist in his upper chest area.

This position allows him to increase the speed and power of his release, while protecting the football by keeping it in a secure position. Some coaches teach that the ball should be held closer to the back shoulder, but as long as he has the ball in the upper chest region and he feels comfortable, that’s all that matters.

When Costello gets ready to throw the football, he brings the ball down and loops it around before throwing it.

You would preferably want a quarterback to bring the ball straight back and then come forward to optimize release time, looking something like this.

However, Costello’s motion is still incredibly quick and a lot of successful quarterbacks have a similar looping motion (like Drew Brees shown below).

And, as long as he’s not going full Tebow… I think he’s fine. 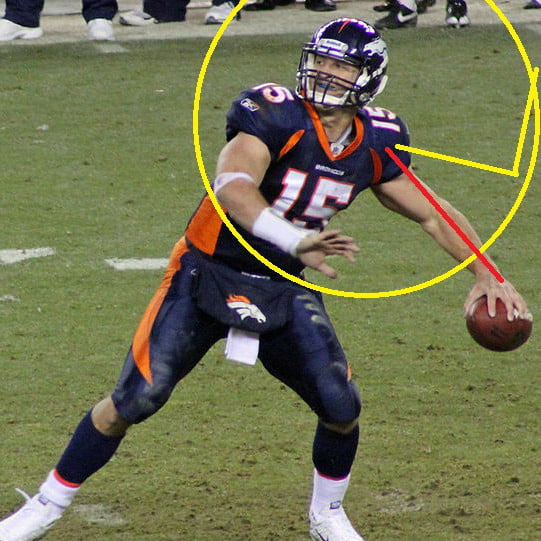 Costello also does an excellent job of “elevating to zero”.

“The ‘Zero’ position places the elbow 6 inches ahead of the shoulder, 45 degrees up and out.  ‘Zero’ position is the orthopedic term given to this position because the rotator cuff muscles are neutral with no strain on them – that is, it’s the optimal position prior to the release because it minimizes strain on the joints and muscles involved in football throwing mechanics.” [FootballUniversity.org] 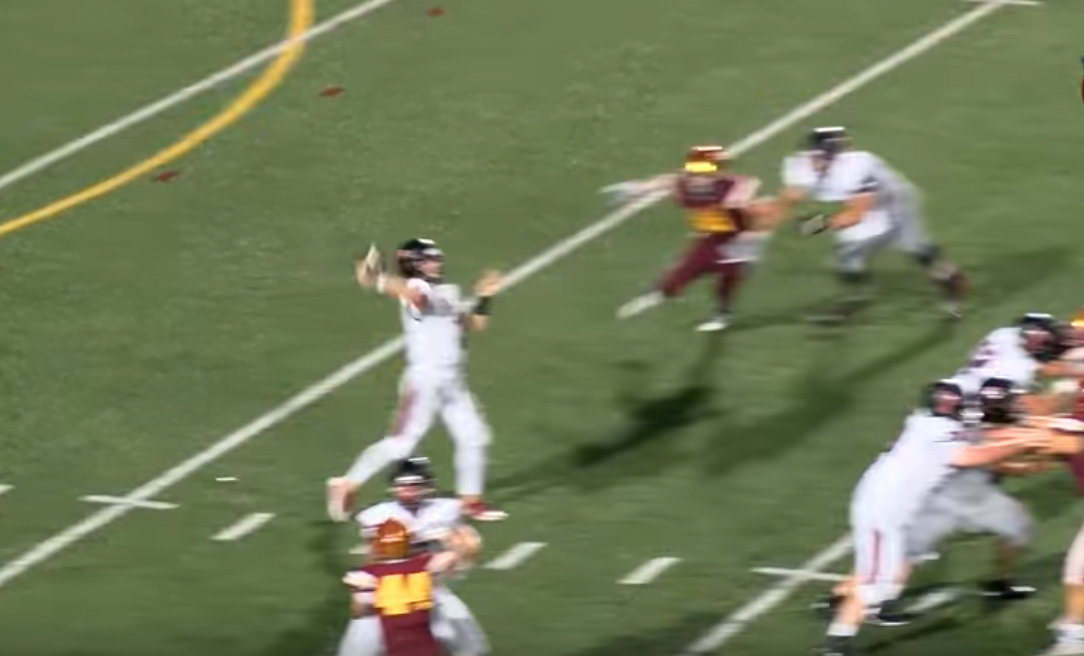 He then completed his throwing motion by extending his arm through the release and using his lower body for overall power to finish the throw.

I’ll look at some more of his film tomorrow and break down the rest of it.