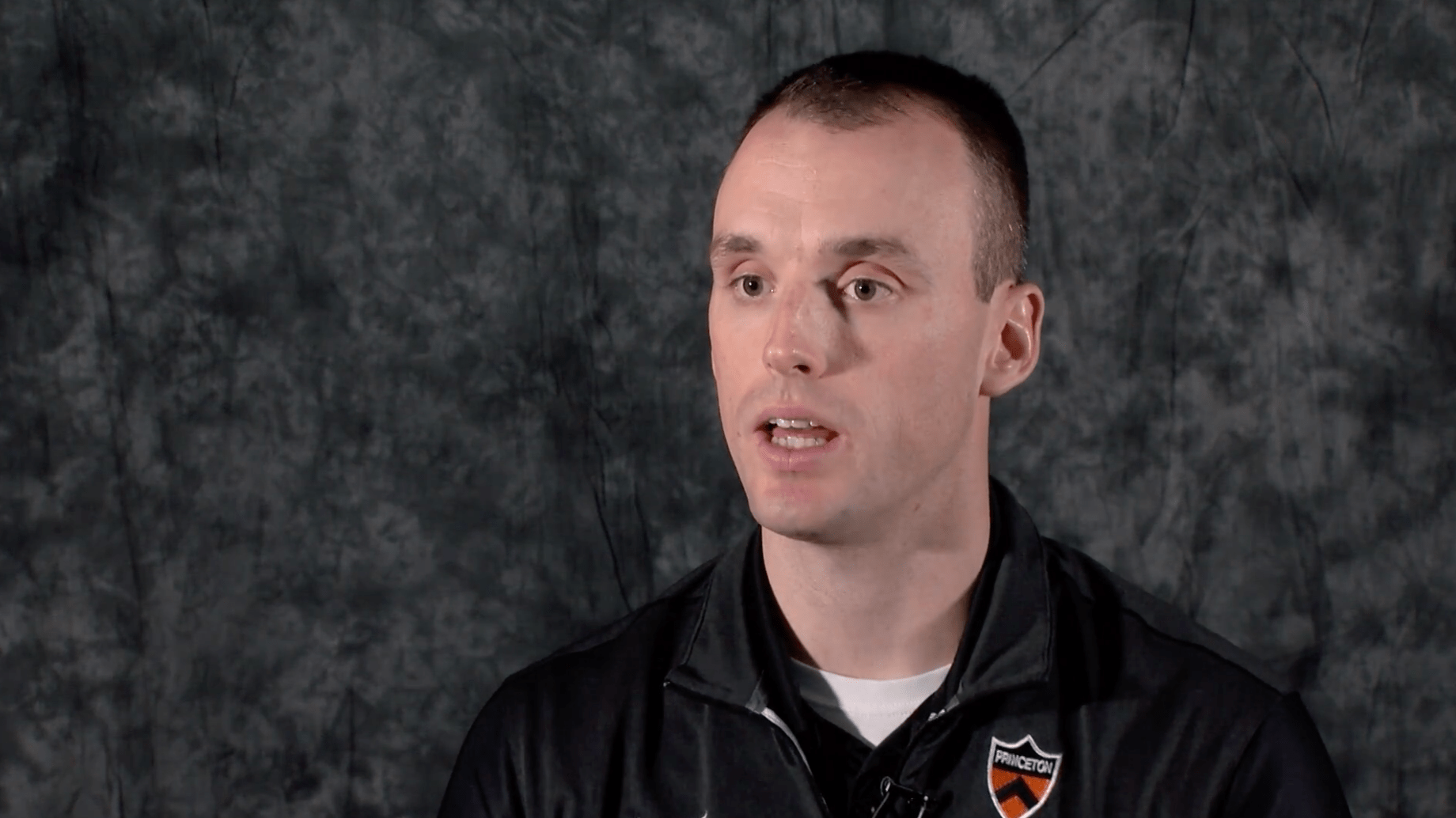 Yesterday, I began my series breaking down Oklahoma State’s new offensive coordinator Sean Gleeson. In Part 1, I covered the basics of Gleeson’s scheme and the personnel he used during his two seasons calling plays at Princeton. Now for Part 2, I will dive into what the former Ivy League OC likes to do in the running game.

To provide some context, the Cowboys have primarily run inside and outside zone, counters, power, draws and some pin and pull schemes under Mike Yurcich. Additionally, they mixed in the quarterback running game last season with Taylor Cornelius. Below you’ll see that Gleeson uses a lot of these same concepts but he adds his own creative wrinkles into the mix. You’ll also see some new formations and blocking schemes Gleeson likes to run that we haven’t typically seen out of Yurcich-led offenses.

Below I will list out the primary running concepts Gleeson utilized the past seasons at Princeton and provide some details and video clips covering each concept.

Power is something Oklahoma State teams in recent years are familiar with. Power normally involves a lineman pulling around to the play side to lead block through the hole. This is different from a zone run in that the offense’s point of attack is predetermined and the running back is not looking to cut back and find the open space. Below you’ll see Princeton run Power with the back-side guard pulling and the H-back performing a kick out to create a hole for the running back.

Gleeson will also run the Power Read, which can also be referred to as Inverted Veer. The blocking scheme is similar to the Power run shown above with the back-side guard pulling, but this time the quarterback is reading the defense and is making a decision to keep the ball inside or hand it off the running back to the outside. You can see an example below, although the Tiger quarterback ends up busting this outside anyway.

I get really excited picturing Dru Brown or Spencer Sanders running this with Chuba Hubbard. We saw a variation of this in some goal-line sets with J.W. Walsh, but I think guys like Brown and Sanders will flourish running this play out of Gleeson’s formations.

The Buck Sweep is something we didn’t really see from the Pokes under Yurcich. This play consists of both the back-side and play-side guard pulling around the outside to attack the edge of the defense. This is similar to Power, but the point of attack is now set to the perimeter. See the image below for the basics. 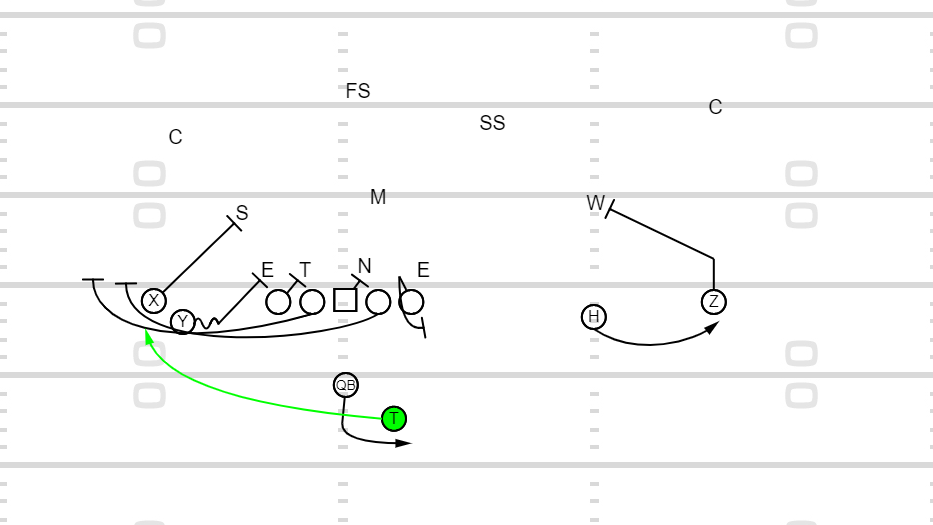 Below you see the Tigers run the Buck Sweep for their running back.

Gleeson will also run it with the quarterback and running back’s roles reversed from the clip above, as you will see in the following video.

The Buck Sweep looks to exploit a numbers advantage on the perimeter and give the ball carrier an outside running lane. If you can get someone with Chuba Hubbard’s speed around the corner with two pulling lead blockers, the odds are probably going to be in your favor.

The Bash running concept stands for “Back Away”. The quarterback and the running back (or wide receiver in jet sweep motion), switch responsibilities. The QB will follow the primary run blocking, and the RB/WR will run away from the blocking around the outside.

In the clip shown in the Buck Sweep section above, you can see the running back is carrying out a bash concept to the other side of the play, see the image below. The quarterback will read the back-side defensive end and decide whether to give it to the running back or keep it himself. 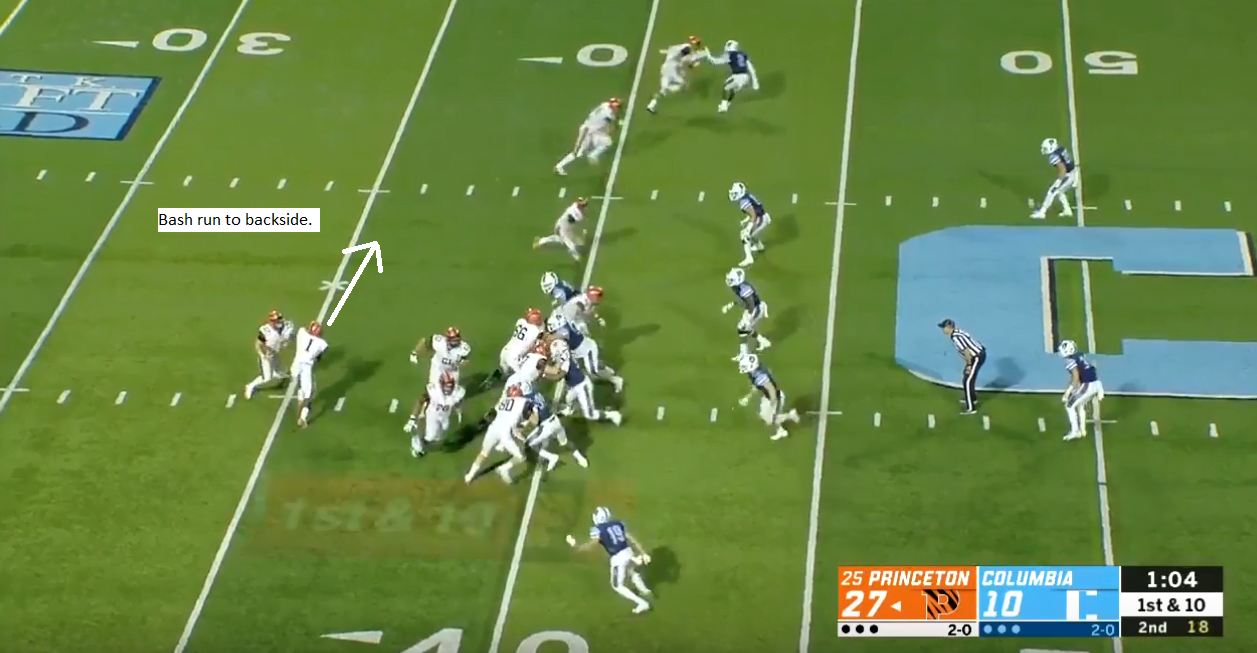 Coach Dan Casey shows another example of this play from Princeton in this tweet.

Next, you see Bash run with the jet motion receiver. This video is from 2016, so Gleeson wasn’t calling plays, but this run is in his arsenal and may show up in the Oklahoma State playbook in the future. The offensive line blocks the zone run for the Tiger quarterback, the QB reads the defense and gives it to the motion man going to the back-side of the play.

The Bash concept is used to attack defenses who are playing over aggressively, or just to catch a defense off guard with the role reversal.

We’ve seen the GT Counter, or guard/tackle counter, become prevalent in Big 12 running schemes in recent years. The basic blocking concept is shown below, with the back-side guard and tackle pulling around the end. 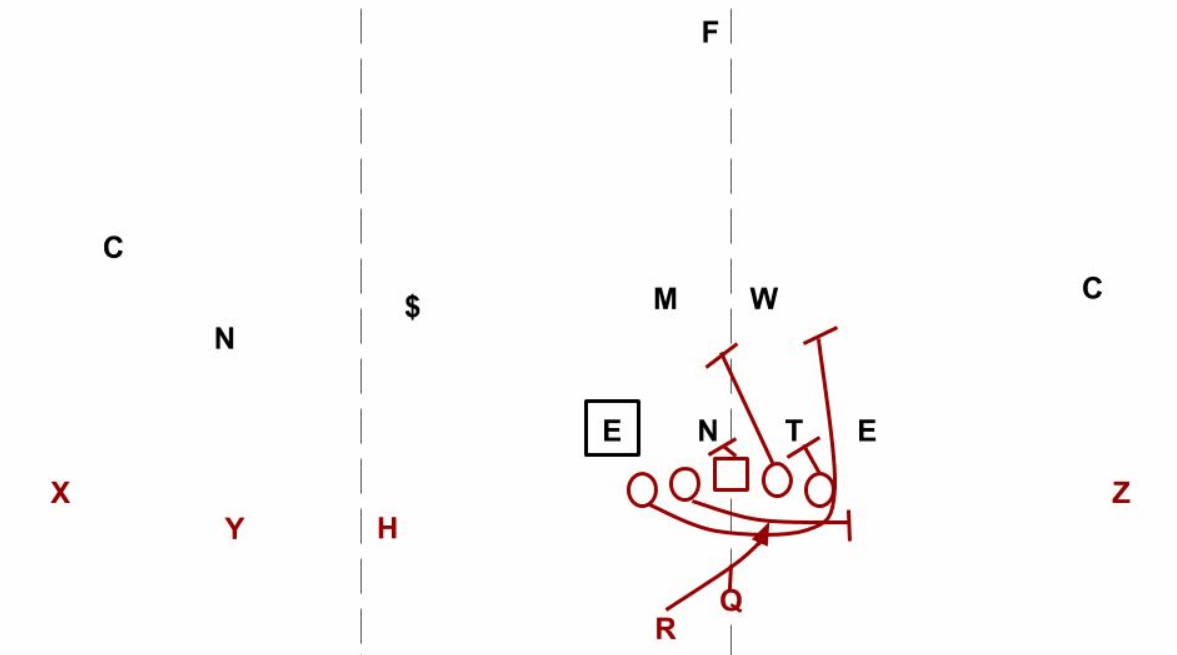 Well, Gleeson utilizes this concept, but also uses many variations and different pulling linemen in his counter runs. This was something the guys on the Tape Doesn’t Lie podcast hit on in their most recent episode.

Gleeson utilized the GT counter, tight end and guard counter, and a couple of other variations of pulling linemen on his counter runs.

In addition, Princeton’s offense used a lot of pin and pull blocking schemes. This means that if there is a defender lined up directly in front of an offensive lineman or shaded to that offensive lineman’s inside shoulder, that particular lineman will “pin”, meaning he would block that defender. If an offensive lineman is uncovered, then he would pull. This creates additional gaps that the defense isn’t always prepared for, see an example in the clip below.

As you can see, Gleeson brings in a variety of running concepts which the Cowboys currently haven’t utilized very frequently in the past, if at all. It may take some time for Oklahoma State’s offensive linemen to get used to these blocking schemes, especially the pulling, but Gleeson has shown the ability to adapt to his personnel during his two season as OC. Additionally, Gleeson runs zone/zone read quite often, but I mainly left this out of the videos above as these runs are primary running concepts in Yurcich’s scheme.

I’m really excited about the different running schemes he is bringing to the playbook and look forward to seeing how much of what I’ve seen in Princeton’s film is used next season.