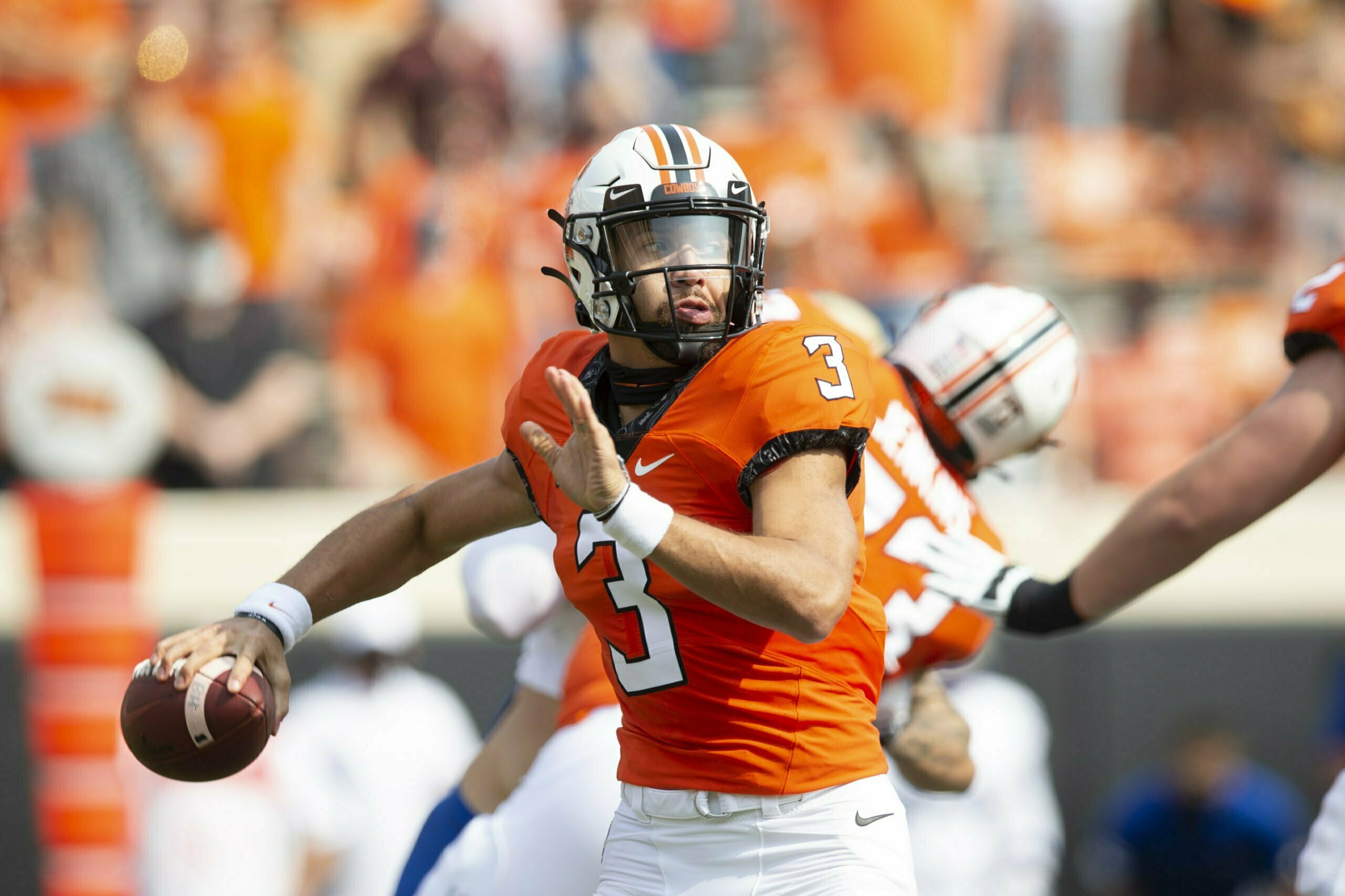 Today, I’ll dive into Part 3 of my three-part series breaking down Spencer Sanders’ 2020 interceptions. In this post we will cover the picks that I categorized as “The Ugly.” As a reminder, we took a look at “The Good (as an Interception Can Be)” in Part 1 and “The Bad” in Part 2. Now, the Part 3 interceptions fall almost entirely on Sanders’ shoulders. These are the types of plays he can’t make and has to improve upon moving forward.

We’ll start off with Sanders lone interception from the Texas game last season.

The Cowboys are in an 11-personnel set, with the Cowboy Back in the H-back position on the left side of OSU’s formation. On the two-receiver side, Dillon Stoner motions from outside receiver to inside receiver just before the snap. Sanders takes the snap and drops back to pass as the offensive line sets up to pass protect.

On the other side of the ball, the Longhorn cornerback on the two-receiver side is playing off coverage. The corner to the single receiver starts in tight coverage, but sags off prior to the snap. This tells Sanders that UT is most likely in zone coverage. As Sanders takes his drop, Texas looks to be in some form of Cover 3, or a three-deep zone coverage.

Sanders knows he wants to go the single-receiver side, especially with the corner bailing out into a deep zone on that side of the field. The corner also has his hips rotated inside, which sets up Sanders’ throw nicely as the receiver is running an outward-breaking route toward the sideline. The corner will most likely be out of position as the wideout makes his break.

Sanders has decent timing here on his throw, but this may be the worst thrown ball out of all the interceptions I’ve broken down in this series so far (because the one later on in this post in worse). The one spot he doesn’t want to throw this ball is behind the receiver, as that is exactly where the defensive back will be as I explained above. However, this also falls on wideout Dee Anderson as well, as he runs an incredibly sloppy route. The full video can be found below.

OSU has third-and-10, up by only 4 points over TTU in the third quarter. They decide to utilize a 12-personnel formation, with one Cowboy Back split as the inside receiver to the field, or wide side, and one Cowboy Back in the backfield to Sanders’ left. I don’t love the 12-personnel formations on third-and-long, as I personally would rather have another wide receiver on the field, but this is what the Pokes decided to roll with here.

The Cowboy offensive line, the Cowboy Back lined up in the backfield and the running back all stay in to pass protect for Sanders. Cowboy Back Jelani Woods, who was split out as a receiver, runs a short route over the middle while both outside receivers take off down the field. Sanders is forced to move out of the pocket due to pressure up the middle from the Red Raider defensive line. As he moves outside of the pocket, TTU brings additional pressure from the second level, and Sanders decides to make a throw, while falling backward, into double coverage.

As you could’ve guessed … this did not work out well. Now, Sanders didn’t get a lot of help from his blockers, but in a tight game like this, he has to know to throw this ball away. I realize it’s third down, but giving the ball back to TTU with great field position is just something you can’t do in this spot. The full play is shown in the following clip.

After looking back at Sanders’ picks from last year, my main takeaway is that some weren’t as bad as I had initially thought during live action. The two above obviously aren’t great, but the throws in Part 1 and 2 weren’t terrible, and I feel that Sanders decision-making was normally pretty good. I’m excited to see how much he has improved as he takes the field this upcoming season, and I think we are going to see a great year from OSU’s QB1.