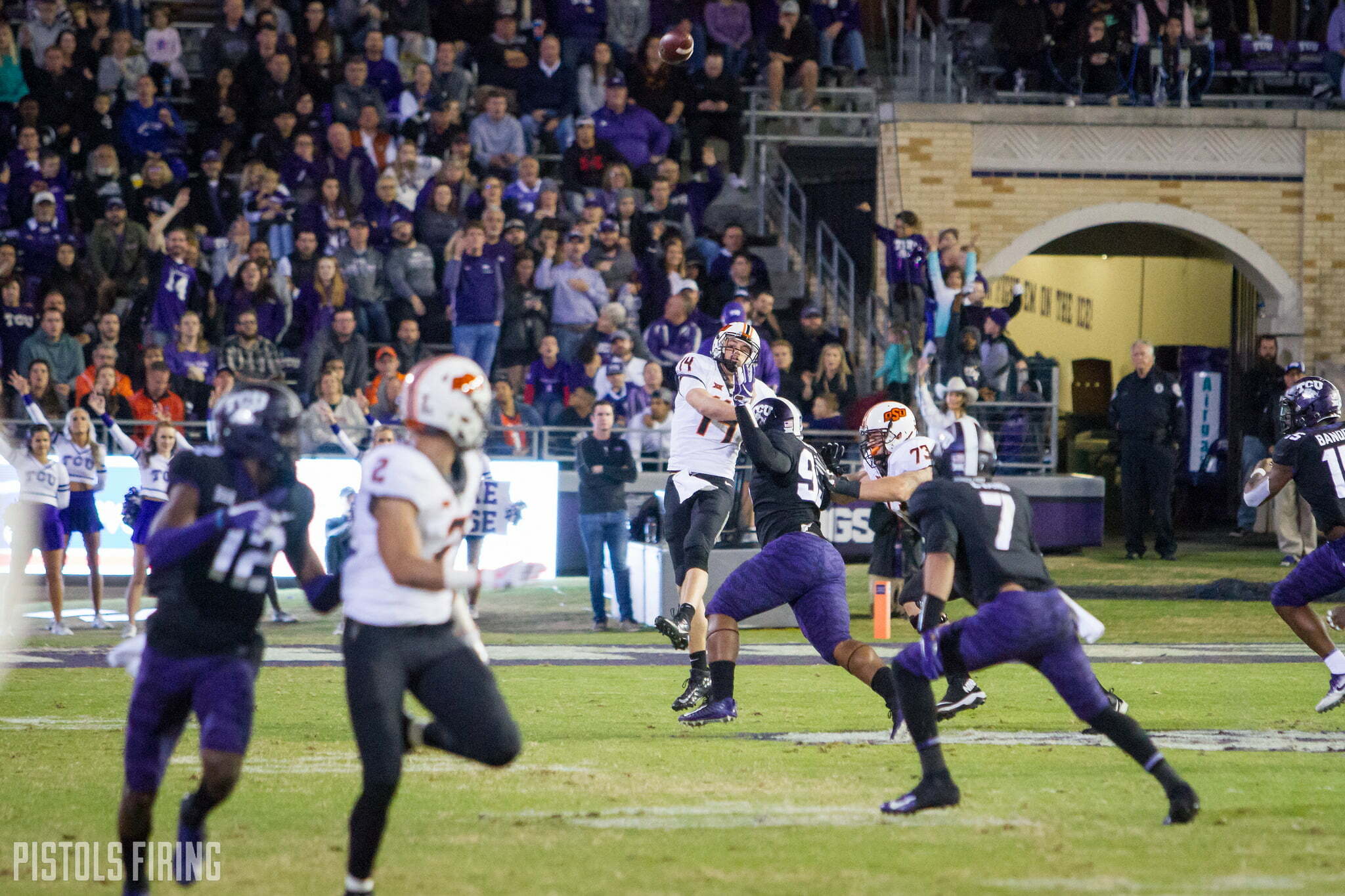 It was clear what Oklahoma State’s game plan was very early on in Saturday’s matchup with TCU. Based on the success they saw in the second half against West Virginia on plays like the one shown below.

In addition to last week, they were good against TCU last season in exploiting coverage matchups like what’s shown in the following clip.

On Saturday the Cowboys were going to try and spread the Horned Frog defense out with 10 personnel (one running back and no tight ends or Cowboy Backs) and gain numbers advantages in the run game and exploit coverage mismatches in the passing game.

As you can see in the film breakdown below from 365 Schemes, it hasn’t just been OSU that’s been able to hurt TCU with trips formations in the past.

However, due to a combination of poor decision-making from Taylor Cornelius, drops from receivers, inaccurate passes, subpar blocking at times, virtually no running game and overall solid defensive scheme from TCU, the Cowboys just weren’t able to find the success they expected with this game plan.

In addition, Oklahoma State lacked the creativity we’ve seen from them at times this season. Out of their 72 total plays, I counted only four instances of the fly sweep motion being utilized. However, when they did use this motion, they were able to find some success.

One of these four plays was the touchdown pass to Tyron Johnson which was called back due to a Tylan Wallace penalty. The fly sweep motion from Dillon Stoner causes the TCU strong safety to account for the throw out to the flat. 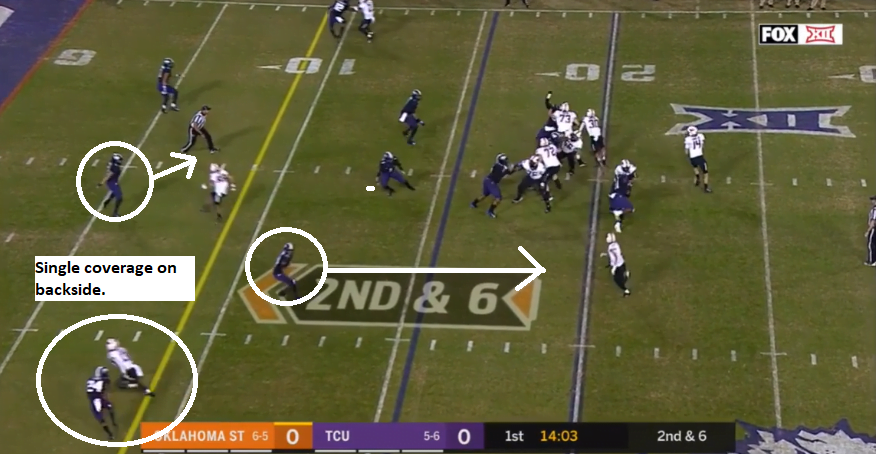 With the dig route from inside receiver Landon Wolf moving the Horned Frog safety out of the middle of the field, Tyron Johnson is one-on-one with the cornerback and he’s able to create separation as Corn hits him with a nice ball in the back of the end zone.

Additionally, we saw this fly sweep motion again on Stoner’s big play in the fourth quarter. The motion gets Stoner into space, and with the other receivers to this side clearing out down the field, he only has to make one guy miss on his way to a huge gain.

We also saw a couple of cool wrinkles, like stacking the inside receivers, as shown in the picture below. 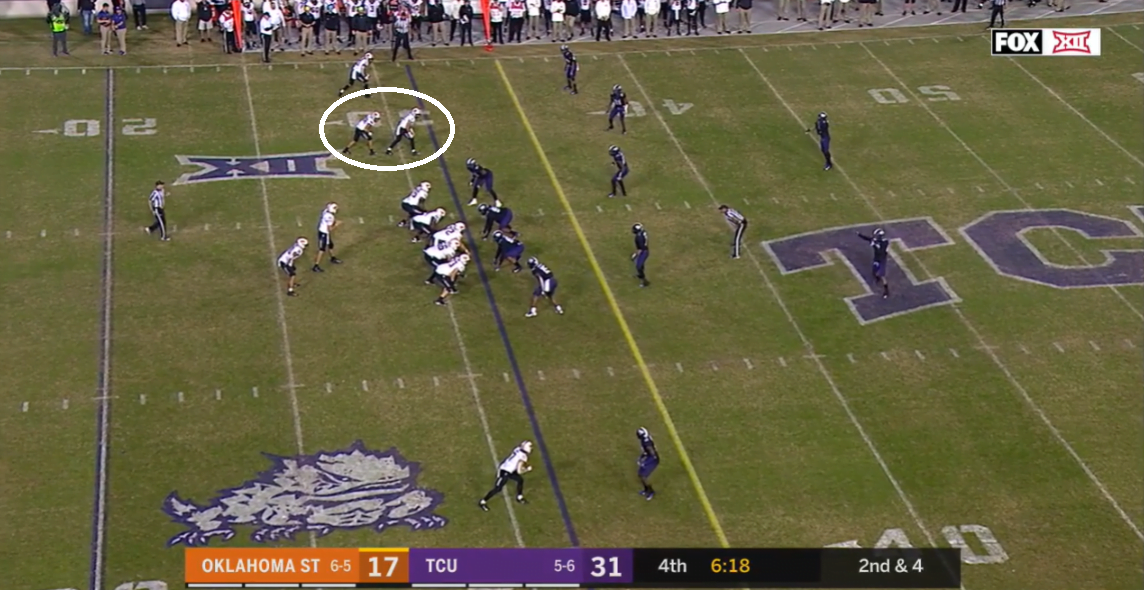 And, getting Cowboy Back Britton Abbott involved for his first reception of the year on this play shown in the following video.

In the clip above you see TCU blitz the strong safety of the edge, as they did multiple times on Saturday. At first, it looks as though Abbott is going to block the blitzing end to open up a cutback lane for Chuba Hubbard on the zone run play or create an alley for TC on the keep. However, he veers off to the flat right past the Horned Frog defender and is wide open to pick up the first down. He also gets a nice block from Tyron Johnson on the TCU cornerback.

Outside of these several plays discussed above, there wasn’t much creativity overall from the OSU offense. We saw Mike Yurcich stick mostly with his 10 personnel looks even after only scoring three points in the first half. It was really better decision-making from Cornelius, more accurate passes from TC and the receivers making catches and eliminating drops that led to the Cowboys’ offensive success in the second half. This allowed the Pokes to string together a few successful plays and pick up the tempo which caused the TCU defense to wear down and play on their heels.

It’s hard to point a finger at one particular thing that led to the poor performance from the Oklahoma State offense this weekend. It’s more of a culmination of different issues as mentioned above. One thing is for certain though, this game was just as awful to watch the second time as it was the first.