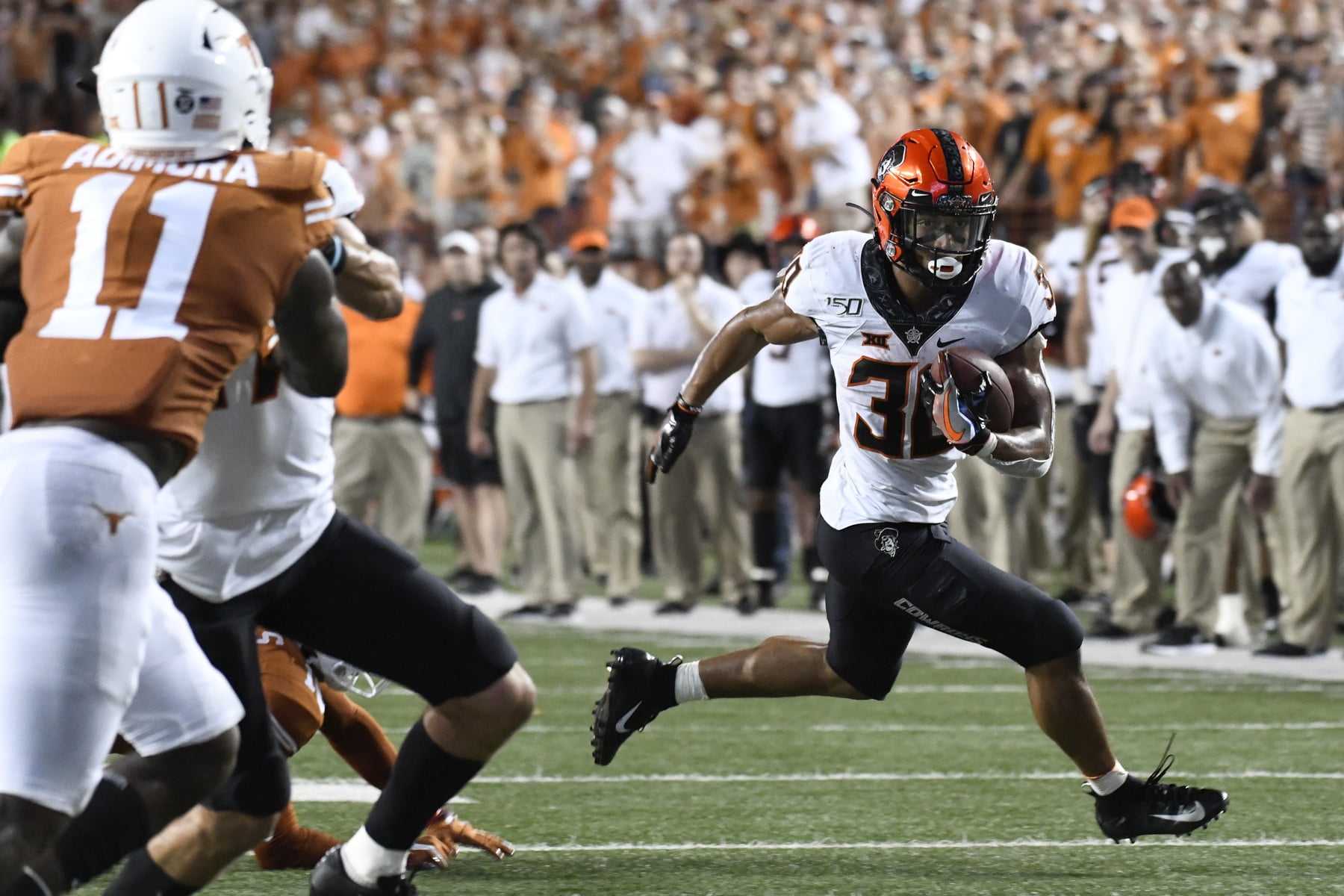 The Oklahoma State Cowboys suffered their first loss of the 2019 season this past Saturday in Austin. The offense still managed to put up 494 yards on the way to 30 points, but too many possessions ended with field goals and not touchdowns. For this post, I wanted to dive into a couple of things I saw from the OSU offense as they squared off against the Texas Longhorn defense.

In last season’s victory against UT, the Cowboys saw a great deal of success in the first half with the zone running game. They gashed the Longhorn defense for 161 yards, averaging 5.4 yards per attempt, with this blocking scheme. An example of which is shown in the following clip.

We saw the Cowboys utilize zone blocking, specifically Outside Zone, over and over again with great success a couple of weeks ago against Tulsa. With the success against UT a year ago, the success against the Golden Hurricane, the recent offensive line play and Chuba Hubbard’s incredible vision, you can see why it would be part of the OSU game plan. However, not only was it a primary part of the plan… it was THE plan. Of LD Brown and Hubbard’s 38 combined rushing attempts, I only counted ten runs that weren’t some form of zone blocking.

The rushes that weren’t zone were primarily either H-Counter or Power, with some draws sprinkled in.  I personally was surprised they didn’t go to these non-zone plays more often. I realize the way Texas defensive coordinator Todd Orlando runs his three-down linemen front makes it difficult for teams to utilize certain plays, but the Cowboys found success on a few of these runs. Including this H-Counter shown below to get the Cowboys a first down, and the Power run in the following clip which resulted in a touchdown.

To be fair though, there wasn’t a ton of success found on H-Counter and Power outside of the two clips shown above, but I would have loved to see some more variety out of the Cowboy rushing attack.

You have to give credit where credit is due, the UT defense defended the run really well and even added in some wrinkles like cornerback blitzes, as shown in the following video (actually on another H-Counter), allowing them to have an extra defender in run support.

A well-schemed defense, a lack of variety in the rushing attack and some sub par offensive line play will lead to a 3.3 yard per attempt average from your star running back.

On the other hand, the Cowboys were able to get things going on the ground with Spencer Sanders, but a good chunk of this came from his scrambling ability and not the Pokes’ designed run game.

One positive thing about the Cowboys’ carrying the ball 56 total times is it’s a great way to setup the play action pass. The play action pass is effective because, if run correctly and at the appropriate time, it will cause the defenders to bite on the run fake and will move them out of position. This creates open passing windows for the quarterback. When you add in the rollout with a mobile quarterback, it adds the option of turning up field and running the ball if the receivers aren’t open downfield.

We’ve seen the Cowboys utilize play action in the first three games, but it was very successful on Saturday night. In the video below, you’ll see OSU line up in a Pistol formation. After running the ball on first down, the Cowboys are facing second and short. As Sanders fakes to Hubbard, you see the Longhorns have one of the corner blitzes called that I mentioned above. With UT over committing to the run, there’s only safety Caden Sterns left to cover Tylan Wallace. Wallace breaks to the outside and Sterns, lined up as a deep safety, is giving too much cushion to make a play.

Sanders’ ability to throw on the run is impressive, but he also showcased his ability to throw a nice ball from the pocket as well. In the following clip he hits Cowboy receiver Braydon Johnson on the deep ball after the play action fake to Hubbard. The play action might have held up Johnson’s defender initially… but it also might have just been Johnson’s blazing speed that allowed him to create some separation.

It was really surprising to me that Oklahoma State offensive coordinator Sean Gleeson didn’t use any play action in short yardage situations, especially roll outs when they were around the goal line.

I’m still really excited to see this Cowboy offense continue to grow throughout the season and I think having guys like Hubbard, Sanders and Wallace is something special. I expect the offense to have a solid outing against Kansas State next weekend.