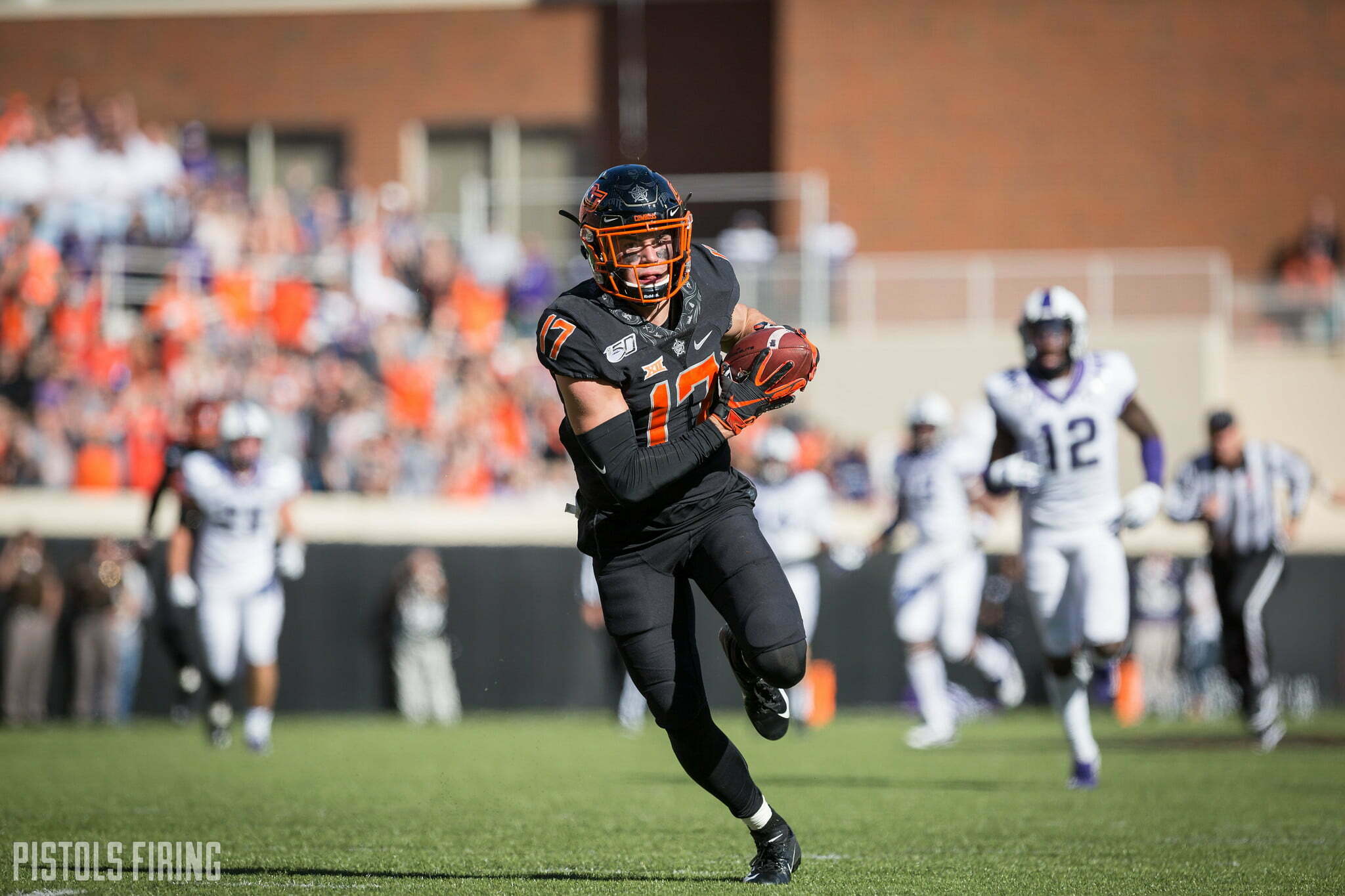 After averaging nearly 80 plays per game a season ago, Oklahoma State recorded another victory with their play total in the 50s. The Cowboys defeated TCU 34 – 27 this past Saturday and did it again by hitting on multiple long scoring plays. Below I’ll cover my key takeaways from the OSU offense against the Horned Frogs.

In last season’s 31-24 loss to Gary Patterson’s TCU squad, the Pokes went mainly 10 personnel (one running back and no tight ends) with four receivers split out wide. Even when they went 11 personnel, they primarily had the Cowboy Back split out, as opposed to on the line of scrimmage, lined up as the H-back or lined up in the backfield.

In addition, there was minimal pre-snap motion, and almost none of the fly sweep motion we’ve seen Cowboy teams of recent years use with regularity. However, when the Cowboys did utilize motion, they found success, as you can see in the example below.

The motion gets Stoner into space, and with the other receivers at the top of the screen clearing out down the field, he only has to make one guy miss on his way to a huge gain.

Building off of this, the Cowboys decided to make pre-snap motion a focal point of their offensive game plan this past weekend. We saw it on the second play of the game, shown in the following video.

Inside receiver Landon Wolf starts to move in an “orbit” motion. This means he is motioning across the formation and is running behind the deepest player in the backfield, in this case OSU running back Chuba Hubbard.  As Wolf begins his motion, you will notice the TCU safety near the bottom of the screen drop down toward the line of scrimmage to meet the Cowboy receiver as he completes his motion to that side. This gives away that the Horned Frogs are in man coverage.

At the snap, Wolf halts his motion and runs a swing route back to the side of the field he was originally lined up on. Cowboy QB Spencer Sanders makes a play fake to Hubbard and then looks out to Wolf on the screen. The slight pump fake causes the TCU safety to hesitate, leaving Dillon Stoner in one-on-one coverage on the outside. Sanders makes a nice throw, and Stoner probably could have caught this one, although it was nice defense from the Horned Frog defender.

We see the same motion only a few plays later in the clip below.

But this time Sanders hands off to Hubbard between the right guard and right tackle with Cowboy Back Logan Carter lead blocking through the hole on a type of HB Iso-style running play.

It wasn’t just the orbit motion that created problems for the TCU defense, as you see below on the big touchdown pass to Stoner. Wolf’s pre-snap movement causes confusion among the Horned Frogs, allowing Stoner to get free with no safety over the top. It helps when your defender falls down … but still, OSU got a favorable matchup due to some eye candy before the snap.

Again, you’ll see the Cowboys get a nice gain after beginning the play with motion.

As I mentioned above, it was a major part of the Cowboy game plan, and it worked out in their favor.

We’ve seen what Hubbard and this Cowboy offensive line can do with both inside and outside zone this season. I’ve written about it several times already this year so I won’t spend too much time on it. However, I did just want to mention it because of plays like this one where it is utilized.

Something else we saw from the Pokes’ running game against TCU was the zone slice.  In the zone slice, the H-back will move away from the play side, opposite the offensive linemen, and block the defender on the backside. An example of this is shown in the diagram below from footballstudyhall.com. 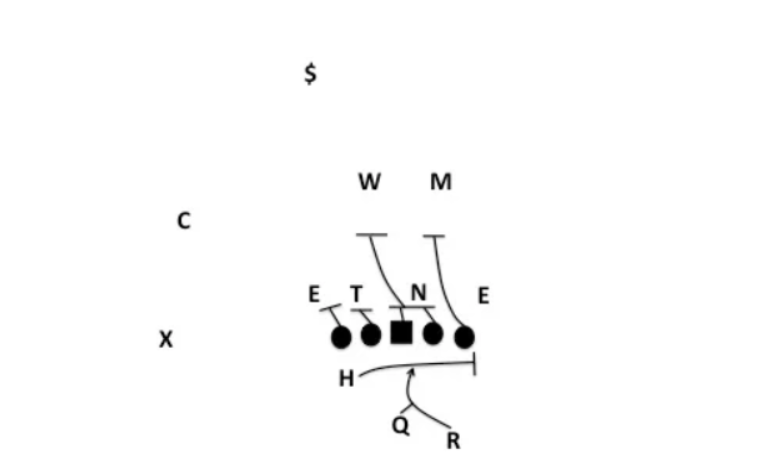 As you see in the above image, this “slice” block by the H-back allows the offensive tackle (far right on the line in the diagram) to move up to the second level and block a linebacker. It also allows the tackle to assist with double team blocks if the defense has a dominating tackle on their side. Here’s an example of this from Saturday’s game.

As previously mentioned, Cowboy Back Jelani Woods’ slice block allows right tackle Teven Jenkins to get upfield and seal off the linebacker.

Lastly, I wanted to talk about the zone bluff, which is built off the play above. On this play, the H-back will bluff the slice block. By “bluff,” I mean he will go around the backside defensive end, who is the Sanders read on the play below, and take the first defender on the outside. See the diagram below from usafootball.com for further detail. 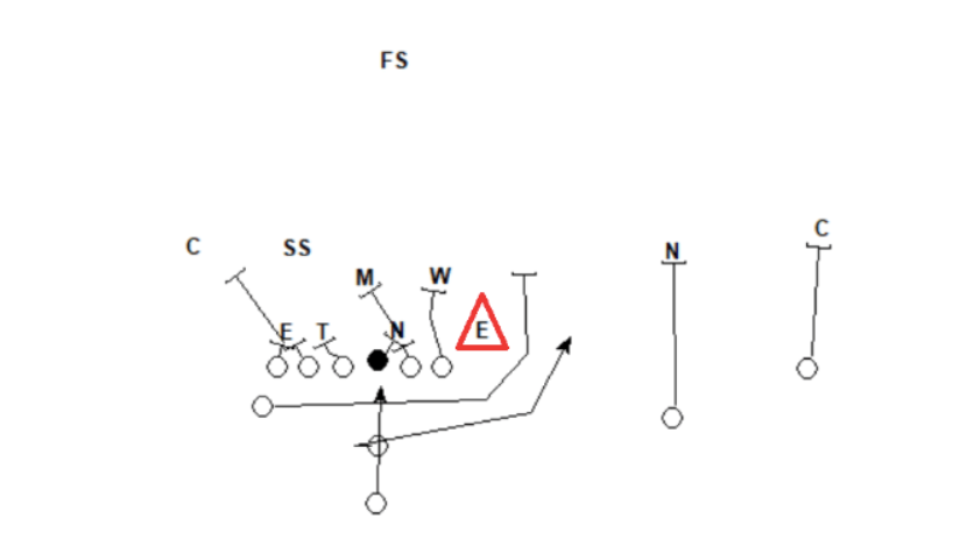 As you will see in the video below, the defensive end shoots in towards the running back, telling Sanders to keep the ball and take it around the end with Woods as his lead blocker.

Overall, it was a nice game plan from OSU offensive Coordinator Sean Gleeson and I was impressed with what I saw from this Cowboy offense.