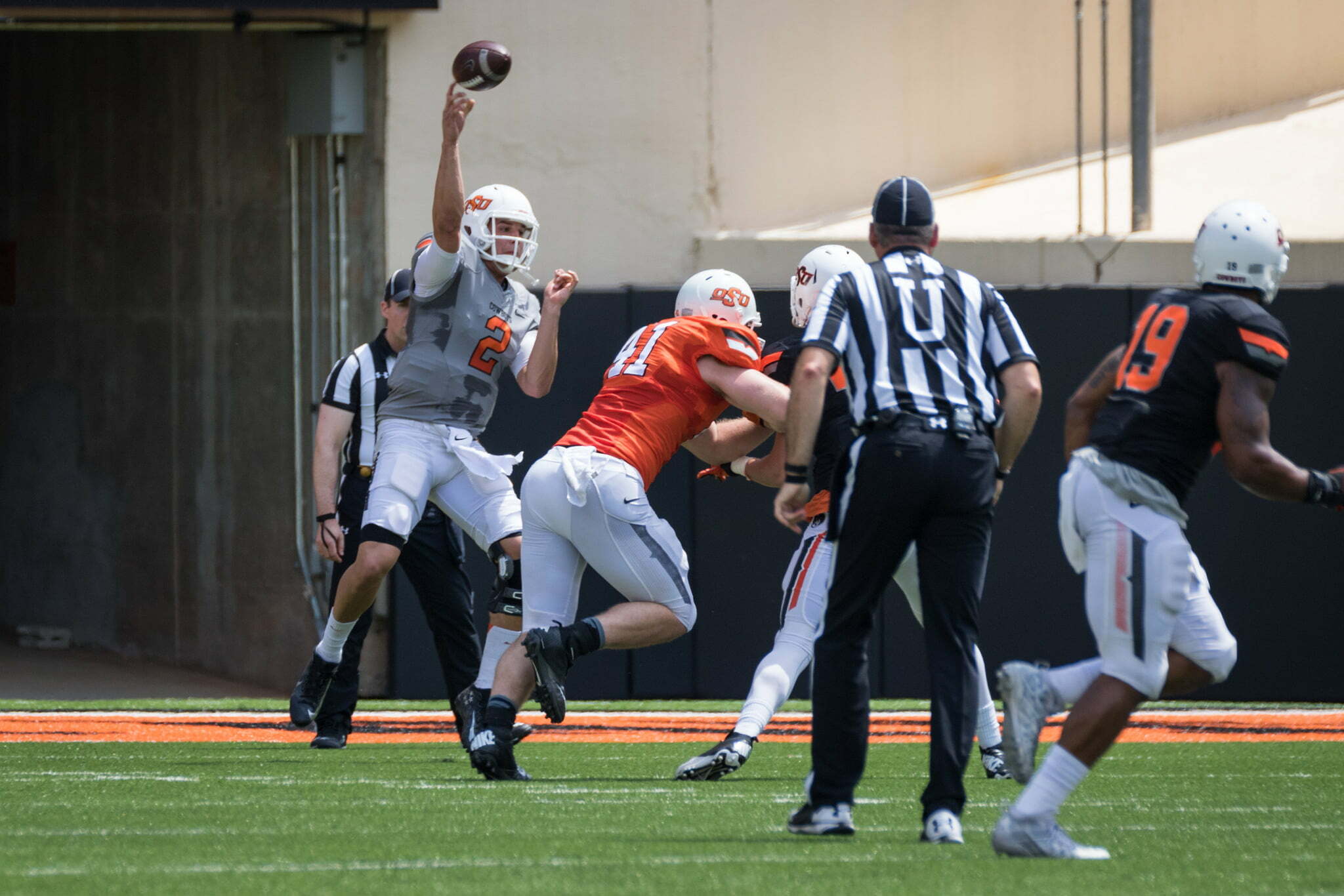 Friend of the blog Adam Lunt (follow him on Twitter) broke down some Mason Rudolph film recently after all the buzz No. 2 has been getting for the 2018 NFL Draft. Hope you guys enjoy his evaluation of QB1.

I recently did a pretty extensive film study of Mason Rudolph, I also did one on what are considered the top six QBs in next year’s NFL Draft – Sam Darnold, Josh Rosen, Josh Allen, Luke Falk, and Lamar Jackson. My hope was this would provide some context on my evaluation of Rudolph, hopefully to shake off any orange-colored glasses that I may or may not have. I have a mild obsession with the NFL Draft, specifically QBs and OL as they are the two hardest positions to scout in my opinion.

I think a good starting point with Rudolph is his leadership and “intangible” qualities. I really like the Bill Parcells method of evaluating QBs, I’ve listed the requirements below. He pretty much knocks all of these out of the park. He almost qualifies for all of these with one full season left.

I’ve seen every snap Mason Rudolph has ever played in college. However most of those games were viewed live after one or two beers (or something around there) so I went back and watched every snap of the following games — @WVU 2015, Ole Miss 2015, Central Michigan 2016, Pitt 2016, Texas 2016, and Colorado 2016.

Some things that you will hear on Rudolph all season while getting geared up for the draft next year will be the scheme he plays in and how it doesn’t expand into more complex route combinations and coverage reads. I think it’s a fair assessment, OSU’s offense is quite simple in terms of progressions and also route trees and doesn’t include a ton of anticipation throws.

The core routes are go route, hitch, out, smash/corner, slant, seam and dig. There are a few good examples of Rudolph going through proper progressions but only a handful where he makes it to a 3rd option, which is usually some type of check down.

These are the types of things NFL teams will hold against Rudolph come April 2018. Personally I don’t put a lot of stock in this, but I know a lot of people involved in draft process will. With the NFL going to more spread-based concepts by the day, I think Rudolph is more than competent enough to pick up on a NFL playbook.

One thing that really pops out at you immediately is Rudolph’s touch. One of his best strengths is knowing when drive the ball on a rope or try to put more air underneath it to hit a certain spot, this is a big deal specifically in layered coverage you will see in the NFL. There are some really great examples of this, two throws to Austin Hays actually come to mind from Texas and Colorado games in addition to the dime he threw to McKleskey against Texas for a TD.

Prob shouldn't have thrown into double coverage but great touch right in between 2 defenders. Hold on 66, called back ? pic.twitter.com/3XtzK44tq0

This is one of my main knocks on Wyoming’s Josh Allen, who I’m sure most of you have heard rumors on him being a prime candidate for the No. 1 overall pick next year. I’m not on that bandwagon. He has a cannon arm but really only throws fastball and doesn’t show consistent touch. A big arm will only get you so far, just ask Jeff George. Rudolph shows great touch on a variety of throws in the games listed above, being able to diagnose the coverage and drop balls with accuracy into tight windows.

One of my favorites. This is NFL throw. Anticipation, Ball thrown before MA clears LB. Big 4th down conversion. pic.twitter.com/lVxyuQKDVi

I think Rudolph has plenty of velocity, this was shown on a few 10-18 yard out routes that were on the opposite hash and was able to get the ball there fine. The issue here is consistency, and I pair this with not being 100 percent confident in all of this throws. You could chart every single out route or hitch in intermediate range (10-18 yards) outside of the hashes and he throws with tremendous velocity and accuracy at an unbelievable rate. Actually I don’t think I recall one throw where he had sufficient time that he missed in that area. Simply put, it’s his best throw.

Where you see inconsistencies are on quick passes in the slot and throws over the middle – both in accuracy and velocity. He just doesn’t seem as comfortable here, however there are plenty of examples where he is given time and rips a ball with good ball placement. It absolutely needs to be a point of emphasis this season, more consistency is needed. NOTE: coming into this study I was under the impression Rudolph was really strong in intermediate throws over the middle, I was wrong to a certain extent.

There is a lot of discussion on Rudolph’s deep ball, specifically Pro Football Focus designating him as one of the best in this area. This certainly showed up on the tape. He showed consistent ability to throw the ball deep with accuracy and touch. He rarely overthrows deep balls (I believe I counted four in those six games, OSU throws the ball deep a lot), and if he misses he will short arm it a tad.

I can live with this because I think it still gives the WR a chance to go up and get the ball. Especially with the back shoulder throws these days and how WRs are taught to look back, it’s an effective strategy. Given the ability of Lacy, Washington and Ateman to go up and high point underthrown balls, it’s not really a huge issue.

His mobility will probably be something that will be discussed at length throughout the year. Rudolph has average athleticism, he is better really in more of a straight line running. I think his lateral quickness is actually below average. His pocket presence is solid, but at times is unable to bounce out of the picket and buy more time. A huge part of pocket presence isn’t really running, it’s slight movements up/back/left/right to buy just 1-2 more seconds to get a pass off.

He is able to pick up first downs on the ground at times.

Another problem is for Rudolph to consistently deliver good balls he really needs to have time and have his feet set, I don’t necessarily think his mobility will enable him to break away from consistent pressure to do this.

Rudolph really struggles with short passes, under five yards and at or behind the line of scrimmage. You can clearly see at times that his footwork falls apart here, and like I mentioned earlier shows little/no confidence on some of these throws. A lot of these throws call for him to get set and throw the ball immediately after the snap, and it’s just not his comfort zone. I charted at least nine throws that were high on routes seven yards or less, there were other ones that were wide or short as well. He has a tendency to float some of these balls as well, which supports my theory that he doesn’t feel confident enough to throw the ball with zip. More often than not these balls were so bad they were incomplete or so high they gave the WR no opportunity for YAC.

It was a lot of fun watching all of these games again, this period of the year is what I call the sports death hole and got me excited about football again. My summary would be that Rudolph is an excellent QB and a really strong candidate to be a good NFL QB as well. I think he needs to shore up some of his footwork issues and work on short/intermediate throws, but I think he’s in line for a big year. At this point I would rank him 4th overall for QBs in regards to the 2018 NFL Draft and pretty much a lock for 1st round pick.

One more thing, someone please take the WVU 2015 offensive tape and set it on fire. I have no idea how we won that game.