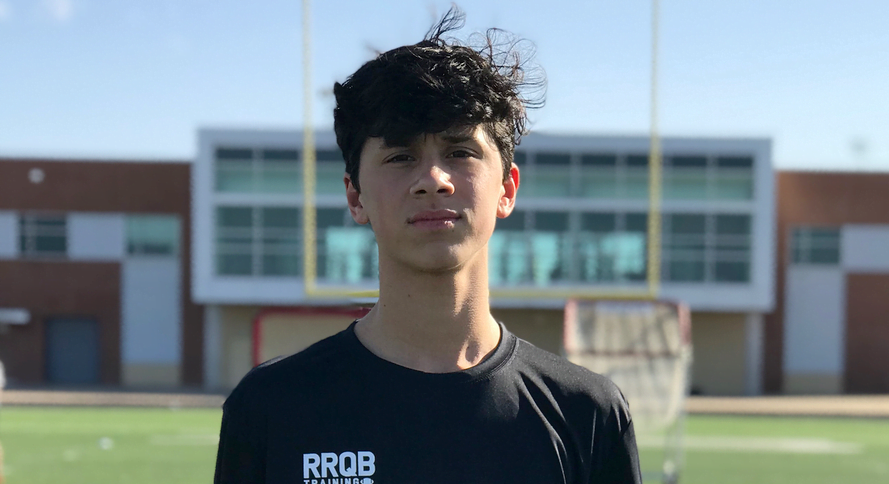 For today’s recruiting film study, I’ll be stepping back from the 2021 class as I breakdown a recent Oklahoma State commitment in the 2022 recruiting cycle, three-star quarterback Garret Rangel.

Along with OSU, the Frisco, Texas native held offers from Houston, Missouri State, Nevada, Northwestern, North Texas, Tulsa, Utah, Vanderbilt and Virginia Tech. The Cowboys were his first Power Five offer back in April 2020, which was not long after Rangel concluded a sophomore season in which he went 279-for-403 (69.2% completion percentage) for 4,855 yards and 50 touchdowns in a 15-game span. He only had 10 interceptions on the year.

Rangel, along with current OU receiver Marvin Mims and 2021 OSU signee Jaden Nixon, helped lead the Lone Star Rangers to the Semifinals of the Texas 5A Division I Playoffs. For his performance in 2019, he was named the Texas District 5A Division I Offensive Newcomer of the Year. Last season, Rangel no longer had the luxury of throwing to Mims, but still had the services of Nixon and managed to put up another excellent statistical performance. In 11 games, he went 188-for-272 (69.1% completion percentage) for 2,429 yards and 27 touchdowns, along with only five interceptions.

If you normalize the numbers and compare them against each other, you will notice that he took a statistical drop from his sophomore to junior seasons. However, I believe this can be attributed to two fewer attempts per game and an increased workload for Nixon on the ground. Also, losing the all-time career receiving yards leader in Texas high school football history probably played a role as well.

When he’s not manning the QB1 spot for Lone Star, Rangel stays active with football as he’s attended many different camps and 7-on-7 tournaments. He’s participated in the The Opening Combine – Dallas, Elite 11 – QBEPIC and recently had a solid performance at the Battle Miami 7-on-7 Tournament.

Also, off the field, I found out Rangel also has some skills on the keyboard.

Now, let’s get to the film. I was able to watch Rangel and Lone Star take on W.T White in the first round and Highland Park in the third round of the 2020 5A Division I Texas High School Football Playoffs. I also took a look at his HUDL highlight tapes. Below, I’ll cover some key areas of the quarterback position and how Rangel stacks up in each one.

Lone Star primarily based out of 10 and 11 personnel sets, and the Rangers liked to move with tempo. Rangel looked comfortable in the pocket a majority of the time, and you could tell he was the leader of the Rangers’ offensive unit. He took care of the football well, as shown by his low interceptions numbers listed above. Additionally, he had a six-game streak in which he didn’t throw an interception last year, which is pretty impressive when he’s attempting nearly 25 passes a game.

Rangel is also a solid decision maker on the run. I only counted a few throws in the two games I watched where he threw into coverage or badly misread the zone and threw a risky ball. There are multiple examples in Rangel’s film which show you just how good he is at moving the defense with his eyes, standing tall in the pocket, setting his feet and delivering an accurate ball to his intended target, as you’ll see in the following clip.

I think my only real knock on Rangel in terms of decision making and pocket presence is that he at times left the pocket a little too soon. There were plays where he would leave the pocket and have to throw the ball away when I thought he had maybe a little more time to stand in and make a throw downfield. In the Highland Park game, he was getting pressured early and often, and it led to him bailing on the pocket too early at times as the game went on. To his credit though, he does a great job avoiding sacks and does a good job of not forcing the ball downfield.

Rangel’s arm strength isn’t top tier, elite level, but he has more than enough power behind his throws. When he gets his base right, he can drive the ball accurately to the opposite hash. Below you’ll see him make a nice throw to the far side of the field.

Rangel almost always follows through with his trail foot and does a nice job of using his lower body to add velocity to his throws. In addition, he’s able to still put some heat on his passes when moving outside the pocket, as shown in the following video.

As you’ve been able to see from the clips above, Rangel is an incredibly accurate passer. When he has time in the pocket, he’s able to put the ball on the money with some power behind it, as displayed in the clips above, and he’s got excellent touch on his throws, a displayed by this beautiful ball from the W.T. White game.

Rangel’s accuracy may be one of his best overall attributes. Whether it’s the short game, such as hitches, slant and swing passes, or back shoulder throws like the one shown in the next clip, Rangel is on target more often than not.

His ability to read the defensive coverage pre and post snap is pretty incredible for a junior in high school. I was talking to Adam Lunt of the Tape Doesn’t Lie Podcast about Rangel, and he pointed out this throw to me.

As Lunt noted in our discussion, Rangel feels the backside coverage coming from the safety and throws the ball to his tight end’s opposite shoulder to not allow the safety to make a play. This is not your typical play from a high school QB. His ability to read the coverage and make an adjustment almost mid-throw is pretty impressive.

I don’t remember a single designed QB run in either of the games I watched, and I think I saw one in Rangel’s 2020 HUDL tape. However, this does not mean the young quarterback isn’t athletic. I was able to find a SPARQ 40-yard dash time of 4.68 for Rangel, and the commentators during the Highland Park game mentioned this time as well. When he gets out of the pocket and on the move, you can see he has more than enough speed to make a play with his legs, an example of this can be found in the next clip.

Rangel is definitely more of a pocket passer than a dual-threat, but I think he has the skill set to be an option in the Cowboy running game if he can add some weight to his 170-pound frame.

Overall, I think this is a great pickup for the Pokes. Rangel is a very mechanically sound, smart quarterback who I think has the ability to be a quality QB at the next level. The offense at Lonestar had enough complexity to prepare him for some things he will be asked to do as a college quarterback. As I mentioned above, he will need to add some size, but that shouldn’t be a problem as it looks like his frame can support additional weight. I’m excited to see what he does next season without Nixon, but I personally believe it will be another outstanding year for the Lone Star quarterback.