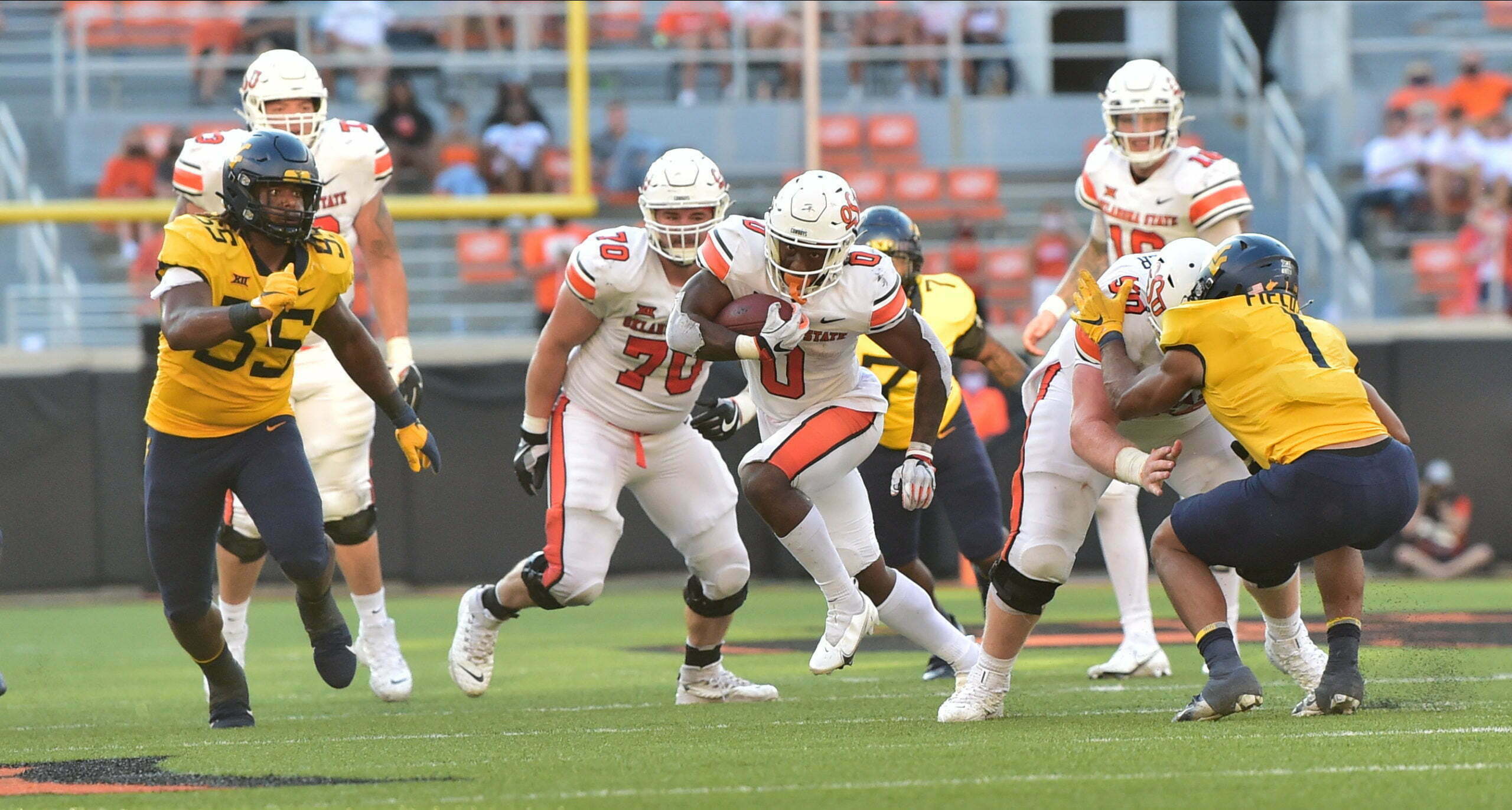 Oklahoma State recorded its second victory of the 2020 season this past Saturday at home against West Virginia. The Cowboys were able to get things going on the ground, with 100-yard rushing performances from both Chuba Hubbard and LD Brown, and had an excellent performance from the defense on their way to a 14-point win.

Below I wanted to cover a few key takeaways from the OSU offense as it was able find a better rhythm against the Mountaineers than it had against Tulsa a couple of weeks ago.

It was apparent early on in this game that with some of the inexperience on the offensive line and the struggles it had at times last week, that offensive coordinator Kasey Dunn was going to utilize extra protection as much as possible. Out of the Cowboys’ 63 total plays, I only counted a few times where they were in 10 personnel (one running back and no tight ends/Cowboy backs). The Pokes had at least one Cowboy back in on almost every play of the game.

There were also some 12 personnel (one running back and two tight ends/Cowboy backs) looks in the first half, but Dunn leaned on these a little more heavily in the second half, specifically in the third quarter. When Shane Illingworth entered the Tulsa game, we saw Dunn start to favor the diamond formation, and he went to it again against WVU this past weekend. One example is shown below.

In addition, the Cowboys lined up in a 12 personnel set with a Cowboy back on each side of the line of scrimmage, which reminded me of watching film on former OSU OC Sean Gleeson’s Princeton offense before he arrived in Stillwater (shown below).

As I mentioned above, Oklahoma State had at least one Cowboy back on the field for a majority of the game, and Dunn got them involved in the blocking schemes early and often.

As Inside The Pylon explains, “A chip block is a quick-hitting block, most often executed by a running back or tight end before releasing into a route. This technique is typically used to target edge rushers in order to stall their jump off the snap and/or redirect their path away from the quarterback. Because the block is often unexpected by the defender, a quality chip can knock a pass rusher off balance, leaving the offensive lineman responsible in good position to finish the block.”

The Cowboys utilized this during the WVU game to put their lineman in more favorable spots when pass protecting. In the video below you’ll see Cowboy back Logan Carter’s chip block assist redshirt freshman left tackle Jake Springfield.

Split zone is a variation of a zone blocking scheme where the extra blocker, in this case Cowboy back Jelani Woods, blocks across the formation, against the flow of the play. This play causes confusion for the defense, as the Cowboy back is blocking one way but the play is going another way, and it can also create a cut back lane for the ball carrier. Below you’ll see a diagram and a video of the Cowboys running this play against the Mountaineers.

In the next clip you’ll see the Cowboy back’s block across the formation give Hubbard a cutback lane.

The Pokes also found success running out of the diamond formation I mentioned above. In the diagram and video clip below, you’ll see another variation of a zone blocking scheme, but this time there are two Cowboy backs involved. As the line blocks its zone concept, the Cowboy backs insert through the gaps as lead blockers at the second level (or the linebackers). This play allows the offensive line to focus on blocks on the defensive line, and not have to worry about breaking off to the second level. The Cowboy Backs are responsible for this portion of the play. See the image below of how this play is typically executed.

And, in the following video you’ll see this play result in an OSU touchdown against WVU.

Formation into the Boundary

The guys calling this game pointed out several times that Oklahoma State set the strength of their formation to the boundary. I wanted to briefly discuss what exactly this means and why the Cowboys do this.

The strength of your play can mean the side your tight end is on, the side of the formation with the most eligible receivers, the side the fullback is offset to, etc. Typically, this is set to the wide side, or open side of the field. However, last Saturday the Pokes set the strength to the boundary, or the short side of the field, on multiple occasions. See the image below with two of the three receivers and the Cowboy back lined up on the right side, into the boundary.

As you see below, the Pokes end up running the play back toward the wide side of the field, resulting in even more confusion for the opponent.

Illingworth was 15-of-21 on the day for 139 yards and one interception. The OSU passing attack against West Virginia consisted of several wide receiver screens, which we didn’t see much of against Tulsa, including the one shown in the following video which we have seen from past Cowboy offenses.

The Cowboy back will motion out toward the top of the screen. At the snap, he will run the outside to help as a lead blocker on the screen to the wideout.

Along with screens, the Pokes took a few deep shots. In addition, as I discussed in last week’s film breakdown, they incorporated some more of their 2017 passing attack into the game plan, like this slot option pass to Dillon Stoner.

Coach Wesley Ross explains this play in his breakdown of OSU’s 2017 offense.

The idea is to isolate one receiver in space and allow him a myriad of options to get open.  The splits of both outside receivers are usually pretty wide, with the receiver to the side of the choice route sometimes lining up just a yard from the sideline… He will run vertical and has one of three options at 10-12 yards.  If the middle of the field is open (2 high) he will run a post and cross the near safety’s face.  If the middle of the field is closed (1 high) and he can can beat the defender covering him he will continue vertical and try to win deep.  Against a 1 high look where he is capped he will stop and work back to the ball.

In the following clip, you’ll see the middle of the field is open, so Stoner runs the post. Illingworth makes a nice throw but Stoner is unable to come down with the ball.

We also saw some run-pass options, or RPOs, like the one in the following video. Illingworth sees the single-high safety drop back off the snap, pulls the ball back and fires to the receiver running the post.

Overall, I thought the offense played a decent game and built off its performance against Tulsa two weeks ago. I’m not sure who will be QB1 next week, but if we see Spencer Sanders return from injury, I would expect to see some the quarterback run game added back into the mix.