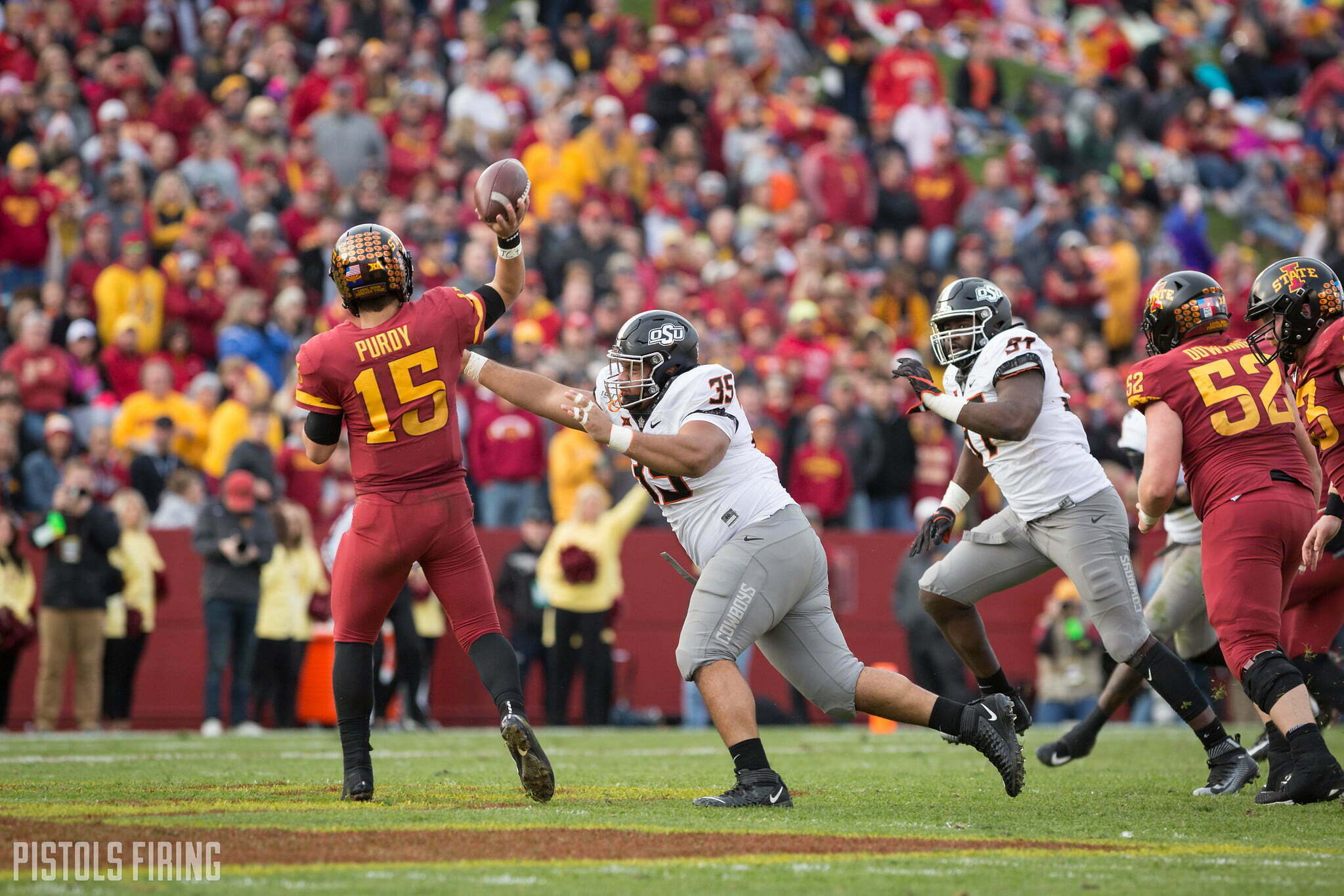 Oklahoma State is getting ready to take on the 3-1 Iowa State Cyclones this weekend in Stillwater. It’s the first OSU game in three weeks, as the Cowboys’ matchup with Baylor was postponed to later in the season, and it’s one of the premier college football games on the slate for this Saturday. Before the Cowboys face off against ISU, I wanted to take a quick look at one dangerous piece of the Cyclone offense … tight end play.

ISU offensive coordinator Tom Manning is in his second year back with the team after making a brief run to the NFL, and he has been a part of Cyclone head coach Matt Campbell’s staff dating back to his days at Toledo. In regards to his scheme, Manning has a talented running back in sophomore Breece Hall, who currently leads the Big 12 in pretty much every rushing statistic, and Manning likes to give him the ball (a lot) primarily on zone running plays, while also mixing in some gap scheme runs as well. Additionally, ISU will also mix in some toss plays around the edge. Hall is a huge part of the Cyclone offense and should be a focal point of attention for the OSU defense, but he’s not who I want to focus on for this post.

The three Iowa State tight ends, Charlie Kolar (88), Chase Allen (11) and Dylan Soehner (89), are second, fourth and sixth on the team in terms of receiving yards, respectively. They account for 33% of the team’s total receptions, and they have hauled in two of ISU quarterback Brock Purdy’s four passing touchdowns on the year. The Cyclones pretty much always have a tight end on the field, and normally base out of 11 (one running back and one tight end) and 12 personnel (one running back and two tight ends). However, they will also show some 13 personnel looks with three tight ends, as shown in the image below.

In addition, they will move their tight ends all over the field. They will have their hand in the ground on the line of scrimmage, be in the H-back spot, line up in the backfield and be split out as you’ll see in the following image.

All three of these guys are capable blockers, and Manning will line them up all over his formations to exploit favorable matchups against opposing defenses both in the running game and the passing attack. In the passing game, they are problems for defensive backs and linebackers alike, as they are all three 6-foot-6 or taller and each way more than 240 pounds.

The Cyclones normally look to target these guys in the middle of the field, but also will hit them in the flats and on fades and love to go to them in the red zone, as you’ll see in the following video showing a touchdown on a “Pop” pass to Kolar.

Speaking of Kolar, the Oklahoma native had an impressive outing against the Cowboys a season ago, with eight receptions for 88 yards. In addition, he had this touchdown shown below on busted coverage from the Pokes.

So, how does Cowboy defensive coordinator Jim Knowles slow down these tight ends? Well, I think the key is to pay extra attention to Kolar. Allen and Soehner can hurt you as well, but Kolar is one of Purdy’s favorite targets. Additionally, the Cyclone receivers, outside of Xavier Hutchinson, haven’t really shown much in terms of production. I think the key is to force the receiving corps to beat you.

From a schematic stand point, this would mean “bracketing” Kolar in the passing game, as the guys from the Tape Doesn’t Lie Podcast mentioned on their show this week. What does this mean? Well, the video below does a good job of explaining this coverage by OSU.

The video above shows how the Cowboys use a linebacker to take away the underneath throws to the outside receiver at the top of the screen, and the defensive back takes away anything deep. This allows that defensive back to focus more on watching for a deep release, and if the route is short to intermediate, he can break and help the linebacker.

We saw OU do this against Iowa State when they matched up earlier this year, as you’ll see below.

The image above displays just how much attention the Sooners were paying to Kolar.

The problem with doing this is you have to be great in coverage on the outside, since you are now dedicating an extra man to the middle of the field to take away underneath throws to Kolar. That being said, I think the Pokes have the skill in the defensive backfield to be up for this task, and I think we see another solid performance from the defense this weekend.