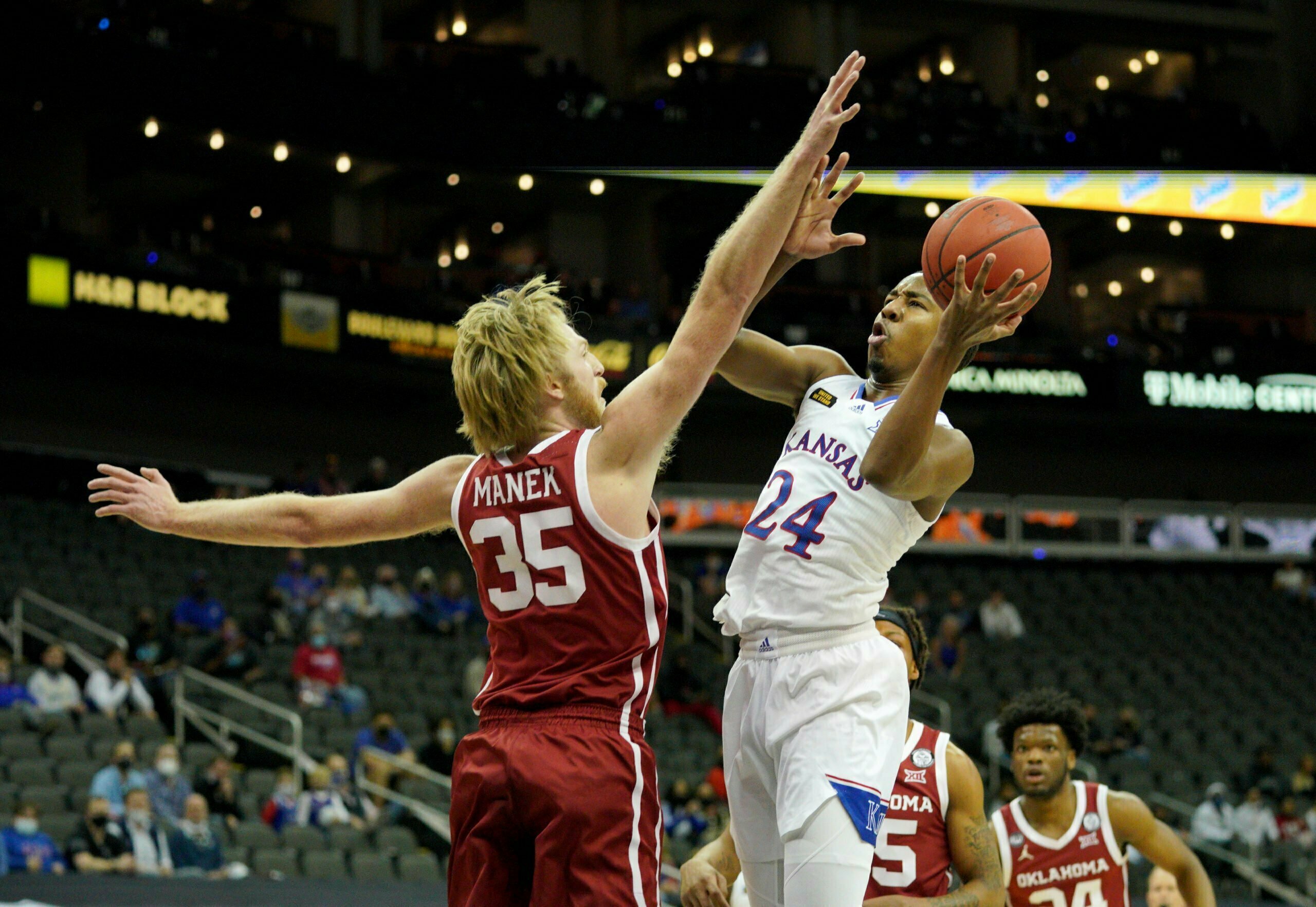 Last Thursday, Oklahoma State picked up a commitment from former five-star recruit and KU transfer Bryce Thompson. According to 247Sports, Thompson was ranked as the No. 20 player nationally and the top recruit from Oklahoma. He entered the transfer portal on April 13, and received interest from schools such as Arkansas, Kentucky, Oklahoma, Oregon, Tulsa and UNC, along with OSU. Thompson narrowed his list down to the three Oklahoma schools, OU, OSU and Tulsa, before ultimately deciding to take continue his career in Stillwater.

He played his high school ball at Booker T. Washington in Tulsa, Okla. and was named the Gatorade Oklahoma Player of the Year twice during his tenure with the Hornets, and was named to the McDonald’s All-American Game. Thompson helped Booker T. make playoff runs all four years and finished his senior season averaging 24.6 points, 5.9 rebounds and 2.8 assists.

Last season at Kansas, he averaged 4.6 points, 1.5 rebounds, 1.1 assists and 0.4 steals per game. In addition, he shot 22% from three on 1.8 attempts per game and 65% from the free throw line on just under one attempt per game. Due to a cracked vertebrae in his lower back and a broken finger on his shooting hand that required surgery, Thompson only played in 20 games for the Jayhawks, starting in four of those contests. He was able to recover from both of those injuries and returned to finish the season with KU.

Below are Thompson’s per-game totals from last season:

Along with the per-game totals above, one advanced statistic I wanted to highlight is his Usage %. Usage% is an estimate of the percentage of team plays used by a player while he was on the floor. Out of all Jayhawks who played in 20 or more games last year, Thompson ranked sixth in Usage % at 19.1% according to Sports-Reference. This Usage % would have ranked him fifth on the Cowboys last season, behind Cade Cunningham, Matthew-Alexander Moncrieffe, Kalib Boone, Avery Anderson, and slightly ahead of Bryce Williams and Isaac Likekele.

Thompson showed a willingness to accept this role at KU as an off-ball offensive player, but it’s not really the style that best fits his game. He showed throughout his high school career that he is a capable facilitator that can handle point guard responsibilities. Additionally, he thrives in isolation situations and operates well out of the pick and roll. He wasn’t given many chances to do these things at Kansas, and I believe that due to the injuries he sustained, and just a weird overall year because of the pandemic, he was never really able to get into a rhythm, resulting in sub-par statistics for the young guard.

Even though KU didn’t run its offense through Thompson very often or give him a lot of primary ball handler responsibilities, he still showed flashes of what he could do against high level competition. One of those things was his scoring from midrange, as shown in the clip below against Creighton.

You’ll see in the clip above that Thompson has a high release point on his shot, and he stays in control even while on the move. This is something he also put on display in high school. His size and ability in the mid-range remind me a lot of former NBA star Richard Hamilton.

Next, you’ll see Thompson come off of a screen and see that he has space to get off a shot in front of Gonzaga’s Drew Timme.

Along with his mid-range game, Thompson also showed he’s capable of hitting shots from the outside both as a catch and shoot player and off the bounce, as you’ll see in the following videos.

Now, his three-point percentage was only 22% at KU, but before his back and finger injuries he was shooting closer to 30% from distance. This still isn’t a very good percentage from behind the arc, but Thompson also wasn’t getting up a lot of attempts, averaging only 1.8 per game, and I believe he has the capability to be a much better shooter from three.

At the Under Armour campaign in high school, Thompson shot 46.8% from three while taking nearly five a game. If he can continue to work on the consistency of his shooting form and get up more shots from distance, I think he can be a guy who shoots closer to 35-38% by the end of his career with the Pokes.

In terms of ballhandling, he’s not the fastest guy out there but he has a lot of different moves in his repertoire that allow him to get by defenders. In addition, he does well maintaining his balance and finishing through contact, never shying away from it. In the next clip you’ll see Thompson with the nice spin move and finish inside against Texas.

Thompson also displayed at Kansas that he thrives in transition. He’s not an elite level athlete, but his ability to get out and run and finish on the break make him a perfect fit into OSU head coach Mike Boynton’s style of play. In the following video you’ll see Thompson finish the fast break with a nice dunk.

Lastly, Thompson has shown to be a willing passer but needs to continue improving and gaining experience in this area to become elite. He possesses the skillset to do this, as you’ll see in the clip below, and I also believe he will get the increased opportunities at OSU.

For areas of improvement on offense, I think the first thing is to continue gaining strength. He’s got good size, listed at 6-5, 195 pounds on KU’s roster, and has apparently put on another 10 pounds since he started at Kansas, but Thompson needs to continue to put in work in the weight room. He will also need to work on his ball handling. He still tends to favor going right, which teams will scheme against since they have film on him now, and he gets a little flustered when facing traps. I think these are all things he can improve upon during his time at OSU, and I don’t see any major areas of concern for Thompson on offense.

At Booker T., Thompson was flying all over the court making highlight reel blocks and grabbing a bunch of steals. However, I wasn’t really sure how good of an individual or team defender Thompson truly was from watching his high school tape. Well, at Kansas he showed that he is a more than capable college defender and even looks like he has the ability to be a elite in this aspect of the game.

In the next video, you’ll see Thompson get switched onto the 6-10, 235-pound Timme off a screen. He not only does a great job of fighting with Timme in the post, but then finishes the possession with solid on-ball defense and a great block.

Thompson’s effort level on defense was unmatched, and he showed great instincts to make plays, as you’ll see him grab the steal against Gonzaga in the following video.

Thompson also showed he can stay in front of players on the perimeter and his on-ball defense may be one of his greatest defensive attributes.

He’s not afraid to go in and fight for rebounds, and did well to always get a body on his man when the shot went up.

As I mentioned above, Thompson isn’t an elite level college defender yet, and still got lost at times or over helped. However, you could see the leap he took from high school through the end of his first collegiate season, which shows he is committed to improving on this side of the floor. Playing in KU head coach Bill Self’s defensive scheme, which calls for a lot of switching on the perimeter, allowed him to get exposure to a variety of different defensive situations. He also was asked to participate in some zone defensive assignments last year and held his own.

I think Thompson will be asked to be one of the primary ballhandlers next season for the Cowboys. We saw the Pokes utilize the pick and roll to generate a lot of their points last season, and I think Thompson will thrive in the pick and roll ballhandler position. I also truly believe he will shoot better from three next season, after recovering from both the back and finger injuries. In addition, I think he will generate a lot more free throw opportunities with his increased ballhandling responsibilities next year.

Thompson seems to be fully bought into playing for the Cowboys, as he recently played pickup with current OSU players Chris Harris Jr, Matthew-Alexander Moncrieffe and Rondel Walker. You can already see the chemistry forming in this nice pass from Walker to Thompson for three during their pickup run.

I’m really excited to see what Thompson can do next season, and I believe he has the skills to be an All-Big 12 level player.