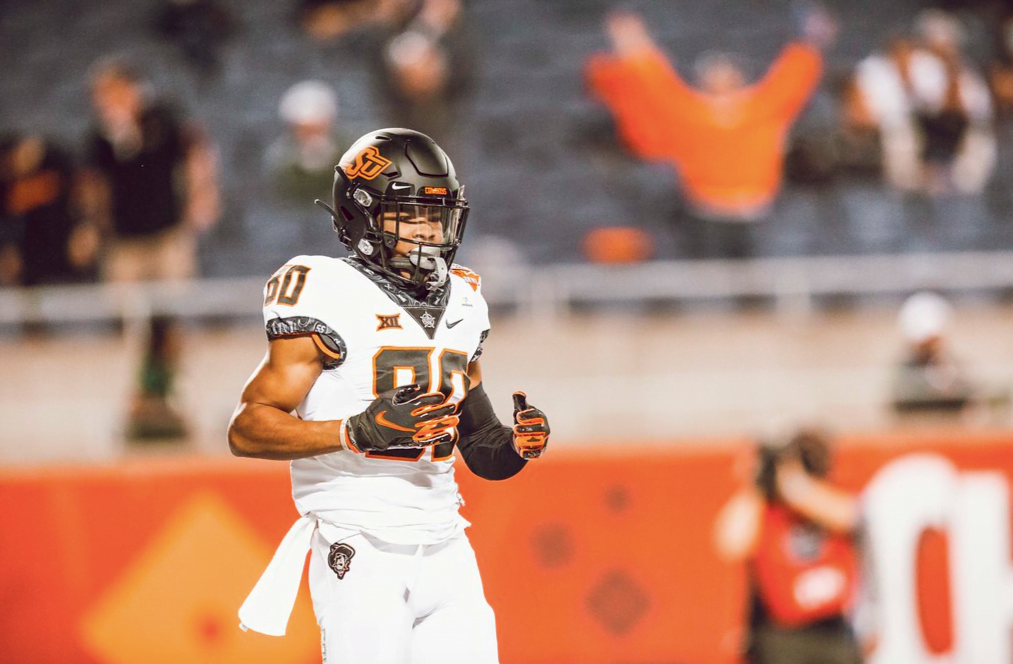 Mason Rudolph, Tylan Wallace and Emmanuel Ogbah all have one thing in common: They all made star turns in their second year at Oklahoma State.

For Rudolph, that was starting as a sophomore after a steady rise to end his freshman season, culminating with Bedlam and Cactus Bowl wins. For Wallace, it was stepping into the spotlight post-James Washington after playing sparingly in Year One. And for Ogbah, that was coming off a redshirt freshman season to tie for the team lead in sacks.

The second year is often a measuring point to how bright a player’s star can truly shine.

So at OSU in 2021, I’ve picked out five who fit that qualification who can make significant leaps as a second-year players. Today, a look at my five on offense. Tomorrow, the defensive side of the ball. Let’s get it.

1. Dominic Richardson, RB: Pretty wild that OSU almost didn’t even get Dominic Richardson in its program. If not for TCU completely screwing him out of a spot in its recruiting class late in the cycle, he’d be a Horned Frog. Now he might be the fastest-rising star in the program. As a freshman last season he played sparingly, but when he got a chance to showcase himself late in the year, he looked like an All-Conference runner — headlined by a 23-carry, 169-yard, 3-TD outing against Baylor in the penultimate game of the season. Folks are going to pencil in Dez Jackson as the starter (or LD Brown if he opts to return), but please, I beg of you, do not snooze on Richardson’s potential. He has RB1 talent and upside and fits perfectly into OSU’s system because of his speed and versatility.

2. Shane Illingworth, QB: He played in only four games last season as a rookie, but Illingworth was very solid in three of the four. It just so happens that against OU, he was ineffective, and people will remember it most because it was his last game action (and because it was OU). That would be unwise and unfair. Illingworth has a 6-foot-5 frame, strong arm and some serious moxie to boot. First-Team All-Confidence. You absolutely love to see it. Spencer Sanders will enter the offseason as the favorite to retain his starting job, but Illingworth’s tangible and intangible traits coupled with inconsistent QB play from Sanders last season should make for an offseason competition entering 2021.

OK, so maybe Presley won’t be the best player in college football. (Not this coming season. I’m not ruling it out in the future.) But I am all aboard the Presley Express for 2021 as he potentially steps into the leading role of a reloaded receiving corps. He caught one pass the entire regular season, so I understand if you’re hesitant to agree with me here, but when he went hamburger for 6 receptions, 118 yards and three scores against Miami in the Cheez-It Bowl, he made a strong case for consideration to become the next Tylan. And the fact that he’s got a legitimately solid rapport with Spencer Sanders should only help his case.

4. Rashod Owens, WR: OSU’s top two receiving options (Wallace and Dillon Stoner) are gone, so someone is going to have to step into a leading role. That might be any number of players, but among second-years not named Brennan Presley, I like Owens’ odds quite a bit. He was a multi-sport athlete in high school who got a late offer from OSU in the recruitment cycle, and it’s clear his athleticism and versatility is something OSU really liked in him. He doesn’t have Marcel Ateman size (he’s 6-2) nor does he have Tyreek Hill speed, but he can flat out ball. Also, Dez likes him, so there’s that.

5. Quinton Stewart, TE/CWB: With Jelani Woods transferring out (😭) and Logan Carter presumably moving on (he was a redshirt senior), OSU has a need for depth to emerge at its tight end/cowboy back position. Stewart, an early enrollee a year ago, could wind up being that guy. He’s a 6-2, 240-pound talent whose size and pass-catching acumen should free him up to be used in several different ways, and it’s possible he sees shine in the starting rotation. Hope OSU throws to the tight end more this season because he can be a real threat as a route-runner and possession guy down the field.