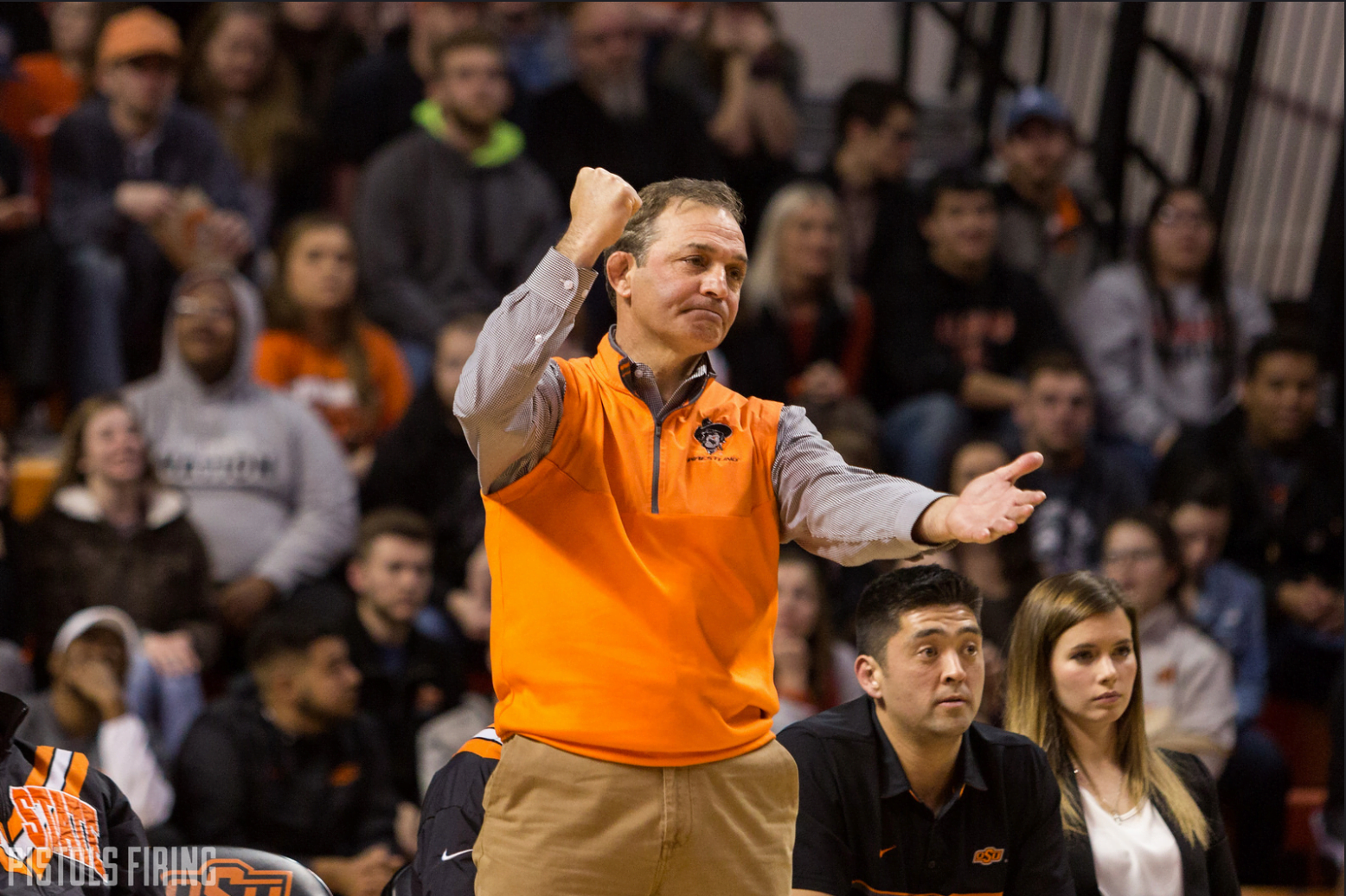 Oklahoma State wrestling coach John Smith finally got what he was looking for. The Cowboys improved to 7-1 after demolishing Kent State 42-3 on Sunday, picking up eight bonus-point victories in the process. Here are five takeaways from the dual.

Smith wasn’t pleased with the Cowboys’ 29-6 victory against West Virginia on Friday because of a lack of intensity and effort. That wasn’t the case Sunday afternoon.

This dual ended rather early because eight periods were skipped as a result of the Cowboys’ dominance.

“This team was better than we made them look like,” Smith said.

Early in Jacobe Smith’s match against Dylan Barreiro, John Smith stood up and yelled, “You better raise your level up!” to his wrestler.

Jacobe more than complied, responding with a pair of takedowns before pinning Barreiro. John pumped his fists, and Jacobe flexed to the crowd as he walked off the mat.

“Yeah, I heard him,” Jacobe said. “… I was feeling it in my thighs and legs and it was burning a little bit. I’m just thinking, not to be too wild and waste my energy.

“As soon as he said that, that attitude came across me and I just had to get a hold of him and pin him.”

Jacobe said he probably wouldn’t have raised his level had John not shouted from the bench. Jacobe said John is more vocal than most coaches he’s had in the past. Today, it paid off.

3. John Smith’s enthusiasm was on another level

Smith is typically subdued and critical after duals but animated and instructive during them. He was especially enthusiastic in his instruction Sunday, showing excitement after multiple matches. He seemed most impressed with Preston Weigel’s 18-0 technical fall.

Weigel had a thunderous takedown that got the GIA crowd buzzing. Then, he scored 12 quick points on a trio of four-point near falls. Smith sat back in his chair and clapped as Weigel finished Kyle Conel.

“I’ve never seen him do that,” Smith said. “I’ve never even seen him practice it in the room. Just vicious. I’m sure glad that wasn’t me.”

For the second time in three days, Dalton Moran was the lone Cowboy to lose his match. This time it was Isaac Bast, who defeated Moran 7-1. On the positive side, he didn’t get pinned, and the match lasted all three periods.

Moran and Bast were scoreless after the first period, and Moran briefly led 1-0 after escaping to start the second. Bast scored seven points the rest of the way, however, putting Kent State on the board.

Remember, Moran has primarily wrestled at 157 instead of 165 where he was at on Friday and Sunday. This is only his second dual appearance of the season. These matches will eventually help him as his career goes on.

5. Quick shout-out to the fans in attendance

There were plenty of reasons for fans to not show up to Sunday’s dual, yet 2,353 witnessed OSU’s most dominant performance of the season. It was far from a marquee matchup, the AFC Championship started in the middle of it, and people could have elected to attend an afternoon church service or sleep in.

Cowboy basketball players Lucas N’Guessan and Brandon Averette even walked through GIA during the beatdown. Mike Boynton was there, too, after his massive Bedlam win on Saturday. Gotta give props to those who came out and supported their team.