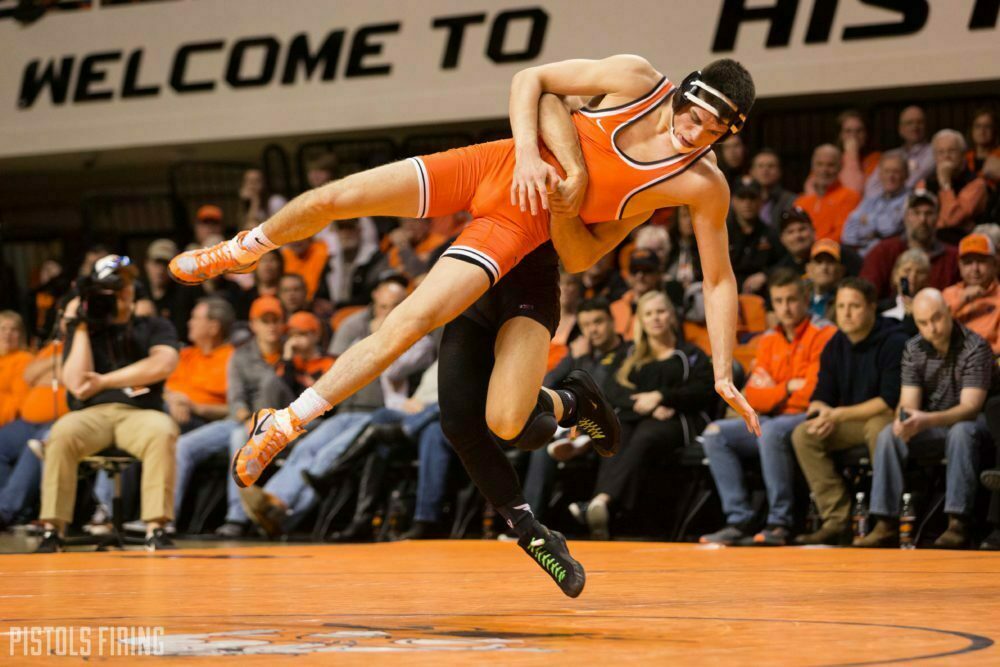 If I could conjure a theme for Oklahoma State wrestling this season, it’d be “Close, but not quite there.”

Saturday’s 21-19 loss against No. 3 Missouri was another example of that. It lived up to the hype of a top-5 dual, but John Smith’s squad left Gallagher-Iba arena with a loss. Something that should be noted before we dive into my takeaways: Smith said he was bothered by Boo Lewallen’s 8-4 loss at 149 pounds. “149 was terrible,” Smith said. “Seems, still, not sure if he should be wrestling for us.”

Here are five takeaways from the dual.

For the first time in what seemed like forever, Dean Heil was an underdog in his own house. Heil, facing third-ranked Jaydin Eirman,  was pinned in the second period Saturday. Although Heil was the lower-ranked wrestler, the result was puzzling. We could discuss possible explanations for his struggles all day, but Heil’s senior season has been a disappointment thus far.

Being a top-5 wrestler in the country would be good enough for most wrestlers, but Heil’s standards are much higher. He has won consecutive national titles at 141 pounds, and at one point, he had a 55-match winning streak. Ten duals into the season, however, Heil has three losses. Maybe he’s losing all the close matches he was winning the past couple of years, but it will be interesting to see if/how he turns it around in March.

After missing a pair of duals because of an apparent right foot injury, many wondered how Rogers would fare in his return. The answer didn’t look positive early, but Rogers rebounded after a slow start, pinning Connor Flynn to give the Cowboys a 15-12 lead. Rogers, who trailed 7-3 before pinning Flynn, said his unorthodox style helped him earn the victory.

“I love coming back from behind,” Rogers said. “Then you really have nothing to lose.”

Rogers’ style is hard to replicate because it isn’t normal. This makes it tough for opposing wrestlers to simulate a match against him because he’s so unpredictable. This was about as good of a return Rogers could have hoped for.

A look at the final score tells you the dual was tightly contested, and it was. But further examination shows how slim the margin was. Let’s take a look at Heil’s match, for example. Eirman pinned Heil, which gave the Tigers six points. Let’s say Heil holds his own, battles throughout three periods and loses to Eirman 10-5. That match would have given the Tigers only three points. The Cowboys lost by two, so Heil’s loss stings a little more than usual.

There was a somewhat controversial finish at 184 pounds, when OSU’s Keegan Moore gave up the winning point with nine seconds left. With the score tied 1-1, Moore was called for fleeing the mat, which essentially gifted Mizzou’s Canten Marriott the victory.

“Your back is against the circle,” Smith said. “It’s not like you weren’t in that position. You were in that position, get out of it. You know if you go out of bounds, it’s likely that could happen.”

4. Weigel loses for the first time this season

Through his first six matches, it didn’t look like Preston Weigel could be defeated. He outscored his opponents a combined 54-6 heading into Saturday’s dual, but No. 7 William Miklus showed us something we hadn’t seen all year: a Weigel loss.

Miklus won a 10-4 match that was largely decided in the third period, where Miklus racked up seven points. The Cowboys trailed 18-15 entering this match, so a victory from Weigel here likely would have swung the dual in OSU’s favor, especially when you look at how easily Derek White handled his opponent (a 17-4 major decision).

“I thought we were in control of it as we went into (197 pounds), I really did,” Smith said. “Knew he was tough, but after the first takedown it just seemed like (Weigel) hit a wall. I’m not really sure what it was.

“Maybe he’s winning too much,” Smith said. “I think we all thought he looked really good, and maybe he’s not ready to be that guy yet.”

Typically, when the Cowboys have two duals in one weekend, there’s an off-day in between. That’s not the case this weekend, as Smith’s squad has about 17 hours between matchups. The Iowa State Cyclones carry a 6-6 record into Sunday’s dual. That mediocre record, combined with an emphatic response from Smith’s squad, should lead to a blowout in GIA on Sunday. Watch how Heil and Weigel respond as the Cowboys host their fourth consecutive dual.