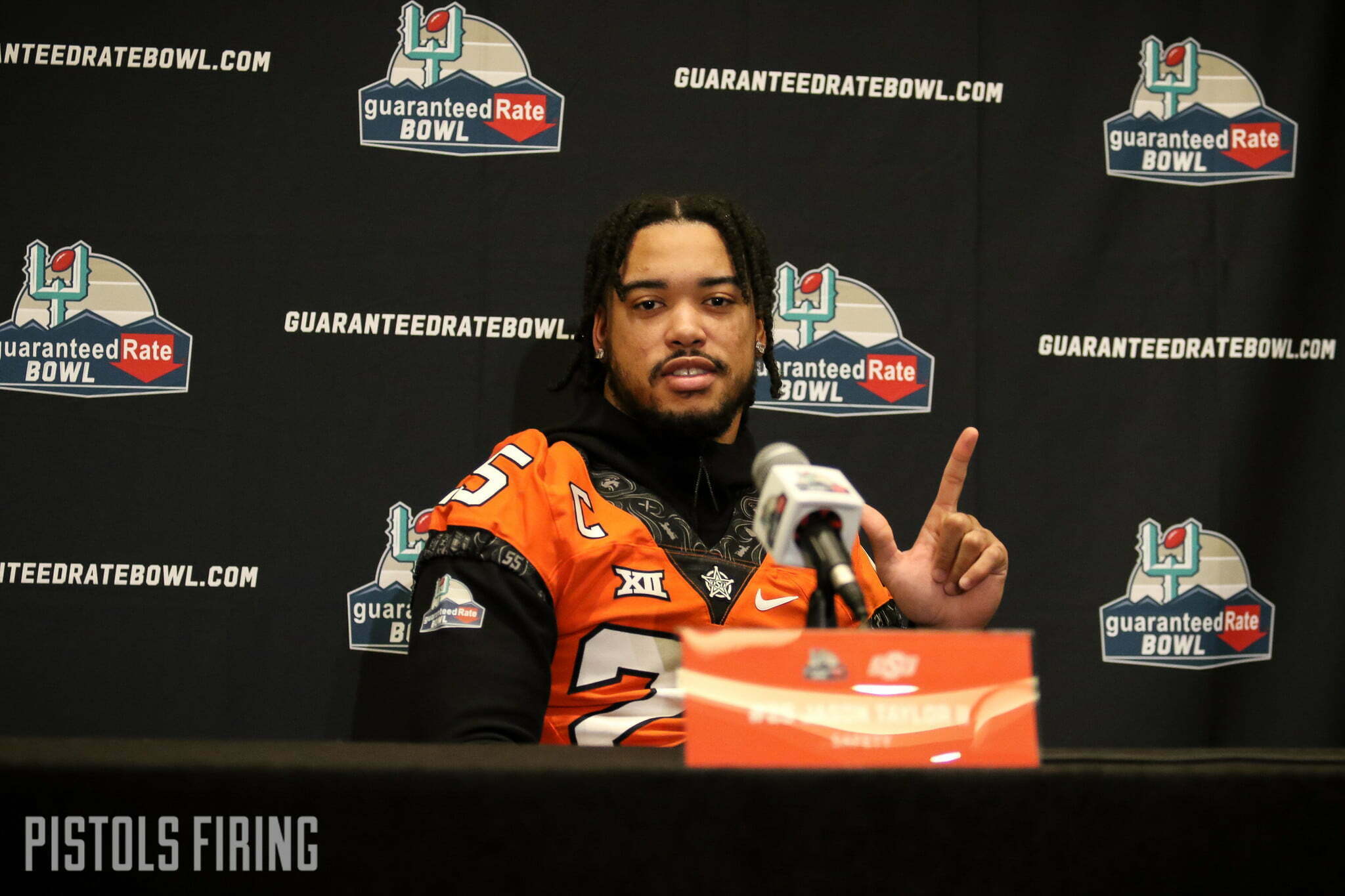 PARADISE VALLEY, Arizona — It’s been a wild few weeks for the Cowboys (and the college football landscape as a whole), but they have a chance to end 2022 on a high note.

Oklahoma State plays Wisconsin at 9:15 p.m. central time on Tuesday in the Guaranteed Rate Bowl. The Cowboys had a media day Monday afternoon in the Phoenix area. Here are five things that came from it.

1. Still No Announcement from Jason Taylor

Oklahoma State’s latest All-American, Jason Taylor has a decision looming after the Cowboys are done in the Valley of the Sun.

A senior, Taylor has an extra season of eligibility left because of the pandemic. With Mason Cobb en route to USC, Taylor enters Tuesday’s game leading the Cowboys in tackles with 87. He also leads the Pokes in solo tackles (72) and interceptions (six).

Should Taylor choose to return in 2023, it’d be another boon for the Cowboys’ defense, which is set to return safety Kendal Daniels and edge rusher Collin Oliver, and the group has done well in the portal with additions Justin Wright and Anthony Goodlow from Tulsa.

“I’m not quite sure when [the decision will] come,” Taylor said. “But I’m just going day by day. I’ve still gotta decide obviously. Got to talk with my family and try to figure out what’s the best decision whether it’s coming back or declaring. I just gotta still figure out that.”

Garret Rangel has had a decent amount of playing time for a freshman quarterback this season, but for a good chunk of the Cowboys’ bowl prep, Rangel has been the guy after Spencer Sanders entered the transfer portal Dec. 5.

In three games, Rangel has thrown for 482 yards and two touchdowns a year removed from slinging it around for Lone Star High School in Frisco. According to his Cowboy back, Rangel’s progression is visible.

“He’s developed awesome,” Braden Cassity said. “He’s exceeded my expectations by far, by a lot. This whole bowl prep, he’s getting guys fired up when they’re in the huddle, things like that, just getting everyone to come along.

“It’s crazy how smart he is. … He has football intelligence. I haven’t seen anything like that in a while.”

When asked for examples of how that football IQ has shown through, Cassity pointed to Rangel’s ability to navigate the offense when the Cowboys are going up-tempo.

“It takes a lot,” Cassity said. “There’s a lot of memorization that goes into it. We probably have over 50 to 75 turbos and they do take a while to memorize, but he’s just boom, boom, boom, hitting on all cylinders picking them up.”

As with Sanders on the offense, the Cowboys also lost a big part of their defense in Mason Cobb.

Cobb led the Cowboys in tackles during the regular season with 96 and tackles for loss with 13. With Cobb headed to Hollywood, expect Lamont Bishop, Nick Martin and Donovan Stephens to increase in workload alongside Xavier Benson.

Bishop, a redshirt senior out of Iowa Central Community College, has 20 tackles on the year to go with 2.5 tackles for loss, a pair of quarterback hurries, a forced fumble and a safety.

Then Stephens, a redshirt freshman from Del City, has just one tackle.

“[Bishop is] getting a lot of reps,” Gundy said. “Now he gets a majority of it based on taking [Cobb’s] role and filling his shoes. He’s practiced well. He’s another guy who’s been enthusiastic and has practiced well and has been running around.

“The difficulty of guys that transfer or opt out or whatever you want to call it, is not something that any of us are familiar or comfortable with, but it does give those other guys, like you mentioned with Lamont, an opportunity to play in the game. So for those guys it’s a pretty cool deal.”

Sixty-one games and 141 tackles later, Brock Martin is set to play in his final game as a Cowboy on Tuesday.

Martin, a super senior out of Oologah, was a three-star recruit in the 2017 class. He chose Oklahoma State over offers to Baylor, Kansas State, Texas Tech and others. Despite myriad injuries suffered through his career, Martin has played in at least 11 games every year of his career (aside from redshirting in 2017).

He has rightfully earned the moniker as a tough guy, and the 15 career sacks he has under his belt make him more than a solid role player.

For years after 2022, tough, old-school players at Oklahoma State will be compared to the likes of Brock Martin.

“I don’t know,” Martin said. “It feels good that it’s almost over, but it sucks that I’m leaving, type a deal. I’ve been here six years. I think I’ve probably bled and sweat about as much as anybody in this program, maybe more. I gave it my all for six whole years, and as much as I’m gonna miss this place and miss playing for Oklahoma State, I think that I’m ready to move on and get this next chapter started.”

The Cowboys have six captains for the Guaranteed Rate Bowl. Here is a look at the group:

One of those things is not like the other. Out of Missouri City, Texas, Richardson is second on the team in touchdown catches this season with four. He has 47 catches for 482 yards.

The captaincy is team-voted, making Richardson getting the honor at such a young age even bigger of a deal.