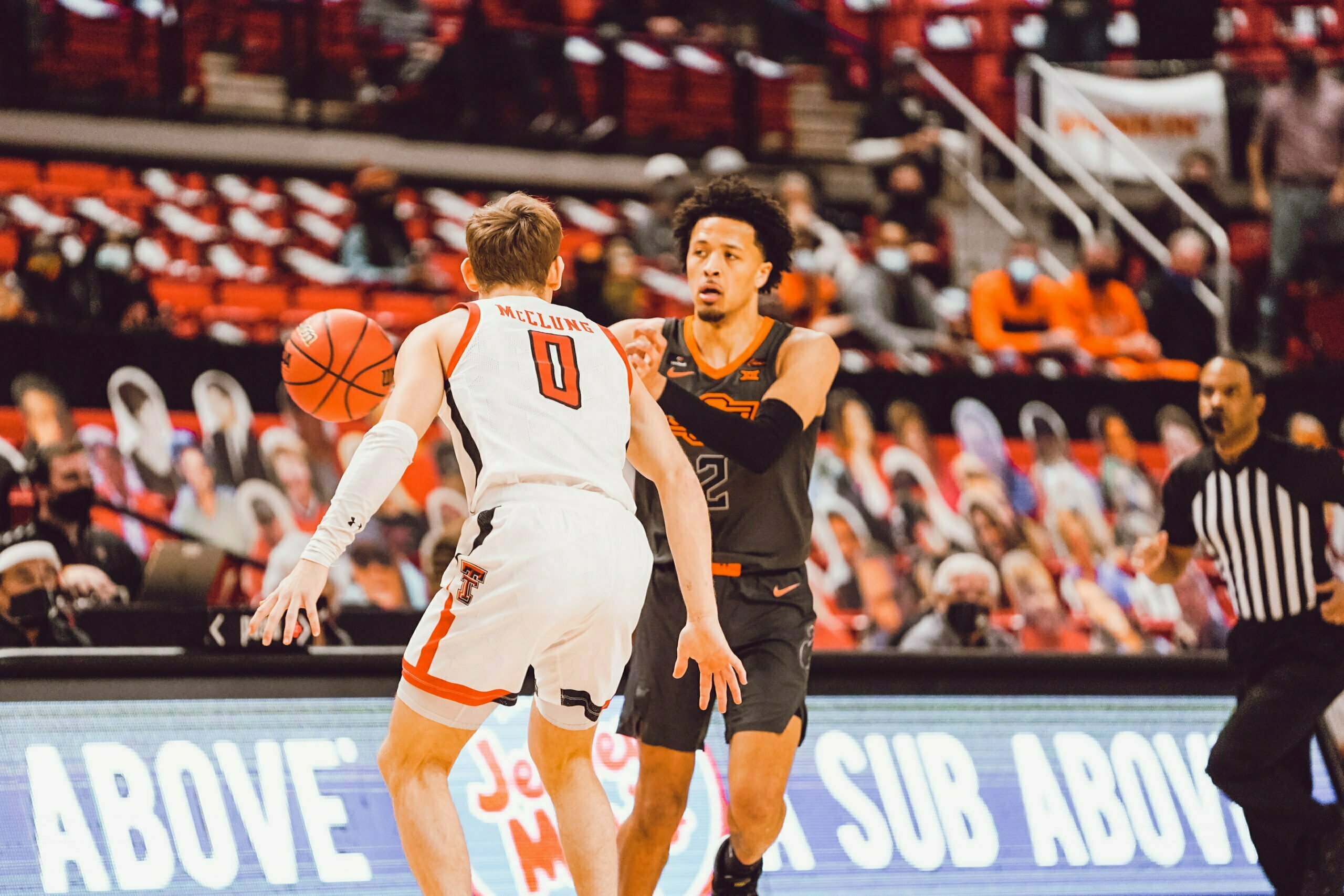 Oklahoma State will host Texas Tech in its last non-Bedlam regular season game of the year (at least as the schedule sits now). Here are five things to be aware of before the Cowboys and Red Raiders tip off on Monday night.

1. A Season-Long Streak is on the Line, for Both Teams

With a win on Monday, the Cowboys would string together three-straight Ws for the first time in league play this season. Conversely, that outcome would result in the Red Raiders leaving Stillwater on their worst skid this season. Tech is coming off back-to-back losses, at home to West Virginia and on the road to Kansas.

Thanks to their recent skid, the Red Raiders are sure to drop when the AP ranking is posted Monday. The Cowboys, however, would need to climb just one spot to sneak back into the AP ranking at 25. Since last week’s Top 25 ranking was published, OSU is 1-0 against a two-win Iowa State team while No. 19 Tennessee got rocked by an unranked Kentucky team, so we’ll see.

If OSU does rejoin the ranks of the APs’ favorites, it would make Monday night the first ranked-on-ranked meeting in this series since 2004.

The then-No. 18 Cowboys bested the No. 13 Red Raiders in GIA 70-66 on their way to a Big 12 Championship and a Final Four appearance. Tony Allen dropped 20 points on the Red Raiders in that one (first-team all-everything) while John Lucas III nailed some clutch free throws down the stretch.

This will also represent the eighth straight matchup between these two teams in which Tech is ranked in the Top 25. OSU is 3-4 so far during that stretch but has taken the last two.

This will be the final chance to see two of the top scorers in the country go toe-to-toe, at least in the regular season. Cade Cunningham leads the conference at 18.6 points per game, and Mac McClung is fourth averaging 16.9.

The last time these two met up, Cade Cunningham managed just 13 points on 3-of-12 shooting before fouling out, while McClung poured in 21 points.

But over the last seven games — since his five-point season low against K-State — Cade is averaging 19.8 points per game and is white hot from deep, shooting 52.5 percent from 3. Let’s hope for a firefight.

Joe Lunardi’s latest Bracketology projection has both OSU and Texas Tech in Region 1 with the Cowboys an 8 seed and the Raiders a 4 setting up a possible rematch in the Sweet 16 (Gonzaga who?). But there’s still a long way to go before Selection Sunday.

The good news for both teams is that playing in the Big 12 offers plenty of opportunity to build your resume.

OSU’s six road wins is tied for ninth-most among NCAA N.E.T. Top-100 teams, and the Pokes’ five Quadrant 1 wins is tied for eighth most. One of those road wins came courtesy of the Red Raiders when the Cowboys took home an overtime win (an their first Big 12 victory) from Lubbock back on Jan. 2.

5. And They’re Still Jockeying for Position in the Big 12

Aside from their seeding come Selection Sunday, the two teams are also fighting for their place in the conference’s pecking order.

OSU and Tech are currently half a game apart in the league’s standings with the 7-6 Cowboys sitting at sixth and the 6-6 Red Raiders at No. 7. Just ahead of the pair are West Virginia at 8-4 and Texas at 7-5.

UT has ranked matchups against Kansas and at Tech remaining while West Virginia has three games left (road trips at TCU and No. 2 Baylor and a home finale against Kansas State).

The Nos. 4-7 spots in the Big 12 are a logjam with less than two weeks left in the season. OSU’s trip to West Virginia, which was canceled due to COVID, has yet to be rescheduled.

So all of that to say that while every Big 12 game matters for OSU, this one matters to both teams.