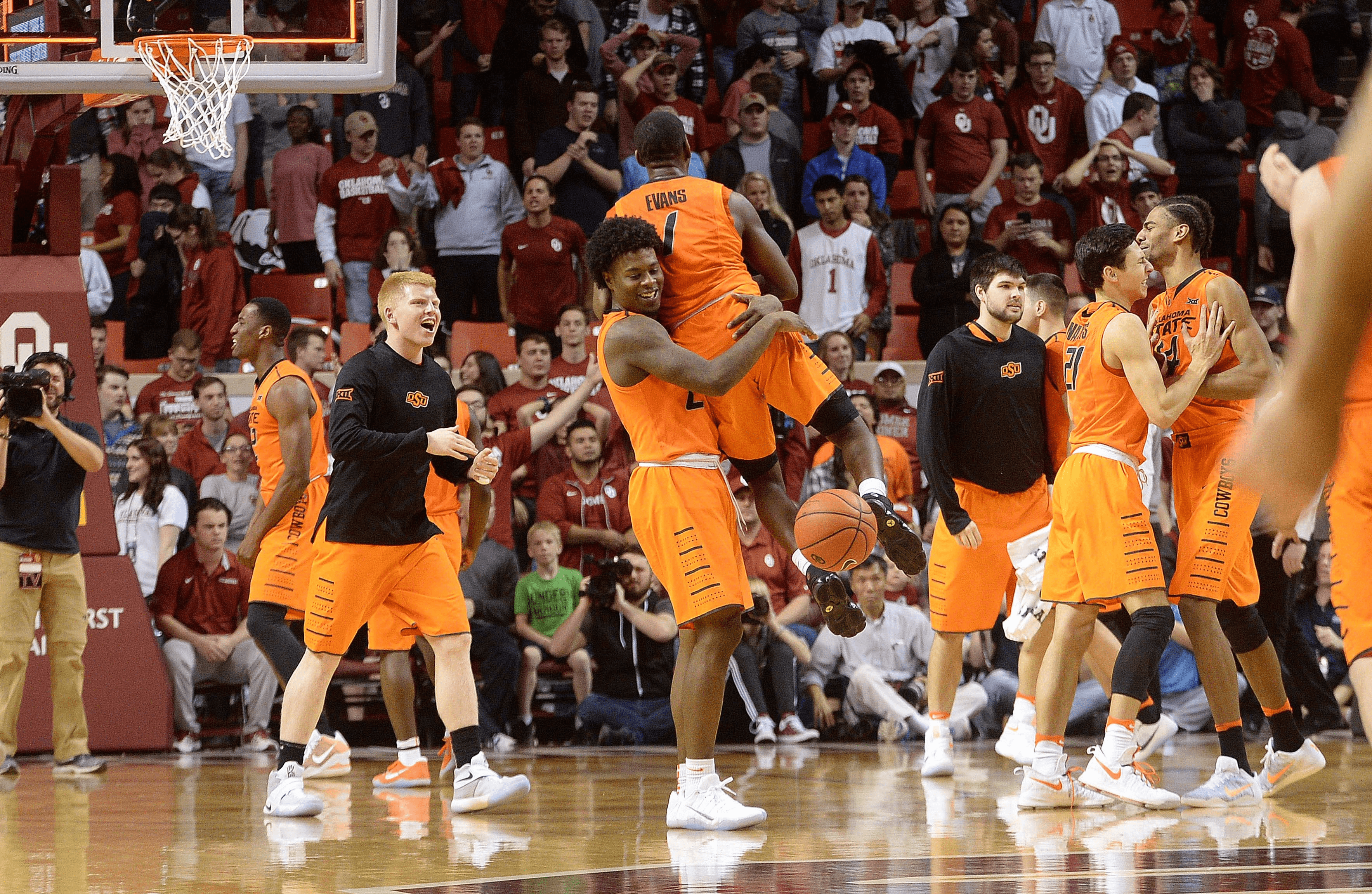 If you’re going to exorcise some Bedlam demons in Norman, there is no better way to do it than with an arrow right through the heart of Sooner Nation from 23 feet away delivered by the haughty hands of 14-year super senior Phil Forte.

Forte rescued the Cowboys from yet another late-game offensive meltdown and ended more than a decade (!) of Bedlam misery in Norman. OSU beat OU 68-66 on Big Monday and extended its winning streak to four games. It ends the first half of the Big 12 season 3-6 which feels a long way from where it will end the second half.

1. Phil Forte is a Bedlam Hero

It’s a shot that won’t make waves on the national landscape. It won’t decide the Big 12 title. It is not one of the more famous shots, even, in OSU history. But for right now in 2017, with what was at stake in this game and with the gorilla OSU had on its back coming in, that shot was a big deal.

Without winning this game, OSU doesn’t make the NCAA Tournament. I believe that. And the improbability of actually winning when OSU was down three and Jawun Evans had just missed a layup for what felt like the 13th time in the second half with 29 seconds left was astounding. KenPom gave OU about a 94 percent chance of winning at that point. But then Mitchell Solomon (of all people!) got a steal and Evans nabbed another one from Jordan Woodard before setting up Forte for the dagger. I said this on our postgame show, but Forte looked like a character from Hoosiers with one foot about three feet in front of the other in his throwback set shot pose. Bottoms, though, and history was upended.

Phil Forte on his game-winner in Norman. #OKState pic.twitter.com/Bz13b9xHIi

2. We Need To Talk About Jawun

More specifically, we need to talk about the fact that Oklahoma State was two for its last 15 mostly because Jawun put on his Marcus Smart cape and played like he was trying to win Bedlam basketball and football for the next five years in the last 10 minutes.

In the last six minutes, Evans had five missed layups and two turnovers. OSU’s offense completely fell apart — sometimes because guys weren’t where they should have been when he was looking for them, and also because he wasn’t looking to pass which caused guys to just stand around and twiddle their thumbs.

Evans is great when he’s doing stuff like this or drawing fouls (he shot 16 free throws on Monday). But too often he forces the issue and doesn’t get the call. There’s wisdom in knowing when to go and when to pull up, and No. 1 doesn’t always display it.

He finished 5-20 from the field with four assists and five turnovers. That’s not a line I’m hoping to see if I’m Brad Underwood. Also, OSU’s regular offense has never looked better. Why do they go all Mike Gundy late in games and hide behind Evans when they should be doing more of this?

This is some basketball! pic.twitter.com/RmaJc0Af7K

“To finish the game two for your last 15, that’s kind of a helpless feeling as a coach,” Underwood said after the game. “You don’t quite know where to go. To shoot 33 percent on the road and you have to find a way to win. That was an NCAA-tournament like game where things get really hard and nothing is easy. Twenty offensive rebounds was huge.”

He’s right — and the effort of Mitchell Solomon, Jeffrey Carroll, Leyton Hammonds and Davon Dillard on the boards (25 combined) cannot be overstated. It was probably what won OSU the game (the Pokes grabbed 46 percent of available offensive boards and 77 percent of those available on defense).

3. OSU Stayed In Its Lane

At halftime I tweeted that OSU simply needed to keep doing what it was doing. They shot 32 percent in the first half and only trailed by one. OU shot 50 percent. That has to even out. Or I thought it did.

In the end, OSU out-rebounded OU by 13, got 46 percent of available offensive boards, took 10 more field goals, two more free throws and turned it over on just 15 percent of possessions (to OU’s 17 percent). You should pretty much always win when all of these things happen.

It’s partly bad luck and partly strong interior OU defense that caused OSU’s 33 percent shooting night. Those aren’t going to happen very often. But kudos to Underwood and Co. for not panicking at halftime and changing what essentially worked in the first session.

The Pokes finished 10-26 from downtown which doesn’t sound all that great until you realize that they also only made 10 2-pointers. OU really bunched up its defense inside the lane and went under picks all night which left Evans, Forte and Lindy Waters open from deep. They took advantage. OSU built a 10-point lead with just 12 minutes to go.

Waters in particular was terrific when OSU needed it. He went to high school just 4.9 miles from Lloyd Noble Center, and it was clear he came back to burn the place down. He finished 3-3 from deep and 4-5 overall which added up to 11 points in 18 minutes.

OSU took what OU gave them, and it looked ready to run away in the second half before finding ice down the stretch. OSU is at its best when it attacks the rim. Lon Kruger smartly coached against this, and the Cowboy sharpshooters made him pay dearly at the beginning of the second half.

Brad Underwood just matched Travis Ford’s 2015-2016 total in terms of Big 12 road wins. This is partly because he’s a better coach but also because winning on the road in the Big 12 is not a joke. These Ws should be savored, and this one will be. OSU has now set itself up to make a legitimate run into the NCAA Tournament.

After going 3-6 in the first half of Big 12 play, it needs to reverse that and go 6-3 in the second half to get in. A 5-4 record over the next month might do it as well. It’s difficult to see an 8-10 Big 12 team that beat UConn, Georgetown, Arkansas and Wichita State getting left home for the dance.

Either way, OSU’s final nine games in conference play should be more exciting than a live feed of Mike Stoops during a big game against a monstrous offensive team on the other side of the field. And no matter what, that 12-game Norman losing streak is gone forever. Shoot it into the sun, and may we never re-visit it again.

• It feels like Forte has been in Stillwater for 27 years because he feels very much like an extension of Keiton Page. Like they’re the same person. Maybe this is obvious to everyone else. Maybe I’ve mentioned it before. Maybe I just miss Perry Ellis. IDK.

• If I’m an OU fan, I’m flabbergasted at that final 30 seconds. Turning it over to Jawun is understandable, but flipping the ball to Solomon under his own goal? Indefensible! The posts would not be pretty if this was an OU blog.

• Davon Dillard remains a dude. Five boards and a steal in just 11 minutes. He has been terrific at doing what he does best over the last few weeks. Also, I’m pretty sure I saw Underwood tell him, “You have to make layups.” I feared for the lives of everyone within a 15-mile radius thereafter in anticipation of the impending dunk from No. 24.

I ORDERED A SKINNY LATTE AND THERE IS WHOLE MILK IN THIS THING pic.twitter.com/QMaV4AHjpu

• This was awesome. Frozen is terrific.

These are on each of the #Sooners student section seats. #Bedlam at its finest. pic.twitter.com/AfZsNScyih